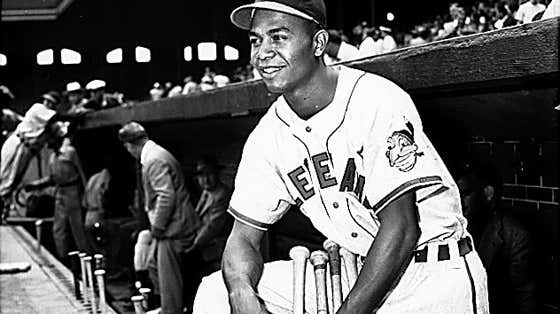 Larry Doby before making his debut with the Cleveland Indians in 1947.

Three months after the debut of Jackie Robinson, Larry Doby becomes the first black player in the American League. Doby’s debut comes striking out for the Cleveland Indians in a pinch hitting for Bryan Stephens in the seventh inning against Earl Harrist of the Chicago White Sox at Comiskey Park. Doby was signed two day earlier from one of the top Negro League teams the Newark Eagles.

Larry Doby was born in Camden, South Carolina on December 13, 1923. His family later moved to Patterson, New Jersey where he excelled in three sports, earning All-State honors. After accepting a basketball scholarship to Long Island University, Doby chose baseball by signing with the Newark Eagles at the age of 17. The war would interrupt his career, as he served two years in the Navy. After playing part of the 1945 season in Puerto Rico, Larry Doby returned to the Newark Eagles in 1946 and was part of one of the greatest teams in the history of the Negro Leagues. The 1946 Newark Eagles featured four future Hall of Famers, including Doby who was an All-Star and hit .360, before having a big Negro World Series against the Kansas City Monarchs leading, the Eagles to the championship.

Cleveland Indians Owner Bill Veeck was a major proponent of integrating baseball. In 1942, Veeck attempted to buy the lowly Philadelphia Phillies and stock their roster with stars from the Negro League. However, Veck’s attempt to buy the Phillies was blocked from Commissioner Kennesaw Mountain Landis, who was segregationist who refused to allow blacks to play in the majors. In 1946, after the passing of Landis, Veeck was successful in his big to buy the Cleveland Indians. Still seeking to integrate baseball, Bill Veeck took interest in Larry Doby, shortly after Jackie Robinson made his debut with the Brooklyn Dodgers. Nervous, that Doby would go to the New York Yankees, Veeck paid heavily to purchase his contract from the Newark Eagles. The Eagles were run by Effa Manley, who would later become the first Woman in the Baseball Hall of Fame. Manley, showed she was quite savvy as she got $15,000 for her second baseman’s contract.

Larry Doby struggled in his first season in the majors as he played sparingly over the second half, batting .156 in 29 games. He would become a regular player for the Tribe, batting .301 as he switched to the outfield. Larry Doby, who would be joined by Satchel Paige on the 1948 Indians were among the first African Americans to win a World Series. Following the 1948 World Series, Larry Doby became a seven-time All-Star, as he twice led the American League in Home Runs in 1952 and 1954, also leading in RBI in 1954. Doby, who finished second in MVP voting in 1954 was traded to the Chicago White Sox after the 1955 season. Leg injuries slowed Doby down over his final four seasons as he returned to the Indians and spent time with the Detroit Tigers before retiring after the 1959 season. After retiring Larry Doby, gave baseball clinics for the U.S. State Department, which led him to come out of retirement in 1962 and play Chunichi Dragons of the Nippon Baseball League, as one of the first Americans to play professionally in Japan.

While Jackie Robinson, got the accolades he deserved for breaking baseball’s color barrier, Larry Doby’s accomplishment were greatly ignored. In 13 seasons, Doby finished with a .283 average, with 253 home runs and 970 RBI, while facing the same amount of hate Jackie had to deal with, as the National League and American League were as separate as two leagues could be at the time, with restrictions placed on teams trading players from one league to another. Three decades, after becoming the second African American player in the majors, Larry Doby became the second African American Manager, leading the Chicago White Sox as an interim manager in the second half of the 1978 season, serving the first part of the season, as the team’s hitting coach. Doby would leave coaching following the 1979 season, and spent a decade working in the front office for the NBA’s New Jersey Nets.

Larry Doby would later serve as an assistant to American League President Gene Budding in 1995 as he final got the recognition he deserved. In 1994, the Cleveland Indians retired #14 in his honor. Meanwhile, Yogi Berra his neighbor from Montclair, New Jersey began lobbying to get Doby elected to the Baseball Hall of Fame. The efforts to get Doby enshrined in Cooperstown became successful in 1998, when he was chosen by the Veteran’s Committee. Before he died in 2003, Doby received a big honor from his hometown Patterson, New Jersey when they named a park in his honor. While, Berra gave Doby a win inside his Hall of Fame on the campus of Montclair State University. In 2012, Doby would appear on a postage stamp honoring baseball All-Stars, he later had a statue unveiled outside the Indians’ Progressive Field in 2015.