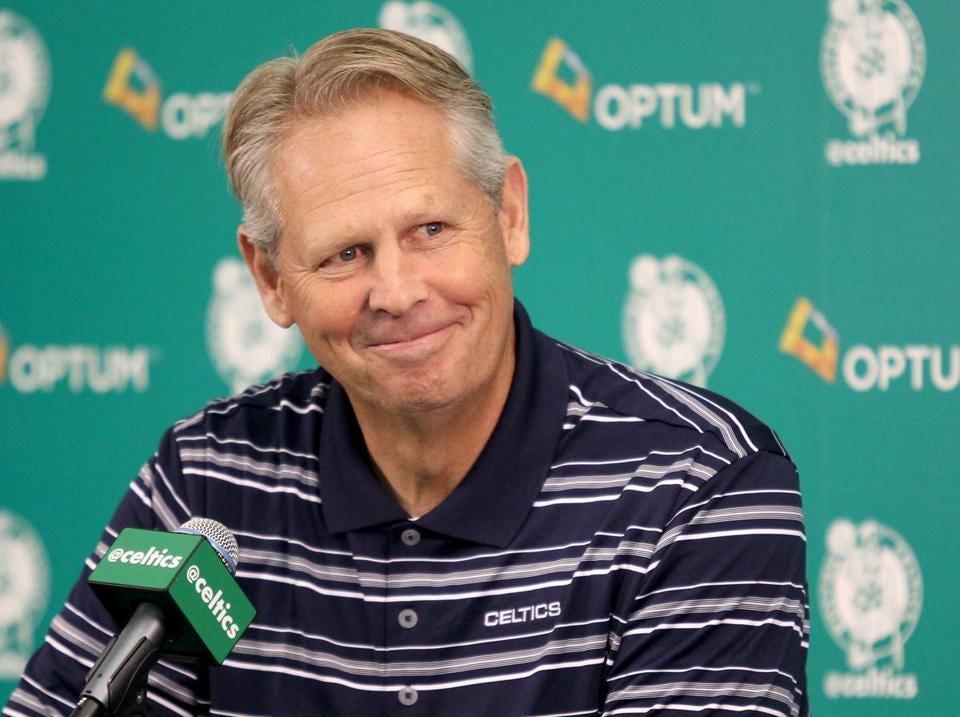 There are two stances you can have when it comes to this deal and the Boston Celtics. You can be pissed, consider this another instance where Ainge dropped the ball, or you can understand why perhaps the Celtics weren’t in on this deal. One isn’t more correct than the other, both have passionate takes to support the claim, so before I get all hot and bothered about this, let’s look at each side so people can understand the whole picture. I think it’s important that we talk about absolutely every possibility of why things went down the way they did, even if they are ridiculous (like attitude for example). At the end, it’ll be up to you to make your own conclusion.

Understandably, this is a pretty common thought today. What’s the point of having all these assets if you don’t use them when a foundational player becomes available is a very logical question. I mean that was the whole point of the BKN trade in the first place right? Ainge held those picks close to the chest in prior years so he would be in a position to pounce when such a player became available. Then one did, and he did nothing. So by THAT way of thinking you could say he dropped the ball. The vast majority of Celtics fans anger about this is probably due to what the final package was. It’s not true to say Ainge and the Celtics couldn’t have topped the package NO sent over, which means they more than likely made the conscious decision to not beat it, which I imagine can be annoying to some.

There is also shit floating around Twitter (take this with a grain of salt) around an idea first brought up by Zach Lowe. This being that Stevens wants nothing to do with Boogie, and as a result Ainge sided with his coach instead of siding with NBA talent, which is something you should almost NEVER do in this league. I think there is some truth to Stevens’ concern, but I also think that in well run organizations, there are a thousand different factors that go into making a deal of this nature. If the goal of this rebuild is to bring in top tier talent, then I can understand getting on Ainge for taking the side of his coach/chemistry. There is maybe one coach in the entire league that you take over a player, and that’s Pop. That’s not to say Brad isn’t climbing the ranks of elite coaches in the NBA, but he is not at the point where you turn down blue chip players solely because the coach doesn’t like him. So if you’re mad about that, I get it.

I don’t think we need to spend too much talking about how Boogie from a talent perspective is exactly the type of player Ainge said last week on the radio they are looking for. He’s a skilled big man who doesn’t clog the paint, can score at will, and most importantly, can rebound. It’s only right to be a little frustrated that a player that checked off all the basketball boxes was available, and he still passed. When you look at the current roster and the current Celtics system, it’s hard to find a way from a basketball standpoint that Boogie doesn’t fit. It allows Horford to play more PF which he 100% prefers, and it gives you another dynamic offensive threat to surround this version of Isaiah Thomas (it’s different from SAC Thomas).

Personally, I’ve always been of the thinking that if you take Boogie out of SAC, a lot of the issues that have plagued him throughout his career disappear. Winning does cure all, and with the Celtics strong direction/front office/veterans/coaching I really do think he could have worked. Perhaps you feel that way too and that’s why you’re angry.

While everyone seems to be an expert on Twitter (myself included duh), the fact of the matter is unless it comes from Woj/Stein, none of us know shit really. It’s very easy to say, “Look at what NO gave!!! There’s no way Ainge couldn’t beat that!!” Well, hold on a second. Just because NO ended up taking a shitty deal, doesn’t mean that with every team they talked about Boogie with, they discussed a shitty package. Remember every GM in the league knows the Celtics can’t use all their picks, and it shouldn’t be that outrageous to think that even if they are talking about lesser deals with other teams, that they are asking for a better package from Boston. For example they clearly wanted to get into the 2017 Draft, well the only pick the Celtics have in that draft is the #1 pick. What if they wanted Jaylen + BKN ’17 and like the MEM 1st? That’s certainly reason enough for Danny to look elsewhere in my opinion. The point is, we don’t know what the official asking price was, so it’s not really fair to say all offers are created equal. Is it possible that Ainge could have made other moves to get another 2017 pick, sure, but then that might fuck up something else. Until I see it being reported as 100% fact that Ainge turned down like Rozier/lower future 1sts for Boogie, I’m not going to kill him for not trading away his best assets.

Ainge has also made his stance pretty clear. He does not want rentals. While Boogie has one more year left on his deal, he now doesn’t have that incentive to stay and sign that 200M max that he could have gotten in SAC. It’s been floated around for a long time that he will not commit to signing an extension with any team he’s traded to. Why should he? After being stuck in SAC his whole basketball career, why wouldn’t Boogie want to test free agency? In that regard, I again can understand why Ainge held off. It’s not worth giving up anything when you could potentially just sign the guy in free agency.

While I don’t believe this is going to happen either, there’s also this

I know I preach about not falling for this type of stuff with Butler, but go along with it for a second. If the Celts were too focused on getting Butler, that tells me that SAC wanted pieces that Ainge was trying to use in THAT deal. Now whether or not that happens, time will tell, but I think we can all agree that Butler is the better play here.

There is also the possibility that as an organization, the Celtics did not feel that bringing in Boogie gets them past CLE or GS. For us fans that’s hard for us to comprehend because of how good a talent he is, but it’s not that far fetched. Again it all comes down to the price they would have to pay, and that’s something we don’t know. But it would appear that the Celts making the conscious effort to not beat out that offer tells me they don’t think he’s the guy. If you want to dog Ainge on his draft history fine, but the one thing he is NASTY at, is evaluating existing NBA talent.

It’s also important to remember we are talking about the Kings here. The package they got to the rest of the world may seem like shit, but they have a gigantic hard on for Buddy Hield. They wanted him the year he was drafted, and for some reason they are obsessed with him. So let’s say Ainge presented something that may have looked better on paper, the Kings probably go with this deal anyways because they want the 2017 pick and the player. That’s no reason to kill Ainge in my opinion. You can’t get in trouble for someone else’s stupidity in my mind.

For me, I’m disappointed, but not angry. I’ve long been a Boogie guy, and prior to last year’s draft I probably would have been OK with dealing a pretty penny because Boogie had multiple years left on his deal. Now? I’m not going to say Ainge dropped the ball because 1) I don’t know what the offer was 2) I’m OK with passing on a guy who probably hits the open market anyway. That doesn’t completely leave Ainge off the hook though. I’ll be pissed if they Celts come out and say they made their best offer and SAC went another direction, all without telling us what that offer was. If they own it and say as an organization they decided not to pursue it, I can live with that. I may be in the minority, but I’ve never needed Ainge to make a gigantic splash this deadline. They have areas they need to address, and can do it with guys who are less of a risk. Remember, the whole idea of this rebuild is to show other players in the league that BOS is close, and an attractive destination. What if other players don’t want to play with Boogie? Who knows? If the Celts are able to find that rebounder, get healthy, they have just as good a chance to reach the ECF as if they gave up assets and got Boogie I would argue.

But that’s just my opinion. What say you?