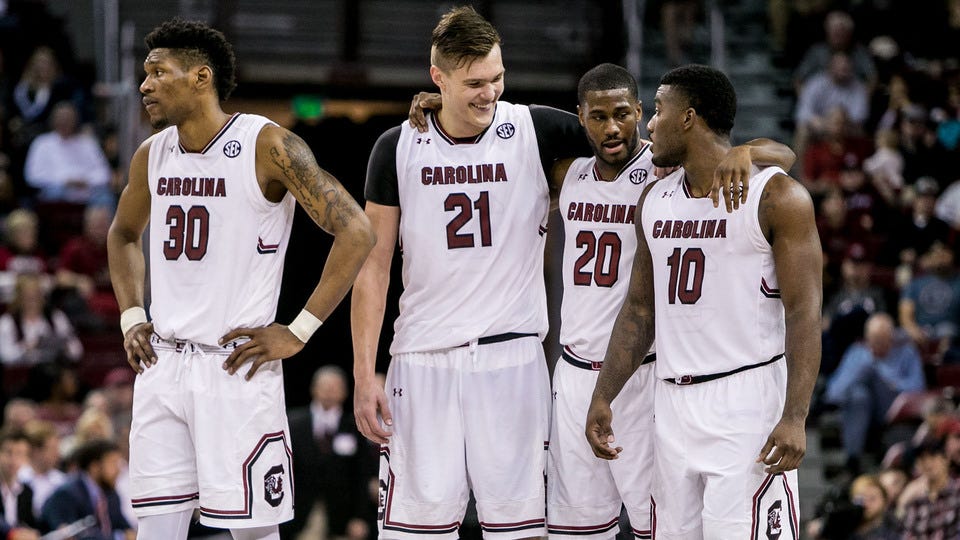 If you asked most casual fans right now who was winning the SEC the majority of people would assume it was Kentucky. Some may even say Florida after the last week or so. But, they’d be wrong. It’s South Carolina, who is 9-1 in the conference, ranked 19th and 16th in the polls and doing it all from a defensive standpoint. That’s what this blog is going to focus on as South Carolina has the No. 1 defense in the country, holding teams to 86.8 points per 100 possessions.

It is somewhat surprising to see the success South Carolina has had this season when they grade ‘below average’ per Synergy in total offense. They rank in just the 30th percentile in total offense, scoring just .876 points per possession. The Gamecocks only have three guys averaging double digit scoring, however Sindarius Thornwell (the leader at 19.1 ppg) can play with anyone in the country. After him it’s sophomore PJ Dozier (a McDonald’s All-American) at 14.1 ppg and Duance Notice at 10.5 ppg.

What this team has though is depth. Frank Martin has nine guys averaging double-digit minutes while another five play at least six minutes per game. It’s remarkable how he trusts this team and will throw numerous lineups out there. This allows them to get after you defensively, especially since they only press about 4% of the season.

So how exactly is this team giving up just .754 points per possession ranking in the 100th percentile? First, they are extremely physical. They aren’t afraid to foul, thanks to the depth that they have and the fact they know they can force turnovers due to questionable officiating. Can this bite them in the ass? Sure. They do give up an insane amount of free throws (48.5 FTA/FGA).

They play man the majority of time, mixing in a zone about 18% of the season. Essentially the main goal of the defense is to space the perimeter, not letting the ball inside and protecting the paint. The actual theory of Martin’s defense isn’t to go for steals, but rather let the steals happen by the other team getting careless or frustrated. This isn’t a defense that will gamble like you see a West Virginia or Oklahoma State team do. Rotate and recover is the motto of South Carolina. You’ll see them bring a big over to help at the rim while guards will rotate onto the other big.

Watch this play here against Georgia over the weekend. The South Carolina guards will switch on the handoffs not letting Georgia turn the corner. On the first ball screen, the South Carolina big steps back letting the guard get through the screen easily as the Georgia big isn’t a threat to shoot. That’s incredibly smart. Then as the drive happens in an ISO set, look at the rotation off the second big in the post. He’s able to cut off baseline as the guard swipes from behind. All leading to a run out alley oop. This is where the lack of gambling forces a turnover.

What South Carolina kills you on though is the pick and roll. This is where they force the most amount of turnovers (per Synergy) at 27.2% of possessions. Teams run the PnR the second most behind spot up shooting as South Carolina has seen this in 302 possessions. They are giving up the least amount of points (.573 points per possession) while teams are scoring just 27.8% of the time in this set.

It starts with the pressure on the ball combined with the way South Carolina guards the wings – almost in a faceup denial. Then when the screen comes South Carolina knows how to either switch, hedge or double. We get to see it all in this clip against Missouri. The first ball screen is a switch leading to a cross court pass, where we see some of the South Carolina rotation. The second ball screen is another guard on guard switch where we get to see the post principals of the defense. Take a look at where the help side defense is, especially with the fronting of the post. 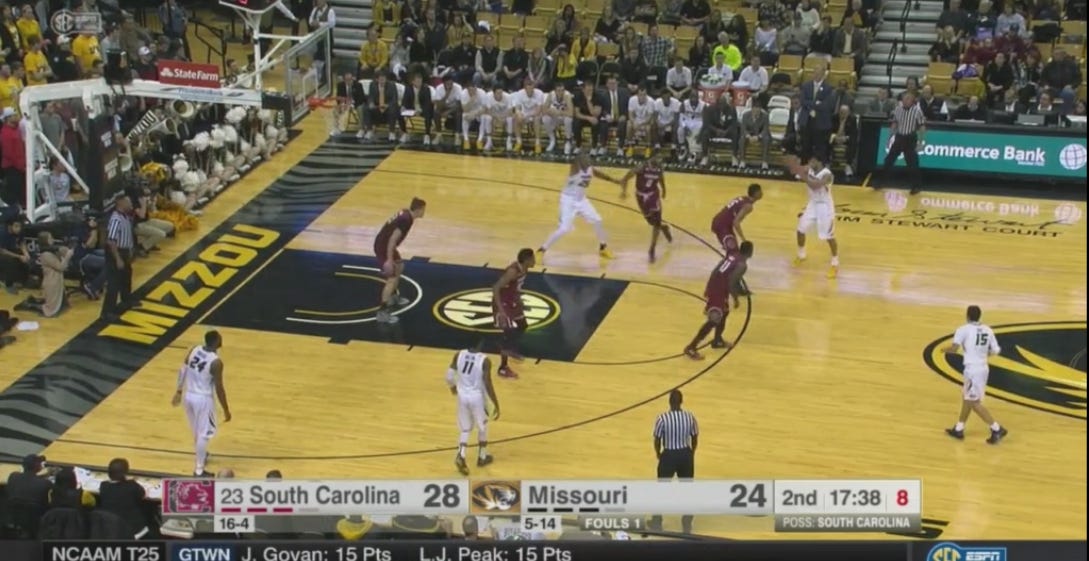 So what’s to make of this South Carolina team? They can play with anyone in the country. They have wins over Syracuse, Michigan, Florida and Georgia twice. But, they have lost to Seton Hall, Memphis, Clemson and got blown out by Kentucky (when neither team had its starting PG). I do get concerned about the offense with South Carolina. In college basketball you need a good offense, especially come NCAA Tournament time. However, Thornwell is good enough to carry this team with a 30-point game while Dozier can be the second-fiddle.

Again, this feels like a Sweet 16 team – similar to some of the early Bo Ryan and Tony Bennett teams. The only difference being they play more uptempo than those teams and actually play rather fast with the 135th fastest tempo in the country. It wouldn’t shock me to see them hold on and win the SEC as their two toughest games left are at Florida and vs Tennessee with a one-game lead.

What you do need to watch is how Frank Martin continues to recruit after this year. He’s finally getting his guys in the system and prefers the athletic wings/guards that can guard multiple positions. This lets him work the defense like this, switching ball screens and handoffs. Regardless, it’s been a wildly successful season so far for South Carolina, especially to rebound from the disaster that was the second half of last year.