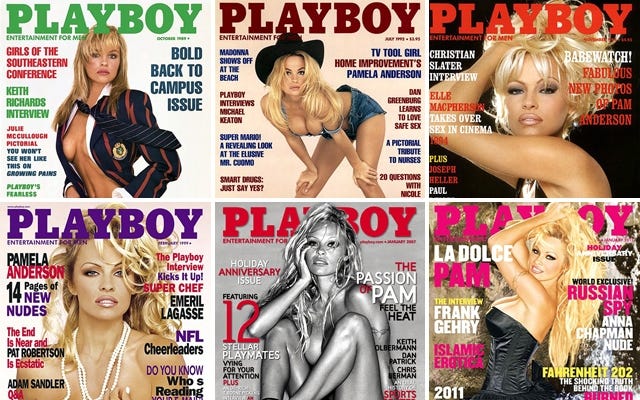 The 49-year-old has had two sex tapes leaked—one with Tommy Lee in 1995 (her husband at the time) and another one with Bret Michaels in which images of the video appeared in Penthouse magazine in 1998. Anderson has also appeared on more Playboycovers (15) than any other model, and was the last model to pose nude for the magazine in its the January/February 2016 issue.

What the fuck Pam? How are you going to do this to us? This is no different than a drug dealer telling one of his customers that drugs are bad. Shit, it’s the actual drug telling a dopehead to put down the pipe and get some help. That red one-piece Baywatch bikini, countless Playboy spreads, and those sex tapes were the gateway drugs to this world of porn for MILLIONS of idiots like me. Actually for some reason seeing Pam Anderson actually having sex really didn’t do much for me. Probably because seeing Tommy Lee’s dick made me feel more inadequate than usual. Anyway, this is pretty fucked up by Pam. If she was still throwing 95 MPH heat on the black like Elizabeth Hurley, no way she says this. Her entire life was paid for by crumpled up tissues and old socks. This is the epitome of biting the the hand that feeds you.

It’s moments like this that we should remember the good times when Pam was saving lives as C.J. Parker.