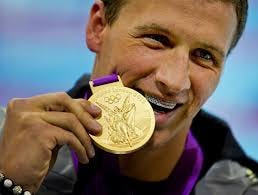 Embattled swimmer Ryan Lochte is joining the next season of ABC’s “Dancing With the Stars,” according to multiple reports.

Sources told ESPN and USA TODAY Sports that producers for the ABC show reached out to the 12-time Olympic medalist before this summer’s Games. There, Lochte came under fire after he was found to have over-exaggerated details about a late-night run-in with armed security guards at a Rio gas station.

Ryan Lochte’s story is baffling. This dude has had a whirlwind couple of weeks. From zany Olympic 6x gold medalist to international incident causing idiot who lost several sponsorships in just a few days. I thought for sure that Lochte would be shamed for months. Nope. His fall only lasted a few days and all it took was a little box of hair dye and a sit down with Matt Lauer.

Lochte dyes his hair back to brown in order to look like a good boy and explains his story from his perspective and seemingly all is well in the Lochte world. Act sorry, look handsome, and remind people that you swim really well and that’s all it really takes to get back in the public’s good graces.

Lochte went from getting his passport suspended and the fear of Brazillian jails to finding out that he’s gonna be grinding with a professional dancer for hours a day for possibly months. Not a bad life if you can get it.

I’m a sucker for a heartwarming story about a stupid person overcoming all odds to succeed so, needless to say, I’ll be on Team Lochte during Dancing With The Stars.