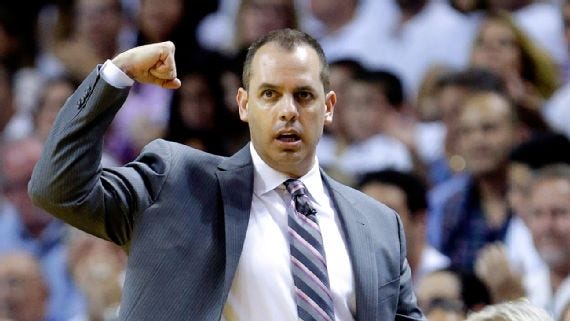 NY Daily News- Phil Jackson met face-to-face with with former Indiana Pacers head coach Frank Vogel last week, the Daily News has learned. The clandestine meeting, which is believed to have taken place in Los Angeles, also included Knicks general manager Steve Mills, according to a team source. Kurt Rambis, David Blatt and Vogel are the top three candidates for one of the more coveted NBA jobs. Jackson’s meeting with Vogel also raises further questions as to whether Garden chairman James Dolan is opposed to signing off on Jackson’s preferred choice, Rambis. 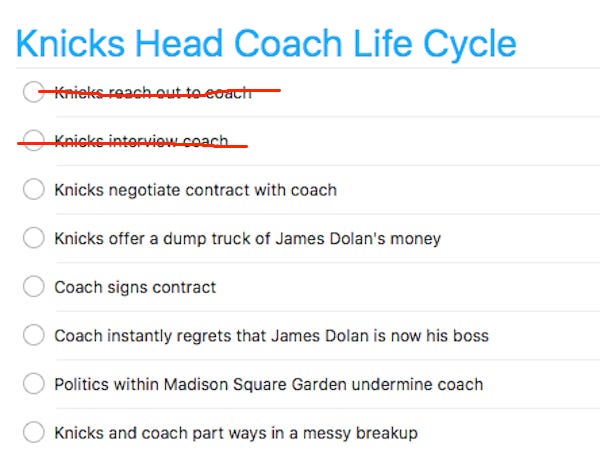 Dare I say this may be the beginning of something beautiful? Sure, watching the Believeland 30 For 30 on Saturday gave me all the flashbacks of being a delusional Knicks fan and thinking everything was going to work out for us. I can still remember hearing and falling for all the rumors about LeBron signing with the Knicks. Mike D’Antoni, Amare, and LeBron seen eating together at a steakhouse. The Decision being in Greenwich so LeBron could head to MSG right afterwards. And lets no forget all those people that bought season tickets thinking that LeBron was going to make the Knicks championship contenders. All those people had to know SOMETHING was up before spending all that money, right? Nope, just another spectacular flop in Knicks history.

Now of course Vogel isn’t anywhere near as big of a prize as LeBron. No coach is. But the mere thought that the Knicks front office may make the best move possible (hiring Vogel) instead of the very very very worst move possible (hiring Kurt Rambis) is giving Knicks fans butterflies in there stomach. I am going to choose to believe that Vogel is the main target to run the team and the defense, while Vogel and the other poisoned branches of Phil’s coaching tree handle the finer points of the antiquated triangle offense. Because the only thing more tone deaf than hiring Kurt Rambis without giving any other coaches an interview would be to give interviews to good candidates and still go with Rambis. And no organization would be that tone deaf, right?