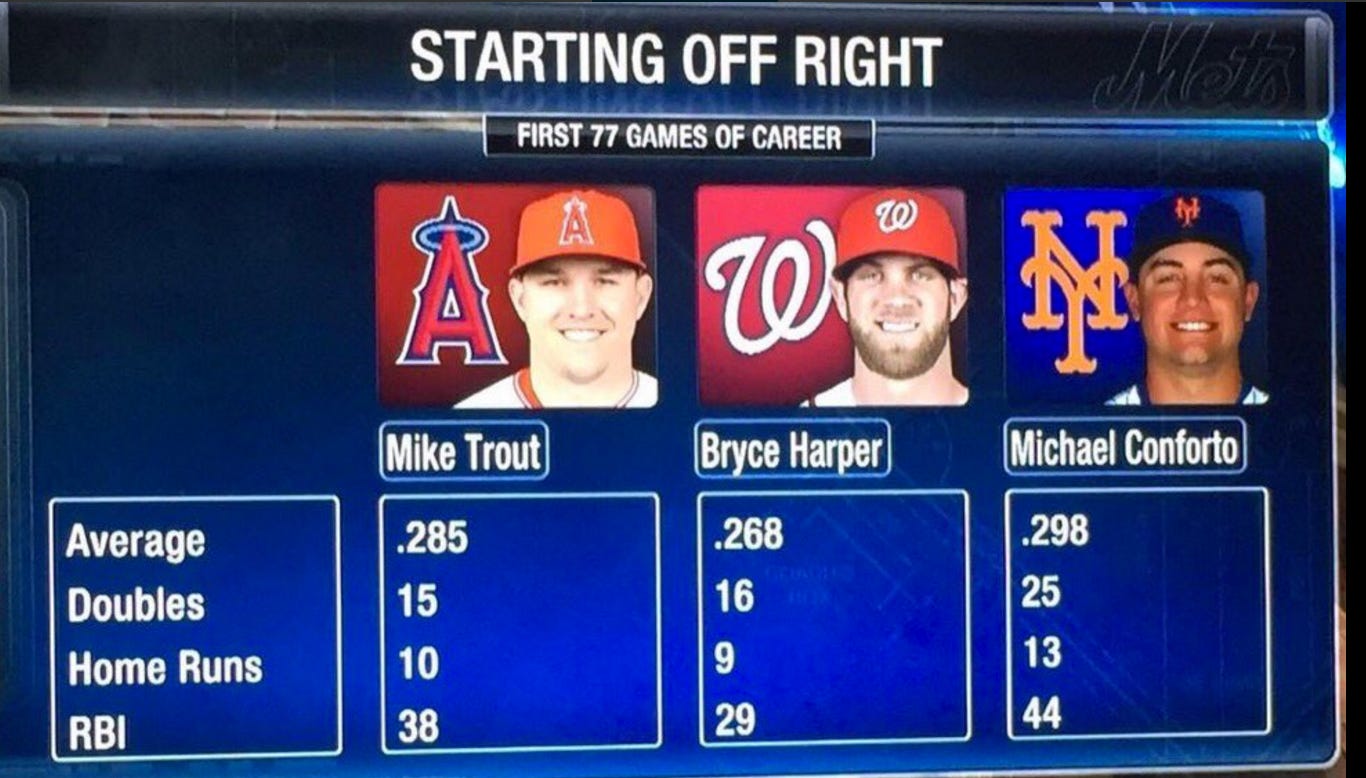 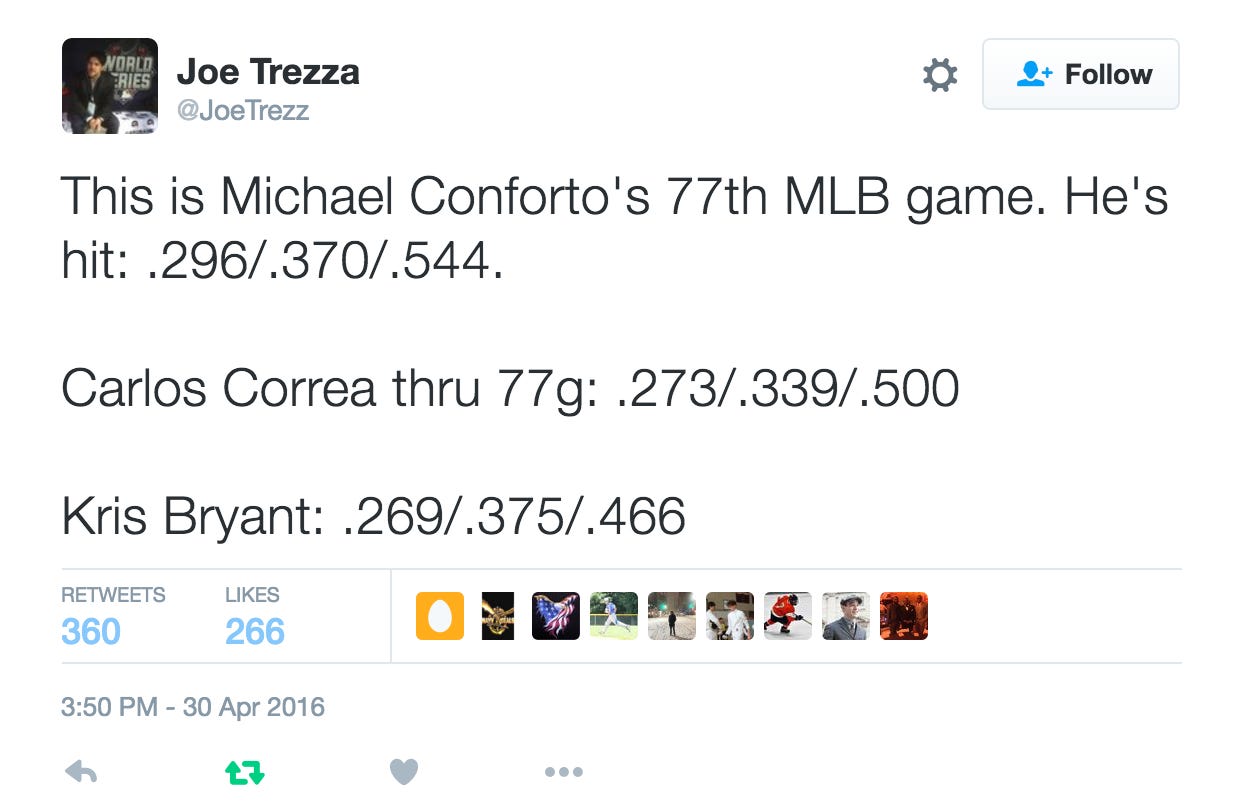 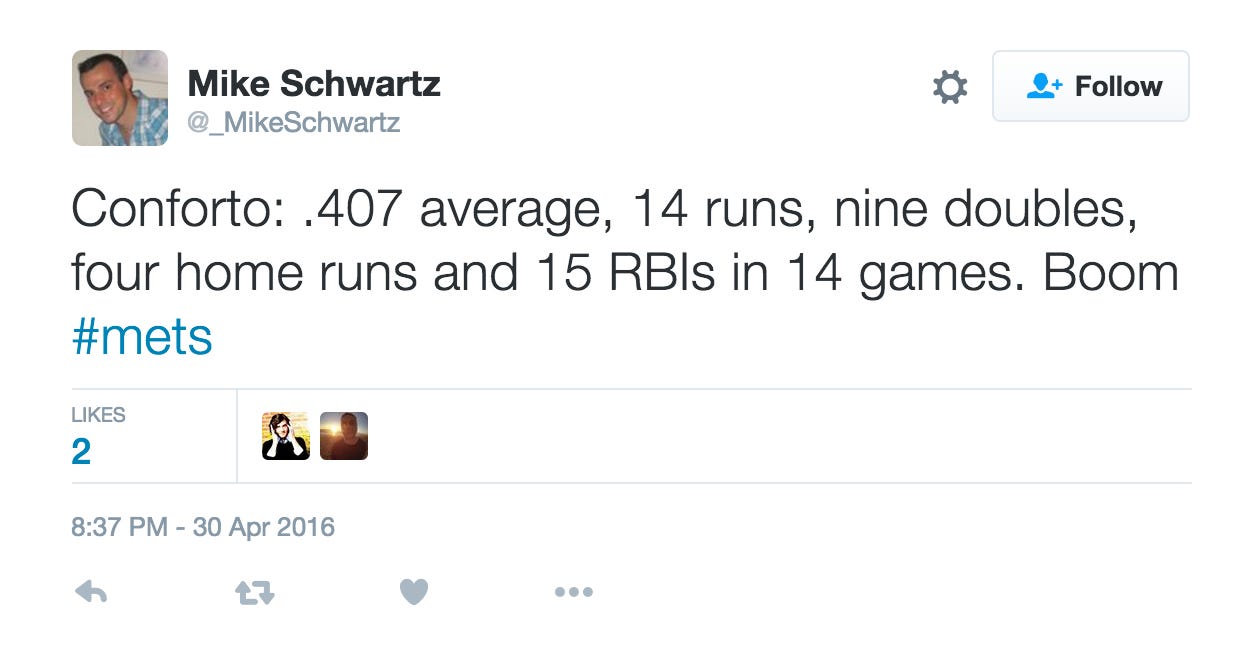 Michael Conforto has arrived. In a major way. To be honest when he bashed 2 World Series home runs at the age of 22 we knew he was going to be special. But now hes officially here. The three hitter on one of the hottest offensive teams in baseball. And he’s MASHING. He’s going to be around for a long, long time. And hes the offensive compliment to all of the young arms that have come up in the system. The farm produced at least one major bat as well.

But all that being said, we need to CHILL with the Bryce Harper/Mike Trout comparisons that were floating around this weekend. I think we all got a little giddy when SNY showed that graphic after Saturday’s game after the team’s 8th win in a row. And I’ll admit I had some thoughts of “Wow. I knew he was good, but not that good.” But thats about it. Nobody with a reasonable brain is thinking that Michael Conforto is going to be Mike Trout or Bryce Harper. Thats not a knock on Mike. Harper and Trout are generational players. Once in a decade type of players and the fact that there’s two is bananas. 3 if you count Stanton. Treating these “through 77 games” stats like they are Gospel or some ironclad indicator of his future is just flat out unfair to Conforto. Not to put a damper on it but both those guys were younger than Conforto for their first 77 games. Trout was like 21. Harper was like 15. What Bryce Harper posted last year for an entire season is better than Conforto’s best 100 plate appearances in his young career. The defense those guys – particularly Trout – play adds another dimension to their game that Conforto cant match. But again, not a knock. Its just not a reasonable or fair comparison.

You can throw out the Correa comparison because what he’s doing all as a shortstop is just something different altogether. But the Kris Bryant comparison is an interesting one. I think Conforto’s reputation hurts him a little when people start predicting his potential. Kris Bryant was the Golden Child in a Cubs system loaded with bats. He was the most highly anticipated and as such I think people are, rightfully so, predicting him to be an absolute monster in this league. Conforto on the other hand, never had that level of anticipation. Always overshadowed by the arms in the system. His name was tossed around with guys like Nimmo and other middle level prospects. I dont think anybody ever expected him to be something truly special. I think his start this season has shown he absolutely has the ability to do just that. We love to compare stats and players and dub players the next this and that. Some of these comparisons are absurd, some are a little more apt.

Hes by no means a perfect hitter. Still struggles mightily with lefty pitching. 0-fer yesterday vs MadBum shows hes got a lot of work to do before being mentioned in the same breath as any of the aforementioned players. But whats most impressive about Conforto is the adjustments he’s already show. Not even a full season in and he’s staying ahead of pitchers. Already adjusted to the shift and going the other way. Already adjusted on last year’s problematic pitches. No reason to doubt his ability to adapt to left handed pitching. Plus for every weakness there’s a counteracting strength. He ranks number 1 in the nouveau “hard hit rate.” Dude mashes the ball 100 mph off his bat every time. This season he’s already shown an increase in his line drive hitting. There are some tangible things in his game that back up what we seem to casually be seeing as fans at home. Some stats are more telling than others. Theres some small sample sizes, some hot and cold streaks, some strengths and some weaknesses. But the bottom is Mike Conforto can rake. For the sake of the kid’s psyche, keep your expectations at least somewhat tempered. But enjoy it. Hes very very good.