Daily News – Richard Simmons has vanished from public view, and many who know him best say they haven’t had any contact in more than two years. All repeat the same message, some anonymously and some on the record: Simmons stopped returning calls and emails more than two years ago, behavior that is highly out of character, and his housekeeper is blocking access to him at home. Indeed, for a generous and intensely social public figure, one who taught classes at his Beverly Hills gym until a few years ago; has sold more than 20 million exercise videos, including the mega-popular “Sweatin’ to the Oldies” series; appeared many times on David Letterman’s shows, “General Hospital,” his own talk show and infomercials; and was a seemingly ubiquitous presence for decades, the silence is striking.

“We were very close,” says a friend in Hollywood who spoke on the condition that his name be withheld, and who has not heard back from Simmons since 2013 — one of five people who described to me the same situation. “It’s not something that I want to seek publicity about, but we are very concerned. Teresa did turn me away several times. He has missed funerals of close friends. He was the most reliable and caring person on the planet, and then to suddenly vanish? I have come to believe that something else is happening. I don’t think Richard is in there of his own volition.”

He also believes that Simmons is deeply depressed, because of a chronic knee injury that has kept him from teaching classes; the death of his beloved 17-year-old dalmatian, Hattie; and exhaustion from a lifetime as one of the highest-octane characters in American pop culture. How does he think Simmons has spent his days since cutting off contact with the world? “Medicated and in bed,” Oliveira says.

Wow. Just wow. What a saga. Who is this housekeeper? How could she hold him hostage? Does she have mind control powers? Because it seems a little weird that we’re all basically saying “He’s either just quiet and reclusive, or…OR…he’s a prisoner in his own home.” That seems like a pretty ridiculous jump to make. Reminds me of Lord of the Rings when Saruman had that one king under his spell

So does this chick have magical powers or something?? Well, apparently she does!

“I think tormented is the best word to describe his mental state,” Oliveira says. “I think it was (caused by) black magic, witchcraft. That’s not close to your culture, but to my culture in Brazil, and to Mexicans” — Teresa Reveles is from Mexico — “that is a real thing. They invoke the spirits. They light black candles, and red and blue candles. I’ve never participated. I only saw from a distance. But at services, they do special meals. They offer meals to the bad spirits, and light candles, invoking with words.”

Mexican Black Magic! Richard Simmons is a victim of Hispanic Voodoo. Remarkable. Sounds ridiculous. But I dont know. It does say that she controls his mail. And when you control the mail…

Yet, that phone call to Good Morning America seemed pretty convincing though. “I do what I want to do as I have always done….so people should believe what I have to say…because, like, I’m Richard Simmons!” Thats the Dicky Simmons I know! “I’m Richard Simmons! I’m good enough, I’m smart enough, and gosh darnit, King Kong aint got shit on me!” No Mexican witch has control over a guy like him. If you ask me I think being flamboyantly gay and energetic for like 2 straight decades probably wears on you. After all that I’d probably wanna just sit around in my house forever too. Look at this crib: 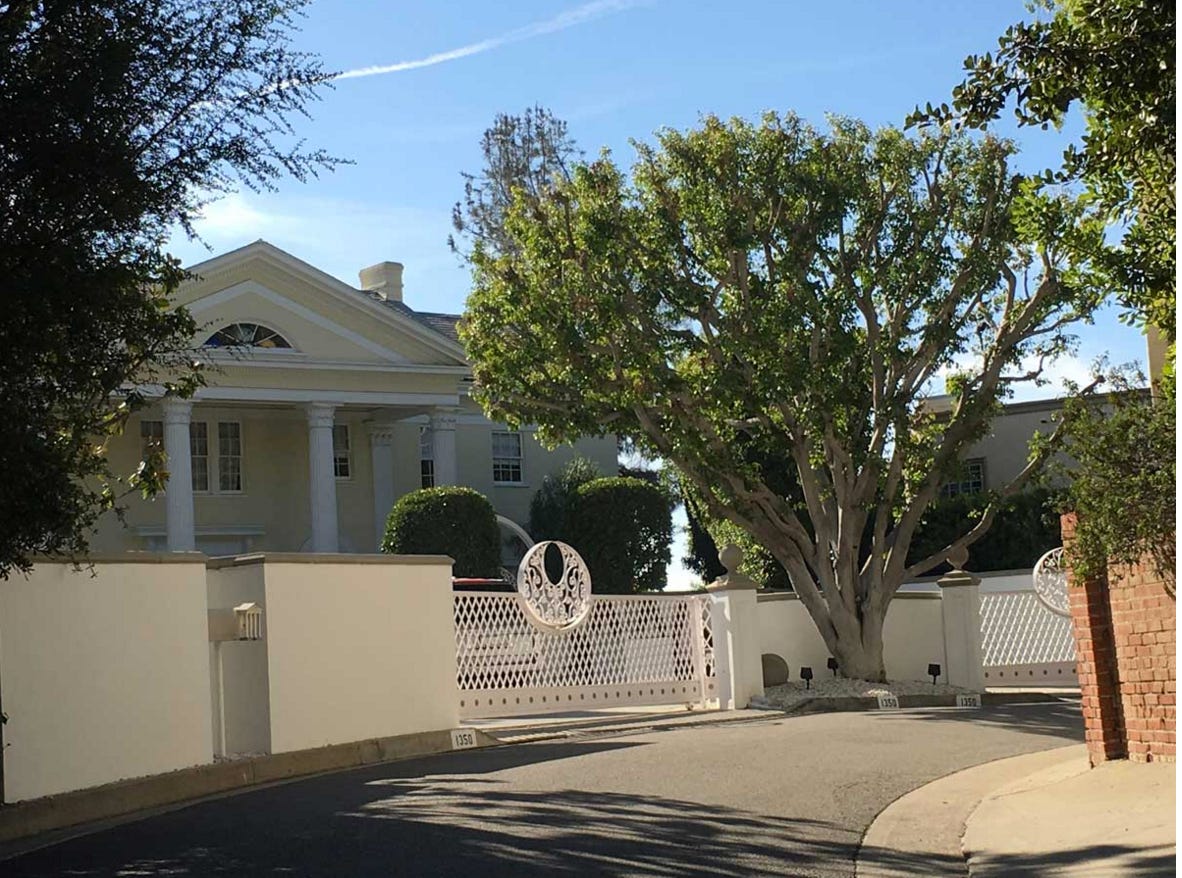 I’d hang out inside that thing forever too. There is absolutely nothing better than just hanging out, alone, unbothered, inside. Fuck all that outdoors nonsense. All of that “be social” garbage. If you gave me a genie with three wishes I’d wish 3 times in a row to just hang out inside an awesome house 24/7. I’d go

Wish 1 – I want an awesome mansion

Wish 2 – I want a housekeeper

Wish 3 – I want the public to think that said housekeeper is holding me hostage so that I never have to feel guilty about sitting around inside my house all day every day because people will feel bad for me and view me as a prisoner.

That would be the best life ever. Not only do I get to chill solo but I also get sympathy. 2 best things in the world right there.

So I dunno. Its seems highly unlikely that a housekeeper can keep someone prisoner in their own home, but I really dont know for sure. If there was one person that could be kidnapped in their own house by their maid, it would probably be Richard Simmons. Also, when I was skimming that Daily News article, I came across this quote from a schoolyard bully when he was growing up:

“Hey, porker,” one schoolyard bully taunted Simmons. “Maybe I can put a hole in your head and some of that fat will come out.”

And I’ll be honest, thats the sort of burn on the black top at recess that sticks with you forever. Thats the sort of one liner that fucks you up mentally for life. I’m gonna poke a hole in your head so the fat pours out. Jesus Christ. Have some fucking mercy. I’m not sure if that drives you to be a recluse or makes you susceptible to being kidnapped by your own housekeeper, but whatever the truth is, the root of it is that bully saying he was going to make fat pour out of your head. Mix that with a dead Dalmatian and thats a recipe for severe reclusive depression.

Or its the Mexican witchcraft. One or the other. Either way, top 5 internet story of all time.