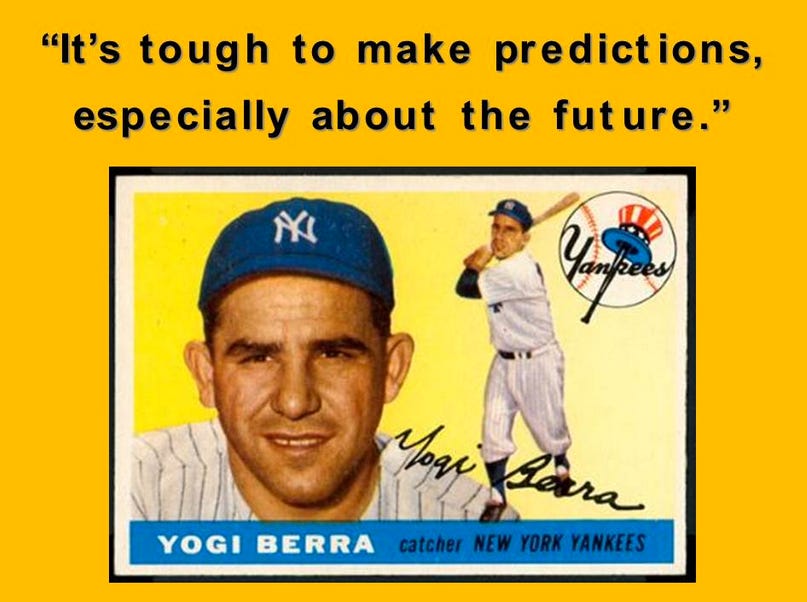 Its incredible to think that a 10 time champion, 3 time World Series MVP, Baseball Hall of Famer and World War 2 veteran could be remembered for anything other than those accolades, but if you ask me, Yogi’s lasting impression on this world will be his Yogisms. His non sensical quotes that often seemed to make perfect sense. Its like every time he opened his mouth, it was like Dr. Seuss was playing catcher for the Yankees. Truth be told, a lot of Yogi Quotes have been debunked. He either never said them at at all or can be attributed to someone else. But that only makes it more hilarious. Yogi had said so many dopey-yet-brilliant things that any time you hear something that puts your mind in a pretzel, they just attribute it to him. And in some weird way, that whole idea is a Yogism itself:

The best Yogi Berra quotes are the ones he never said

So I figured to honor the late great philosopher we’d play a little game of Real Or Fake. Answer key at the bottom – the best real and fake Yogisms ever spoken:

3) You can observe a lot by just watching.

5) The best way to win is to not lose

9) No one goes there nowadays, it’s too crowded.

10) You can’t get to first if you don’t go through second.

11) Baseball is ninety percent mental and the other half is physical.

12) A nickel ain’t worth a dime anymore.

14) Always go to other people’s funerals, otherwise they won’t come to yours.

15) We made too many wrong mistakes.

16) Why do they call it home plate? I never seen a plate shaped like that.

18) Congratulations. I knew the record would stand until it was broken.

19) Baseball is an easy game until you gotta do the hard stuff.