On our 08:00 am Sanctuary Cruises whale tour, just outside the harbor in Moss Landing, two kayakers on a tandam kayak were almost crushed to death by a massive, near full-size humpback whale. We stopped to see a large aggregation of humpbacks feeding and carrying on with random acts of hijinks. There were also a lot of kayakers right in the middle of it all. Humpbacks were coming up next to and in the middle of many kayakers. It was amusing. It’s all fun and games until someone gets jumped on. The next thing we knew, this thing launched right on top of these two kayakers. That was heavy. The video was shot by Sanctuary Cruises passenger Larry Plants. 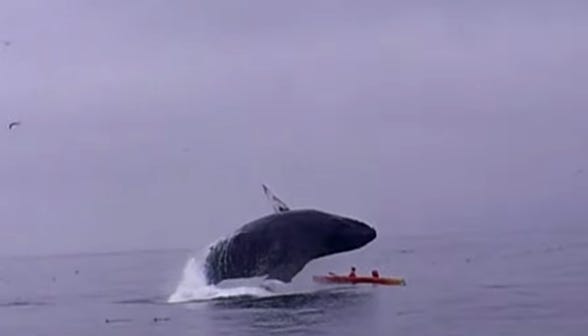 Andddd goodnight. We are so close to this happening, it’s not if, but when.

Just last week this woman was surrounded by 30 whales.

In July this kayaker was a gust of wind away from a whale slapping him into next week.

Last November these hooligans were cracking up as 6 whales almost ate them for breakfast.

We keep getting these amazing yet terrifying videos, and I thought today was the day we saw kayakers crushed to pieces. It does not get much closer than that. The people filming it were half scared, half amazed by what they just saw. It’s almost as if the whale spotted them and barrel rolled out the way at the last second. If so, props to him. Maybe we can be friends with aquatic life after all. But fuck was that close. How much shit do you think they have in their pants right here? All of the shit? 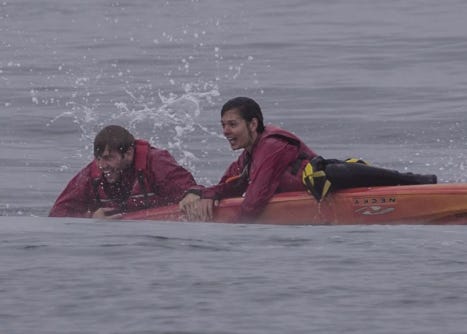 PS: I love that at the beginning and end of the video the company that runs these ocean cruises made sure to put their information. “Come watch whales kill people on a quiet Saturday morning at sea!”