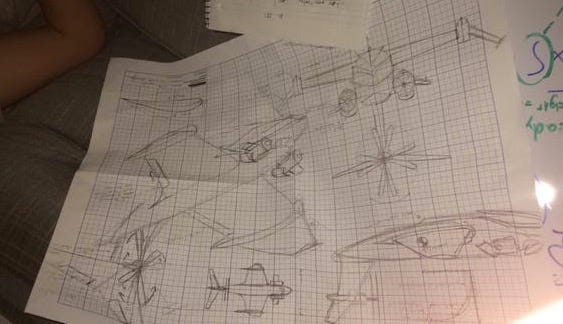 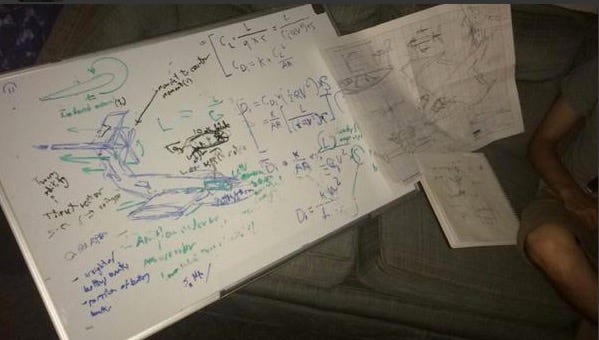 Guardian – Enter Keith Fraley, a 19-year-old second year student of software engineering at Michigan Tech college, and his tweet about his roommate, Mark, a mechanical engineering student, who arrived home wasted and managed to design an entire plane – and woke up with no memory the next day.

What time did Mark come home, and what had he been drinking? Did he just bowl straight into the aircraft designing, or was there some lead up to this?

It all started around 11.30pm. Mark burst into the room in a drunken sway, asking where his textbooks were and after greeting me he rushed back out of the room. From what the person who brought him up [to the shared accommodation] was saying, Mark had a ton of rum and vodka-mixed drinks.

He then came stumbling back two minutes later to grab his giant whiteboard. I just laughed as I sat on the computer listening to his murmurs. Around 1.30am, he came back and he sat on the couch with a worn look on his face.

My friend Cody and I both looked at Mark as he then began to spew information about his whiteboard designed craft and the calculations behind it. Cody and I were in tears from laughter because the aerospace mathematics he tried telling us about sounded like a slurred robot. I did no encouraging towards the creation of this, but I did encourage him to continue talking because it was hilarious.

So, would the aircraft fly? Does the design hold up in a sober setting?

Well technically, it’s not an airplane like I claimed. It’s actually called an ekranoplan, which is more like a very high speed aircraft that floats above the water (Mark is trying to dumb this down for me). Mark says that he imagines his design may work, and he looks forward to trying to recreate his work into a remote-control model with his colleagues …

“College Kid Goes To Bar On Friday Night And Gets Blackout Drunk,” whoaaa what a story. Alert the presses, we’ve got a national news story on his hands. Let me guess, he ordered a shitload of Dominos? Projectile vomited all over his bathroom floor? Texted an ex about missing her and wanting to get back together? Did one of the dozen things that 99.9% of college bros do every single Friday night of the year?

…Oh, he designed a next-level high speed aircraft that floats above water called an ekranoplan that he will soon have recreated and tested by professional engineers. Casually drew up a ground effect vehicle that attains level flight near the surface of the Earth making use of the aerodynamic interaction between the wings and the surface. Okay.

Can’t even hate on this or call this kid a nerd or anything. We wake up from our blackouts even more worthless than before desperately trying to delete our texts and avert our eyes from our credit card bills, Mark wakes up with theoretical science worth probably millions of dollars on the whiteboard next to his face.

Probably even took his shoes off and got under the covers and plugged his phone in too, this motherfucker.