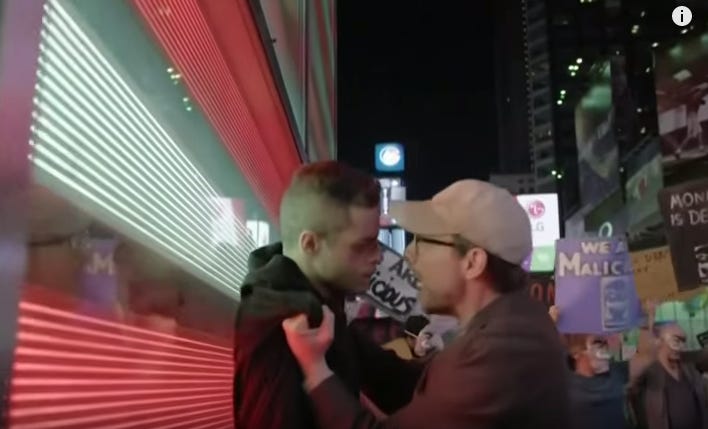 Well that was something.Last nights episode was like a microcosm for the whole season. A lot of chaos, a lot of confusion, a lot of questions, and we’re left unsure whats real and whats not. In kind of a weird twist, after 9 episodes of Elliot and fsociety slowly building up to executing their plan, the finale just breezes right past that. We begin 3 days after their hack has succeeded – all debt has been erased, cash rules, and fsociety appears to be a full blown revolution instead of just a handful of anarchist hackers in an arcade. Elliot wakes up in Tyrell’s car after three days, unaware of what has happened.

And so began the “Is Elliot actually Tyrell?” predictions. In a lot of senses, the shoe seems to fit. To begin, waking up in his car with no trace of him and no knowledge of whats happened feels like he’s just had his Tyrell personality “on” the past 72 hours. Now emerging from the car as Elliot, unaware whats been happening in his life as “Elliot.” Then there was the conversation he had with Tyrell’s wife, which was very bizarre. Talking outside the apartment didnt just feel like a conversation with a stranger. It almost felt as if she was talking to him and one of his multiple personalities. When she spoke in Danish she said “If something has happened to him, I will kill you.” Which A) Is scary because that psycho bitch MEANS it. and B) Again kind of sounded like she was threatening one of the personalities inside this crazy person. And then there was the “God” references where Christian Slater referred to Elliot as his God and Tyrell a few episodes said he had seen God as well. Maybe some religion bullshit mixed up in there? The three of them are all one? Trinity style? But ultimately, I dont think its even remotely possible this theory holds up. First and foremost when Elliot went to the E Corp offices looking for Tyrell, his assistant would have noticed him as Tyrell if they were the same person. And secondly, Tyrell had a family, a job, Elliot has an apartment, and friends, how could they be in two places once? His wife was probably just saying “My husband is missing and youre a mysterious weirdo who showed up at my apartment, if you did anything to him I’ll kill you.” If you go back and take a look at the rest of the season, I dont think this idea holds up. It seems bizarre that Tyrell would just disappear but thats a question left burning for season 2.

And speaking of burning questions, I hope you listened to my blog yesterday and watched until after the final credits. Because our girl/guy White Rose reappears. This time playing a male, hanging out at the Spooky Evil Mansion rubbing elbows with the Evil Corp CEO. Has White Rose been in on this the whole time? Was this all an inside job by Evil Corp? Was the CEO aware of everything happening, on to Elliot and fsociety the whole time? It sure felt that way to me. He said “of course” they know who was behind it and that person would be handled. Its not quite the feeling that he secretly wanted the crash to happen, but more just like he didnt care. Its why he was so calm cool and collected the whole episode. And why he coldly says he was happy that dude killed himself. He ultimately knows that hes rich beyond all repercussions. Doesnt really care about anyone or anything. Even a setback like this cant ultimately stop E Corp or big corporations. At least thats the vibe I got. They’re sipping champagne by a roaring fire, frustrated, but ultimately not concerned. It feels like fsociety has won the battle, but not the war.

It kinda feels like White Rose is playing both sides, right? Like if it was fully an inside job and they knew about it and encouraged fsociety, the CEO Philip wouldnt have shown any concern or frustration. He would have been toasting to White Rose like “Our plan worked.” It seems like his reaction is definitely some level of defeat. I dunno I just get the vibe that this is all a game to these big wigs who are the 1% of the 1%. Fsociety and the general public thinks this is the end all be all when for E corp it just appears to be a blip on the radar. Just a bad day at work for everyone at E Corp.

And speaking of a bad day at work, your girl Angela had a rough one, ending up with her high heels covered in blood after that E Corp exec offed himself on live TV (By the way, I knew going into the show that it was a suicide on live TV that forced the show to be postponed in the wake of the Virginia shootings. After having seen the scene, I dont think it was that bad. I think they could have aired it. But better to “air” on the side of caution.) I thought the scene with her shopping for new shoes felt forced. Like all the sudden in a matter of a week Angela has gone from this pure heart, striving for justice and trying to do the right thing the right way, and now she wants to try on the new Prada shoes and she’s being wooed by the head of E Corp. Just seemed like she was corrupted way too fast.

Overall, I thought the finale was fine. Almost a little too confusing for me to call it great. We kind of reached a point where a lot of the whats real/whats not has spiraled a bit out of control. Its like every scene could possibly be fake. Was that whole Times Square revolution in matching masks real? Seems unlikely everyone would be in masks together like that, and it all disappeared when Elliot had his episode, but also seems dumb that it would be in Elliot’s head? The Tyrell/Elliot stuff seems very suspicious and there are weird things pointing towards some sort of twist between the two of them, but theres too much that has gone between them prior to this episode for any of that to be true. But maybe thats the point. Maybe there’s some symbolism in that. Like Christian Slater’s Times Square rant. The world has become completely artificial. Completely fake. So we, as viewers, watching this show cant tell whats real and whats fake either? Just a thought. Some meta shit right there. Maybe we’re not supposed to be able to tell who’s who and what’s what because thats kinda how real life is right now. Nothing is as it seems.

A lot of questions for season 2. Who’s behind the door? Is it Tyrell? And if not, where is he? Whats White Rose’s involvement? Whats E Corp going to do to Elliot, if they truly know he’s responsible? How does society recover from a financial revolution like this? So much confusion. Such a mind fuck. My mind has been fucked by this show. Rough, I’m never gonna see you again sex with my brain. And the sick part is my brain is kinky enough that it loves it.

PS – Annoyed that the gun in the popcorn didnt go off, but they offset it by having that “End of the World Party” in the arcade to bring so many fingerprints and so much DNA into the place that they could never be caught, that it made up for it. Another clever little Breaking Bad type of scheme. Brains over brawn.