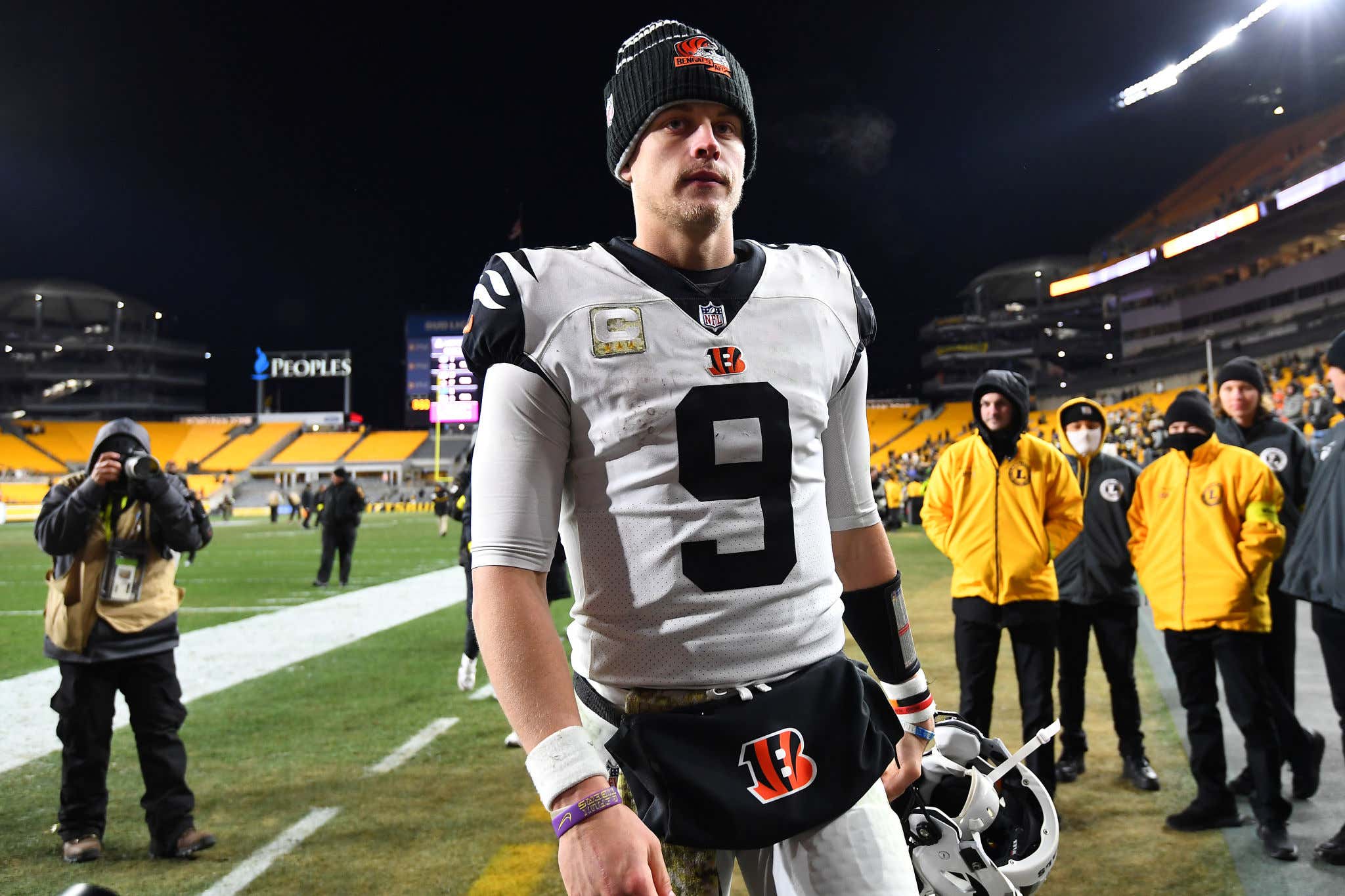 Things were looking pretty ugly through two games for the Bengals this year. A fluky loss to Pittsburgh where a long snapper injury essentially cost Cincinnati the game, and a loss at the hands of the Cooper Rush-led Cowboys? Really?

Joe Burrow never panicked, on-the-fly recovery from a burst appendix and all. He insisted heading into Week 3's matchup against the Jets that everyone just needed to "take a deep breath and relax. We're going to be fine. We're not worried about it."

The results since then: A 27-12 romp over the Jets, six wins in eight games, and Cincinnati's head-to-head "W" over Gang Green gives them the tiebreaker for the final AFC Wild Card spot through Week 11.

I don't know what it is about this guy. Is he the coolest athlete to ever exist? He's getting there. Is he the seemingly most poised, mature, put-together almost-26-year-old public figure I've ever seen? Quite possibly.

How about another question: Is he an elite NFL quarterback? I think it's undeniable at this point. I'm talking at least top-five, perhaps even top-two behind only Patrick Mahomes. In case you were led to believe Joey B. was carried by his excellent receiving corps to the Super Bowl last season, or some other such inane argument, I'm here to tell you this might be the best young leader of men in a locker room in the entire league.

With Ja'Marr Chase out and Joe Mixon knocked out of Sunday's 37-30 win in Pittsburgh due to a concussion, Burrow didn't skip a beat. He didn't let two wild-ass interceptions that in all honesty weren't his fault faze him. To put up 37 points on the road against the vaunted Steelers defense with TJ Watt in the lineup is an achievement any way you slice it.

Mind you, counting the two picks that hurt his completion percentage, this was also a day in which Burrow connected on only two of seven targets with Tyler Boyd. That 28.6% catch rate was the lowest of Boyd's career when getting at least five targets. Translation: Never gonna happen again.

Even coming off that less than stellar showing, Boyd still had a clutch 27-yard reception and spoke afterwards about the confidence Burrow inspires in his teammates. It perfectly aligns with what the Bengals' franchise quarterback said after dropping the first two games of the 2022 campaign:

You might be thinking, "Bro, this is a bold take to have. Implying the Bengals are back after beating two last-place teams the past two weeks. Look at the rest of their schedule! You might not even make the playoffs!!"

I can acknowledge that, but it was also bold of Joe Burrow to face the music after such an ugly stretch to open the year and be some combination of defiant and offended by the notion that his teammates and the still-jelling offensive line weren't going to figure shit out. It appeared, too, that in the early going Joe Brr wasn't himself. Didn't seem to have the same velocity on his throws and was pressing a bit. Whatever "team of destiny" vibes the 2021 club was giving off, the two demoralizing defeats brought about the polar opposite dynamic

At the time I wrote about the state of affairs and was really weighing walking back my adamant preseason assertion that there would be no Super Bowl hangover: "My anti-regression take is looking ROUGH right about now. Trust me I'm aware. On a Panic Button scale of 1-10, I'm at about a 6.5."

Now that he's, again, back from that burst appendix, has better protection and is continuing to evolve by taking what the defense gives him, Burrow is looking SCARY good.

I'm admittedly a little anxious about the closing stretch: @ Titans, vs. Chiefs, vs. Browns, @ Bucs, @ Patriots, vs Bills and finishing with Baltimore at home. However, Ja'Marr Chase will be back for perhaps all of those with the exception of Tennessee, and to Burrow and coach Zac Taylor and the staff's credit, the offense has expanded in Ja'Marr's absence in an unexpected, massive way.

We can all learn a lesson from Joe Burrow's pre-Week 3 reassurances. It pays to keep your composure amid chaos and adversity and not change who you are under the circumstances. Then of course, you have to walk the walk if you talk the talk. The NFL is such a unique, big stage to be on, and as we see with so many young QBs who fail to live up to the hype, it takes a special player and person to succeed at the highest level of professional football. It means making do with Samaje Perine (three TD catches) and typical practice squadder Trenton Irwin (first career TD) hauling in all your scoring tosses against a division rival.

Miss me with all your terrible takes about Joey B. and the Bengals. He and they and Who Dey Nation ain't going anywhere.