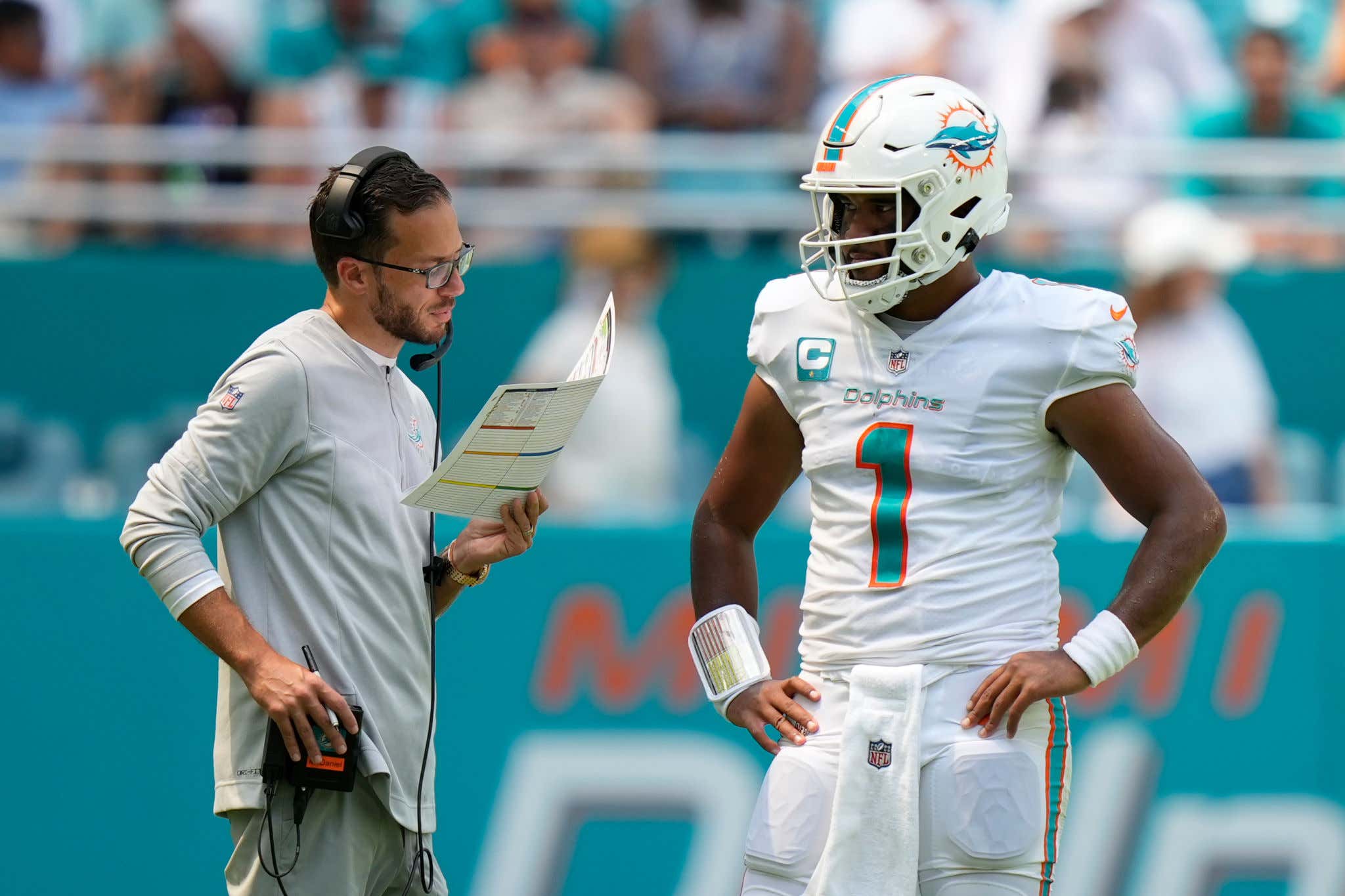 It's gonna be hilarious when I totally jinx the shit out of this, Tua Tagovailoa collapses in the second half of the season and Mike McDaniel proves he can't, in fact, hang tough in an AFC East division with coaching counterparts like Sean McDermott and Bill Belichick.

Except I don't think that's gonna happen. Because McDaniel is a fucking brainiac schemer, Tua leads the NFL in passer rating and yards per attempt, and the Dolphins literally have not lost a game that Tua has been under center from start to finish.

Like what's the argument against Tua at this point? That he doesn't have the strongest arm in the league? I think we all knew that. Do you realize how shitty the situation was for him entering the pros? He was coming off major hip surgery, was dealing with an offensive coordinator in Chan Gailey who was brought in SPECIFICALLY out of a multi-year retirement to reunite with Ryan Fitzpatrick and build a system around his strengths, not Tua's.

Then, for whatever fucking reason, the Dolphins thought it'd be a great idea to have not one, but two offensive coordinators in 2021. They still had a piss-poor offensive line that Pro Football Focus ranked DFL in pass blocking and second-worst in run blocking. That led to Tua getting hurt, yet when he was in, he still managed a 7-5 record and a passer rating north of 90 with bad skill position talent outside of Jaylen Waddle.

McDaniel is the first coach to embrace Tua, build a system tailored to him, and look how it's turning out! Poetry in motion!

Adding Tyreek Hill was a huge boost, no doubt. However, it seems like folk still want to defecate on Tua for helping Hill and Waddle rank first and fourth in receiving yards respectively through Week 8. Like he somehow doesn't deserve credit for distributing the ball to them, even as defenses are doing ALL THEY CAN to stop the dynamic duo.

Whereas other undersized signal-callers can't see the middle of the field — much was made about Tua's remark earlier this year that he has a hard time seeing over the line at times — look at how this man is carving it up in that particular area:

Ready for the plot twist? Guess where PFF ranks Miami's o-line in pass protection this year? Um…31st out of 32 teams.

OH YEAH! And Tua isn't dinking and dunking and relying on YAC nearly as much as you'd expect.

So…Tua's protection isn't any better overall. The Dolphins are getting decimated up front by injuries. No matter. He's still slinging it all over the yard, ranking top-five in average air yards per attempt — ALL THE WHILE "complemented" by a rushing attack that ranks in the bottom five with a paltry 88.1 yards per game.

Need a big completion on the money down? Third down? When it's often a loooooong conversion to make because the Fins can't run? Tua is getting that done at a (an?) historic rate:

The fact that Miami is so one-dimensional, can't block particularly well for Tua, and STILL rank third in yards per play behind only Kansas City and Buffalo and throw it downfield as much as they do should tell you all you need to know.

Oh well. I'm sure Tua will keep taking shots from everyone and be doubted as the long-term QB for the Dolphins. Knock yourselves out, y'all. Just a weird hill to die on when a young, ascending player is balling out to such an undeniable degree.