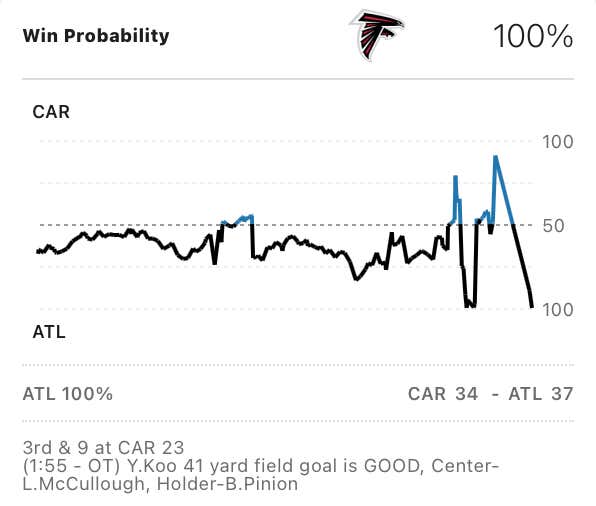 The Atlanta Falcons scored a go-ahead touchdown with 2:14 left in the fourth quarter to take a 31-28 lead. In the time remaining, Atlanta got a stop and then kicked a field goal to take a six-point lead, gave up a Hail Mary for what should have been the game-winning score for the Panthers, who then received a 15-yard penalty when D.J. Moore took his helmet off celebrating, which led to a missed extra point to send the game to overtime, in which Marcus Mariota threw a pick that was returned to the Atlanta 20-yard line where the Panthers then missed another potential game-winning kick before the Falcons drove back down the field and finally ended the game with a field goal.

It's truly remarkable that the Falcons were about to pull off their biggest regular season choke job of all-time — they had a 99.7 percent chance to win the game before Carolina's Hail Mary — and the Panthers somehow found a way to out-Falcon them. There's a glitch in the matrix somewhere.

That P.J. Walker to D.J. Moore pass should be in the annals of Falcons Bullshit, but it will instead be lost to history now. It was literally the longest pass (in the air) we've kept track of and should have won the game because the Falcons had no clue what they were doing. It was the most Atlanta play of all-time.

But they don't ask how, they ask how many. And your FIRST PLACE Atlanta Falcons are all alone at the top of the NFC South standings.

You come at the kings, you best not miss. 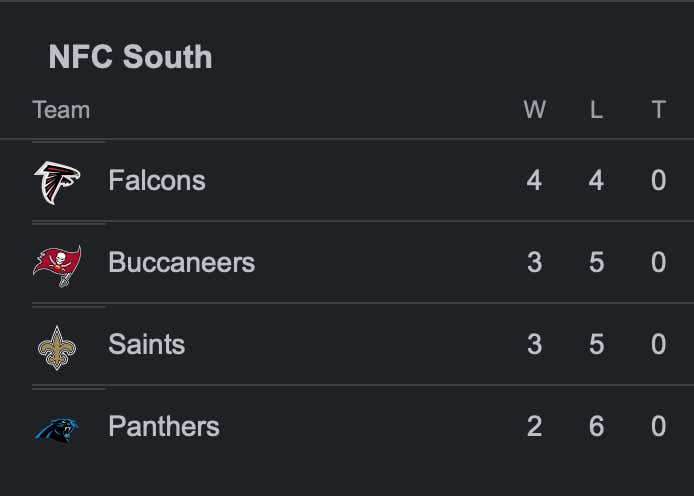