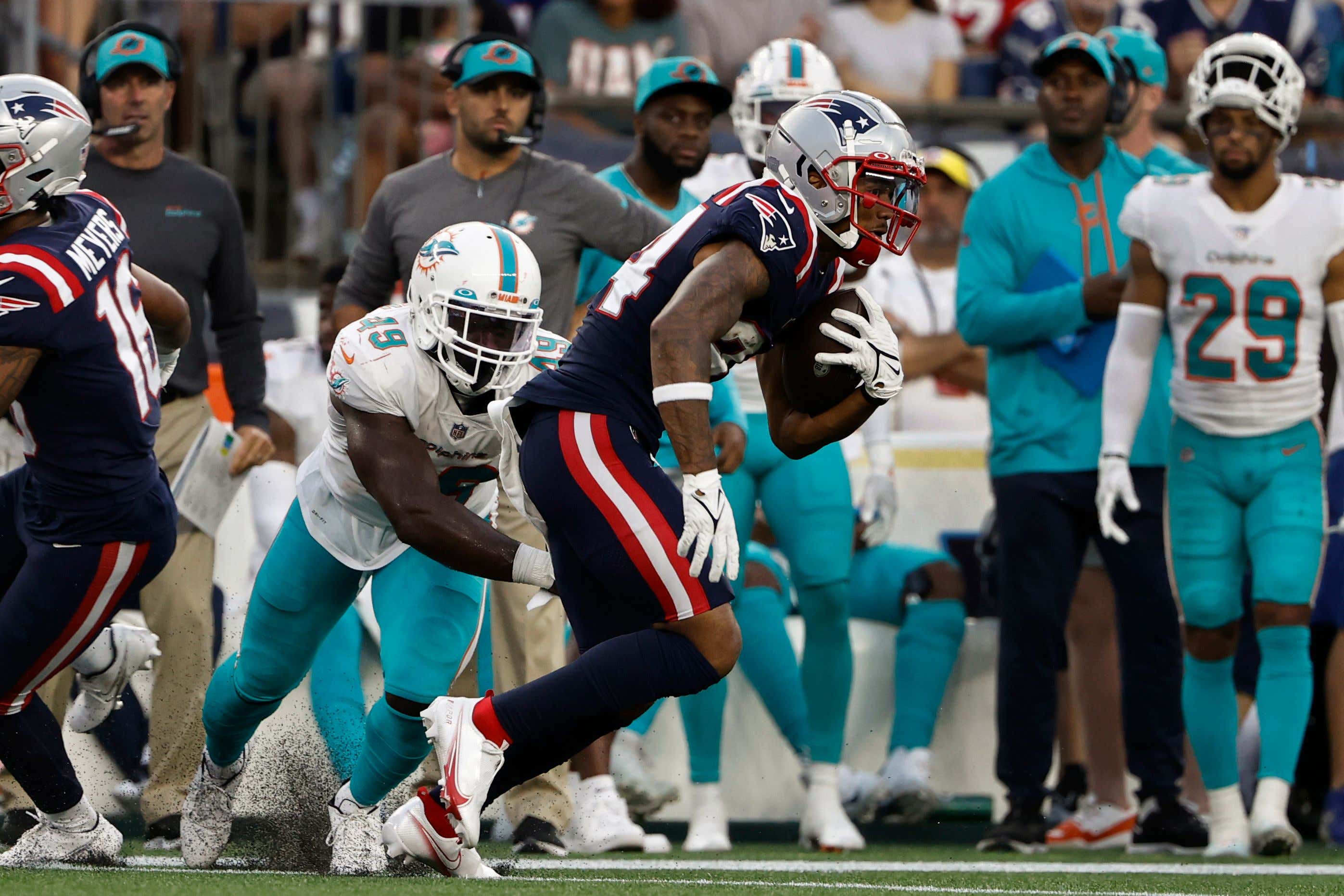 Only when it comes to the Patriots can you write 2,800 words (Note: I've got to start being more concise before I end up getting committed) in a Knee Jerk Reactions and still have to drill down a few hours later because there's a topic you barely addressed.

As everybody knows by now, Kendrick Bourne played all of two snaps in Miami. Two out of 57. One of them just happened to be the highlight of the day for New England: a 41-yard completion where he blew past single, press man coverage and caught a perfectly placed Mac Jones throw right into his bucket.

While the rest of the offense kept misfiring, creating negative plays and putting themselves in 3rd & longs, Bourne came off the bench cold, after inexplicably sitting for 55 minutes of game time, and delivered. The equivalent of one of your best hitters being sent in to pinch hit in the 9th and going deep. Making you left to wonder why he wasn't in the heart of the order to begin with.

Then you remember this is the Patriots of the 2000s. Your wondering is meaningless. There is no Alex Cora who's going to offer an monologue in the postgame to explain his reasonings, discuss the leftness/rightness of lineup to maximize matchups or give an expansive answer about what the analytics say on the matter. You're going to get vagueness and non-specific positivity. Belichick was asked in the postgame if the lack of Bourne was disciplinary. His answer was a curt, "No." This morning, he expanded a little:

I'll just quibble with the phrase "when we needed him," since it was the 4th quarter while down 13. And given the Pats scored once, I assert that he was "needed" on any of seven previous possessions (I'm not counting the kneel down at the half).

Bourne of course, went full Kendrick Bourne, when asked about it. Because he's always struck me as one of those positive, upbeat, enthusiastic guys you love to work with because he makes the drudgery parts of your job fun. (Or that you might want to smother with a cushion off the break room sofa for being so positive, upbeat and enthusiastic, depending on your own attitude about the job.) And I don't just say this because we've had some third party interaction: 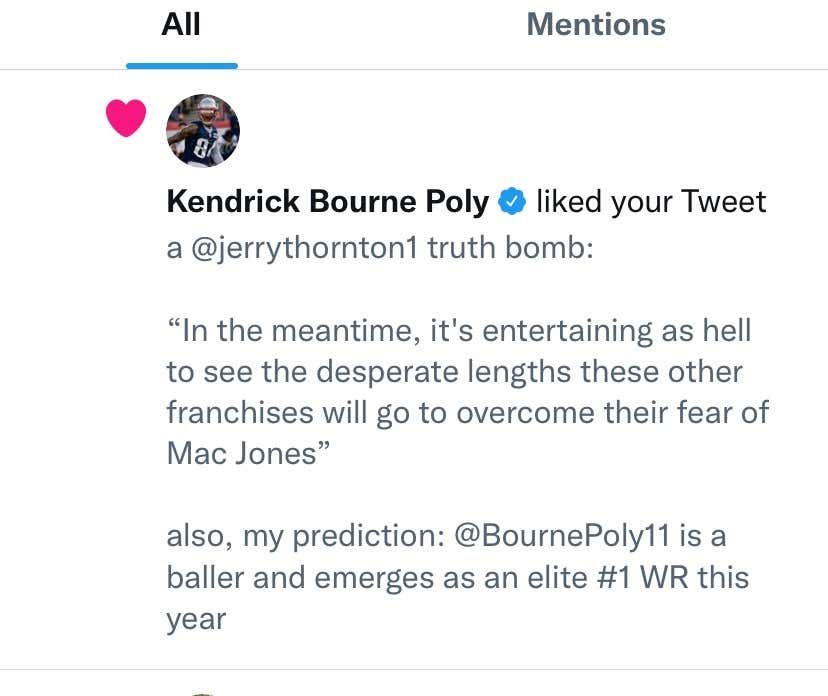 So Bourne doesn't know. You don't know. I don't know. It's another one of those personnel moves where all you can do is be baffled, confused, puzzled, befuddled, perplexed and anything else I can think of without going to the thesaurus I have bookmarked.

And I don't know if this is comforting or not, but Bourne's teammates are in as much of a quandary (still not looking up words; I've had a lot of experience when it comes to being confused by this team) as the rest of us. So reports Phil Perry:

“[He is] somebody who is frustrated, would like to play more. And I can tell you his teammates — there are some that I’ve spoken to that would like to see him play more as well, and they are surprised they are not seeing more of Kendrick Bourne.”

Welcome to the club, fellas. We should get jackets made. Because this makes no sense to me. Not in a performance sense, since like I said this morning, last year he was the most efficient wideout they had. Both in terms of Catch % (82.7%, 2nd best in the league) and passer rating when targeted (140.9, also 2nd best). Not in a strategic sense, because when Miami adjusted to their two-tight end Joker scheme, there was plenty of opportunity to switch things up. Particularly with the down & distance situations I mentioned earlier. And we can rule out discipline, because the coach says so.

So what then? Here's my theory. The reason is this guy:

I'm being 100% serious when I say this. I would love for Belichick or Matt Patricia or anyone else with the team to come out on the record and simply say, "We blew it. Matt's new at this and there was a lot going on and he just flat out forgot to put Bourne in there."

I have a better chance of making it to the Supreme Court, but I'd love to see them just own it. There must be millions of Americans who have coached youth sports who can relate. Granted we're not getting paid millions by multi-billion entities to manage our personnel on game days. But we've all been there where it's getting late in the game and you realize there are kids who haven't gotten in yet. Not because you don't like them or your too busy giving the snaps to the kid with the hot mom who throws parties and has a hot tub on the back patio and might be going through a divorce. Just because you flaked out. You lost count. When that happens, panic sets in. You know you're going to hear about it from the parents who gave up a weekend trip to the Berkshires to be there, and have every right to be pissed little Ethan doesn't even need to throw his uniform in the hamper. So you scramble to get him in there for as many reps as possible or suffer the consequences. It happens to the best of us at one time or another.

A nice, sincere, "Sorry about that, New England. Especially to Mr. & Mrs. Bourne. That's my bad. I'll make sure Kendrick plays most of next week, so feel free to invite the grandparents" would go a long way toward making this go away. But I know better. This will be shrouded in mystery until the solar system is swallowed up by a Black Hole. Or until Belichick wins another Super Bowl. Right now it feels like both are equally likely. But I'm hoping I'm wrong about that.