SI - ESPN NFL reporter Adam Schefter is among the most prolific league insiders working in sports media today. But a professional dancer, he is not. And with his big reveal on Wednesday, it appears his amateur dancing days will be put on hold for a while.

Schefter revealed that he suffered a torn meniscus in his knee, an injury he suspects occurred when he attempted to do the “griddy” dance at Soldier Field two weeks ago. The news was officially broken by Schefter’s ESPN colleague, Marcus Spears.

Before an MRI revealed the torn meniscus, Schefter feared the injury was actually to his ACL. It’s still unclear whether or not he will require surgery to fix the knee, but he said during an appearance on NFL on ESPN that the injury won’t keep him away from work.

For those of you that aren't Vikings fans and don't get to see it every week, this is the "Griddy Dance".

To start, I had no idea Adam Schefter had moves like that. But I should have, because almost every short guy I've ever met can and does dance his ass off. Be it the lower center of gravity, the better coordination, or not being self-conscious, short guys can bust a move.

Secondly, for those in Chicago, and Bears fans who have grown up watching them through the years, this comes as no surprise. Solider Field's actual field is an embarrassment and a death trap.

Soldier Field has been getting killed by the guys who have to play on it, the fans, the media, and critics of all kind for years. It's nothing new.

Obviously the weather in Chicago, and on the lakefront especially, is no peach come Fall and Winter time. So the people maintaining it have the deck stacked against them.

But the Bears and the people in charge of keeping the field in shape (I'll get to them next) have done themselves ZERO favors in addressing the needs and the endless criticisms.

NYT - Soldier Field’s often scuffed, squishy or rock-hard turf  players say it can be all three at once  has been a topic of conversation this week as the Chicago Bears prepare to host the Green Bay Packers on Sunday in the N.F.C. championship game.

Last month, Bears quarterback Jay Cutler called the turf “one of the worst fields in the league.”

Complaints have emanated from Green Bay as well. On Monday, Packers wide receiver Greg Jennings referred to Soldier Field as “probably the worst in the league.” He added that the playing surface would “play a huge, huge role in the game.”

Back in 2011, during a week 3 contest at Soldier, the game had to be stopped with 2:44 left in the second quarter.

the referees called a time out for what was described as a “dangerous situation.”  A close-up of a referee’s foot revealed that he had discovered a small metal spike sticking straight up into the air mere feet from where players were running, diving, and being driven into the ground.

Consistently over the years, and more recently the field has been the focus of visiting teams players who publicly call out the dangerous conditions and risk of injury-

Soldier Field ranked 17th out of the 18 grass fields in the NFL according to an NFLPA field quality poll. However, when asked specifically which grass field is the worst in the league, more players named Soldier Field than any other. The playing surface begins the season in rough shape, uneven in places, visible divots, and a slippery, muddy mess after a small amount of rain. It finishes the season as a complete disaster.

You know that one guy on his block with the boat on cinder blocks, the rusted out kids Big Wheels littered throughout the front lawn, and the grass that gets mowed once a quarter?

Yah, his yard is in better shape than Soldier Field.

If you know anything about how the city of Chicago operates, it's not hard to understand how something as easy as maintaining conditions of 120 yards of natural grass that sees action once a week, 8 weeks a year.

As Nicky Santuro says about Artie Piscano in Casino, "they could fuck up a cup of coffee." 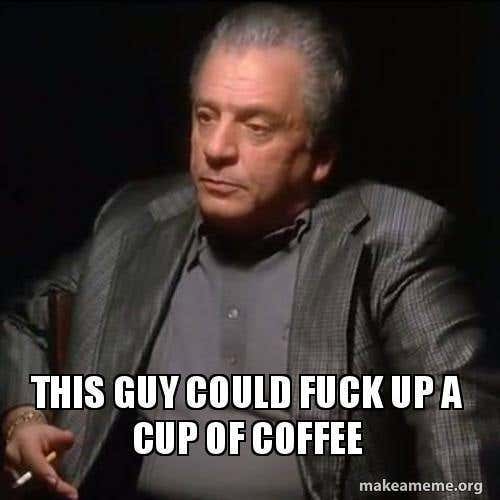 Regardless, thoughts and prayers to Adam Schefter in hopes that he enjoys a speedy recovery.

And let this be a warning to anybody else stepping foot on Soldier Field without cleats, don't make any quick or sudden moves involving twitch muscles or it won't end happy.