CNN- At least eight people are dead and many others injured after a crowd surged forward toward a stage at the Astroworld Festival in Houston on Friday night.

Here's what we know:

“The crowd began to compress towards the front of the stage, and that caused some panic, and it started causing some injuries,” Houston Fire Chief Samuel Peña said during a press conference. “People began to fall out, become unconscious, and it created additional panic.” Peña added that the festival’s on-site medical units were “quickly overwhelmed” following the crowd surge.

According to Houston station ABC13, the crowd began to surge when Drake made a surprise appearance with Travis Scott. One fire department official said the incident “seemed like it happened over the course of just a few minutes.”

“Suddenly we had several people down on the ground, experiencing some type of cardiac arrest or some type of medical episode,” Houston Police Executive Assistant Chief Larry Satterwhite told the AP. “And so we immediately started doing CPR, and moving people right then, and that’s when I went and met with the promoters, and Live Nation, and they agreed to end early in the interest of public safety.”

This is incredibly fucked up and sad.

Poor planning obviously played a huge part in this, but no amount of planning can prevent the worst in humans taking over. And that's exactly what this was.

And then for Travis to look on at the madness and just continue the show?

What the fuck man.

(WARNING THESE IMAGES ARE GRAPHIC)

What makes this all even more fucked up is this is the Cactus Jack x Travis Scott brand.

They purposely create hysteria with everything they do, from sneaker and merch releases to their shows.

This was the promo and choreography for the 2019 Grammy’s performance! Staged actors climbing and jumping barricades

The one thing I haven’t seen any of these big J journalists or news outlets report anywhere is that Travis Scott was straight up BANNED from Lollapalooza and had a warrant out for his arrest after his performance in 2015 for “inciting a riot”.

I was there and watched it get shut down 5 minutes into his set.

Travis Scott was arrested by Chicago police Saturday after the rapper encouraged Lollapalooza attendees to climb over security barricades and storm the stage. The Houston rapper's festival performance lasted just five minutes before being shut down after dozens of fans joined Scott on stage. Scott was arrested soon after and charged with disorderly conduct, Chicago's ABC 7 reports. One fan was also charged in the incident.

In video from Scott's brief appearance, the rapper is seen telling festivalgoers to climb over the barricades to move closer to the stage. "Everyone in a green shirt get the fuck back," Scott says, referring to the security in the pit separating the crowd and the stage. "Middle finger up to security right now." Scott then further incited the Lollapalooza crowd with a chant of "We want rage."

Dozens of fans then hopped onstage with the rapper, but the music was cut off as organizers threatened to end the performance if the stage wasn't cleared. "Listen, they're gonna stop the show if y'all don't get down. I wanna finish performing," Scott told fans. "We can start over, everybody just get down." However, at that point, the concert was shut down and Scott reportedly vacated the scene quickly

Lolla dropped the ban and let him back a few years after, and they’re probably thanking their lucky stars this didn’t happen in 2018 when he returned.

The thought of your kid not coming home alive from a concert should never have to cross your mind as a parent. Fuck festival organizers, and everybody involved in this.

P.s. - this is pretty fucked up marketing. How has this not been taken down?

p.p.s. - an extra big fuck you to this piece of shit dancing on the ambulance in the crowd 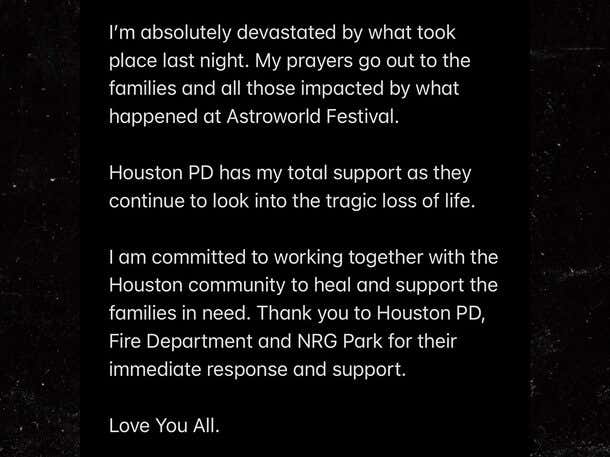