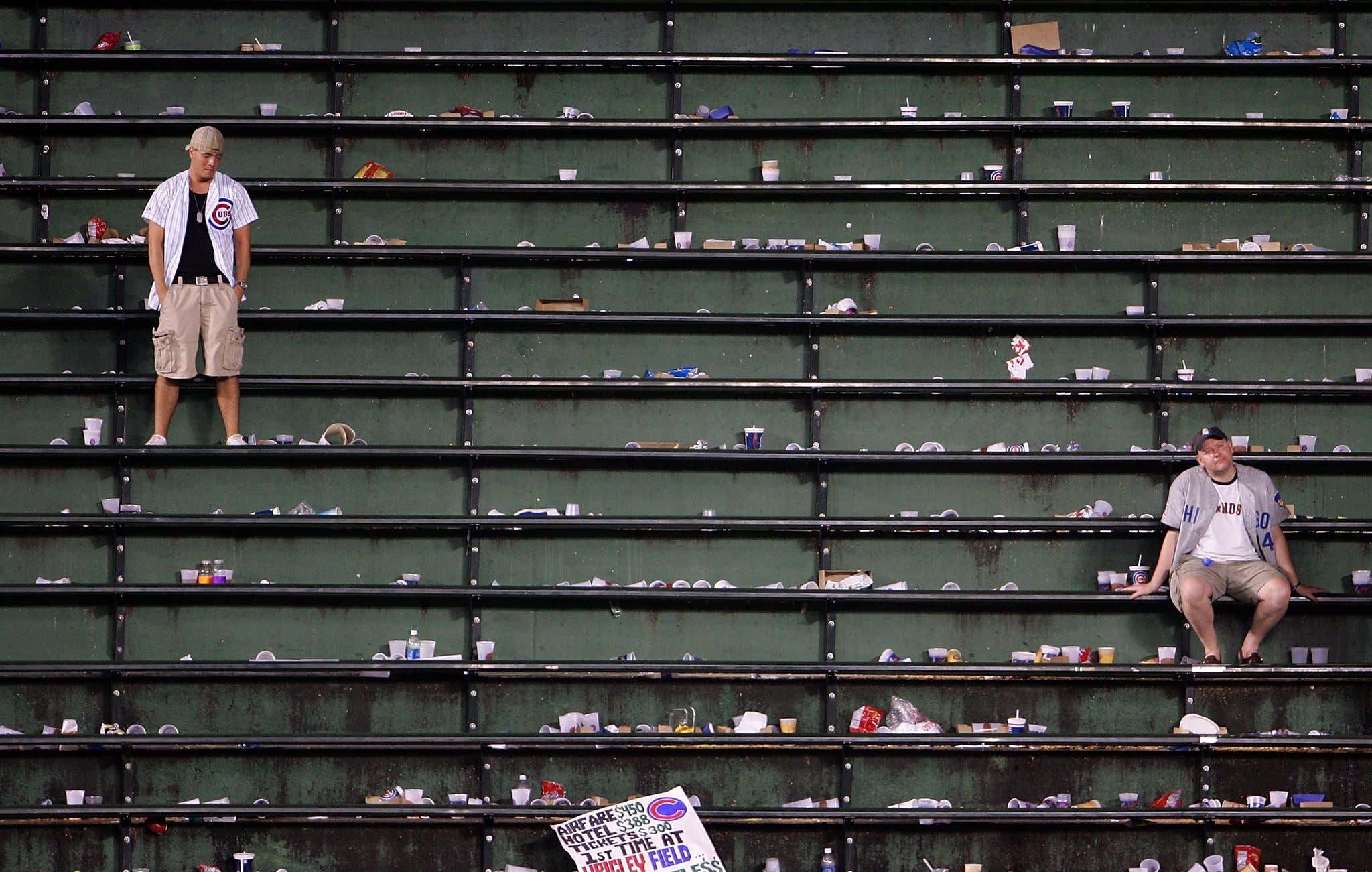 The last week has unquestionably been the worst Chicago sports week of my adult life. And that was coming into the trade deadline with the express realization my guys were on the move. We've been traveling down this path starting with the mass exodus of key personnel last winter that ranged from Theo to Lester to Len Kasper subordinating himself to the White Sox radio booth. The Theo era Cubs were coming to an abrupt end.

But even so there was hope we'd squeeze one more run and make some magic one last time. Certainly crazy to some, but the Cubs rode in 1st place deep into June on the back of an electric bullpen. The starting pitching did just enough. Wrigley was back to full capacity while summer heated up. All signs pointed up as the Cubs travel to New York for a big 4-game set on a 5-game win streak. Life was good.

The Cubs would go on to score just 9 runs while dropping three of four to the Mets. They immediately followed that with 5 runs across an entire home series vs. the Marlins. Over the next week the Cubs would jointly register a 37% strikeout rate (Mark Reynolds had a 31% career k-rate) and a .652 OPS (Eric Sogard career .651) en route to a 2-4 record against the Indians and Dodgers respectively. Back-to-back sweeps against the Brewers and Reds would follow and within just 3 weeks the Cubs dropped 11 games in the NL Central standings.

That's objectively terrible but it actually gets worse if you want to be specific. The Cubs averaged just 2.5 runs/game over that stretch alongside a .187/.272/.331 slash line consisting of 703 plate appearances, a quantity that can otherwise be viewed as a full major league season of PA's for a single player. Taking it one step forward then, let's put some context on those numbers. That slash line would register 135th/135th/134th out of 135 qualified hitters from the last full MLB season in 2019. For 2021, those numbers would rank 136th/134th/134th out of 138.

In other words, the Cubs roster essentially united to perform as the worst hitter in baseball for a 20-game stretch. The worst at getting on base. The worst at hitting for extra bases. Not just one bad hitter, but literally the worst at everything a hitter is asked to do.

Rough estimates from the advanced metrics crowd says the Cubs were 50% worse than an average major leaguer over this time. For reference that would be like Jeff Mathis, Rey Ordonez and Darwin Barney at their absolute very worst taking every single plate appearance for your team for three weeks. Strong defense up the middle but that's just about the most vomit-inducing group of right handed hitters I can think of on the spot. And even so the Cubs were actually worse than those guys for 703 straight plate appearances.

We knew coming into the season that the Cubs would need to have a 1st place lead to Buy vs. Sell at the deadline. There'd have to be objective hope of competing for the pennant, and in that pursuit, the core & front office would level up on their extensions. One hand washes the other. Lineup goes out and does their damage and earns their contracts. The front office has the data and the results to support the investment. Together they give us another couple years of the team that made history. For better or worse we get to drag this fucking thing out a few more times.

We also knew coming into the season that anything less than 1st place would be met with sweeping changes. That's a no brainer when you think of Yu Darvish gone for 4 tribute teenage virgins. Or when you see Schwarber's 149 OPS+ abandoned for $8M and Lester left to sell his Wrigleyville home. If that's the offseason then there's no way mediocre performance could've survived the trade deadline.

And if you're Jed Hoyer - why should it? Theo built the Cubs on the back of young guys. Then he rode them. Then he fired the manager, and now he's out of town. In all work environments of any similarity, the new boss has to make his mark at some point. Before you even consider the dynamics of contract extensions and negotiations, common sense suggests that Jed Hoyer should want to build his own team and I don't think anyone can fault him for that starting position. Pretty clear he was looking at a reset the moment we committed to Zach Davies 32 times in 2021.

Along the way, a lot of people have been calling Tom Ricketts a cheap fuck. He's certainly a lot of things, but cheap isn't one of them. If anything he's completely behind the baseball operations to make their own decisions, provided it's within the business department's budget. But to be fair that's always been a pretty big budget. So to me, the criticisms are more in the fact he didn't put his balls on the table and demand at least Rizzo or Baez to stick around. His job is to override the soulless, heartless, ruthless front office guys that think everything comes down to a number and leverage and all that bullshit. The owner has to be the one who actually knows the fan base. That's where I'm sad about Tom. He could've done something with the process to mitigate some of the heartbreak.

But if you're Tom Ricketts - why would you? You have a process that's won a world series and transformed the Cubs. I don't think now you start walking into GM meetings and start telling these guys how to do a job. Tom Ricketts is the kind of guy who hires people to do shit. He's not telling his chauffeur where to park anymore than he's guiding Jed Hoyer's roster moves. The guy wants to sit back and cut checks.

Not for nothing he's a fantastic owner to get mad at. I can bitch about Tom Ricketts until the literal cows come home and not get sick of it. He probably deserves a fraction of my complaints. I don't give a shit. We all have a role to play and Tom's is to play punching bag to our emotions.

I'm trying to set the stage for when the news officially drops that the boys are gone. You see and smell it coming. Everything is pointing down and there's so much to be mad about. Did this group underachieve? Why didn't we extend them sooner? How come we gave so much money to so many other guys? How long is it going to take to come back? WHAT THE FUCK DO YOU MEAN WE'RE ACTUALLY TRADING ANTHONY RIZZO

I'll be honest that was by far the worst moment of this saga. Rizzo gone. Fuck me sideways. This is a community man. This is a guy who volunteers at hospitals on his off days and buys lunch for the nurses. He runs and organizes amazing events across Chicago. If there was ever a character that you would want to put in one uniform for life, it's Anthony Rizzo. And he's toast.

Contracts? Maybe he's asking for a lot in the offseason. Maybe Jed Hoyer came up with a fair number. Maybe everyone is underestimating one another at the table. All I know is Rizzo will dominate on a big stage like NYY. That's clear as day to anyone who knows this guy. As long as he's healthy…

That's the biggest fear. We can acknowledge it. Rizzo is one of the best at his position when healthy. Same thing with KB. These guys melted in 2018-2020 alongside some of the worst playoff performances you could ask for. The Cubs scored 2 runs in their last 3 playoff games. They finished in 3rd pace in 2019 with everyone younger and playing together. There were so many opportunities to do more and instead we got way less.

But that World Series was great.

Which takes us to the aftermath of these deals. Jed felt they were asking for too much so he moved them for prospects. He knows we can't keep up with the Dodgers and Padres. That's a pretty fair assessment.

Then there's Ricketts. He gives the front office a budget. Jed didn't want to commit as much money in the budget as it would've taken. Ricketts let it happen. He didn't get emotional and neither did Jed. In all respects they were doing their jobs.

And then there's the players. Probably sick out of their fucking minds from getting asked about contracts. Probably exhausted from all the drama and bullshit. These guys probably want to be on the other side of the moon than take another meatball question from someone in front of their Cubs locker. I sincerely feel bad for them because all they want to do is their jobs. They want to play and succeed and be paid.

Unfortunately, they can't agree on player value and who can blame them? I have absolutely no idea what anyone fetches on the market. I am legitimately clueless. Anthony Rendon kind of ruined the whole thing so don't listen to any of the experts out there. Needless to say this will be the most interesting offseason of my Cubs life and it will have nothing to do with our own roster. I can't wait to see where these guys sign and for how much.

All I ask is that it's not back in Chicago. At this point I think we just need some closure and that's certainly not happening with these guys doing a victory lap, much less doing ESPN 1000 appearances. Absolute fucking chaos to kick off the week but I'm happy to see cooler heads have prevailed.

At the end of the day, the reason it didn't work out is because it couldn't work out. To me that's really all you can say about it. Jed picked up the ball and put it in his court.

PS - The Ricketts have plenty of money.