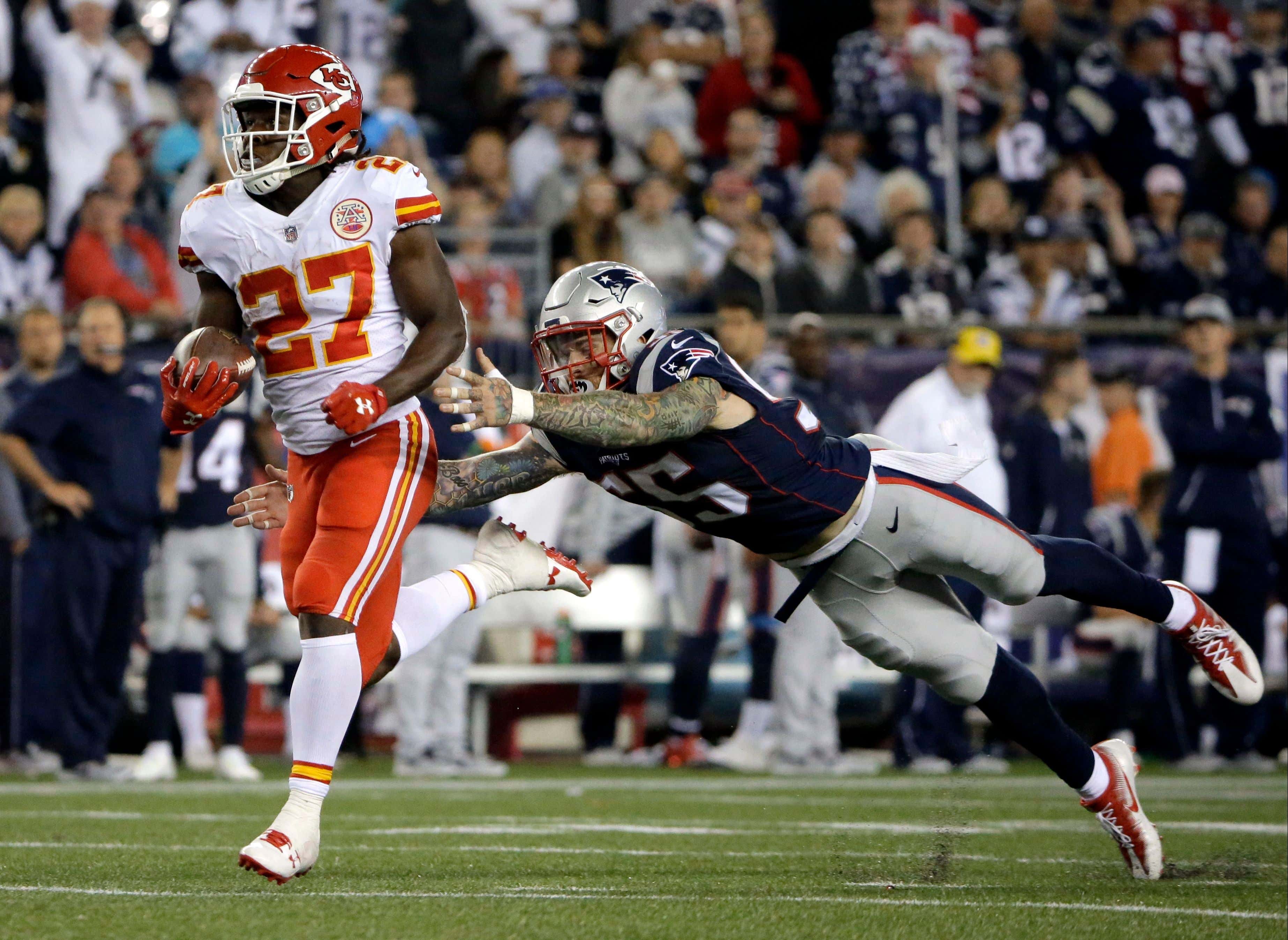 What a piece of work is Cassius Marsh. The seven year veteran of seven NFL teams who ended last year on the Steelers roster after being released by the worst team in the league is nothing if not persistent. At least when it comes to bitching about his brief stay in New England.

If you're a Patriots fan and you don't recall his time in Foxboro, don't beat yourself up about it. In his nine game Pats career in 2017, he did very little to distinguish himself. It wasn't until Bill Belichick had reached the limits of his patience with Marsh's constant pissing and moaning about being asked to do the things that had hung five (now six) banners in the corner of Gillette and cut his ass that Marsh did anything memorable. Which was to take his bitching public. And tell stories about his cup of coffee in Foxboro, with himself as the hero:

And famously saying, “They asked me to do a bunch of stuff that I had never done: covering running backs and receivers and basically almost never rushing the passer, which is what I did in playing defensive line. They don’t have fun there. There’s nothing fun about it. There’s nothing happy about it. I didn’t enjoy any of my time there, you know what I’m saying? It made me for the first time in my life think about not playing football because I hated it that much.” Before adding that he was happier landing on a 49ers team that was 1-11 when he got there than on the defending Super Bowl champions, who went on to winning the AFC title that same season.

“The Patriot Way is pretty, it’s extremely impressive. Like, they work day in and day out, their work ethic over there, what they instill is pretty legendary. But they also treat players like crap,” Marsh stated.

“They don’t, you don’t have like — you don’t have a lunch, period,” Marsh said. “You get there and you have to make time to eat in between meetings. And they’re like 5-10 minute periods where I would literally go scoop food and put in in a cup and like just crush it real quick before I got to the next meeting. It’s just like there’s no … no B.S. There’s no fun.”

“Here’s the thing. Like, over there, nobody says anything publicly, because they’ve won so many championships. So you don’t want to upset the fan base, because after you win a Super Bowl, you can get paid for signings in New England for the rest of your life, because you’re a Super Bowl champ,” Marsh said. “So it was funny like when I did that article, a lot of the players like thanked me for like making it public on how bad they treat guys.” …

“Dude, OK. So [laughing]. Yo, so, imagine like, oh man … imagine you’re working like a 9 to 5, and like, everybody’s at like a team meeting, right? And it’s almost in like a school assembly, OK? And the dude who walks in is like the CEO and he’s like an old dude who you know just plays no games. So like when he walks in, it’s dead quiet. Like … everything stops. All phones get put away. All laughter, any type of little chit-chat, done. K? Nobody plays around with Bill. I mean … nobody plays with Bill for the most part,” Marsh said. “So he walks in there and then he comes up to like a podium and he addresses the team for like 45 minutes to an hour every morning. He talks about the GM’s history, talks about the team’s history, talks about defensive, offensive coordinator’s history, the way that they used to run their defense, the way that they run their defense now, the history of all of the coaches.”

I have to confess. I owe Cassius Marsh an apology. All this time I assumed he was just an ordinary, garden variety malcontent. That guy in every workplace who burns more calories complaining about the job than he ever puts into the job. That guy who's always around when work is slow, but then suddenly has to go grab a smoke or spend 45 minutes in the can as soon as it gets busy and everyone's stressing out. The football equivalent of the co-worker so dependably undependable, you can set your calendar to him banging in sick on the Friday before a long weekend.

But had him all wrong. I had no idea working conditions under Belichick are this bad.

Players only get a few minutes to grab a cup of food between meetings? I can only imagine what's in that cup is gruel because this sounds like a Dickensian workhouse.

They probably don't even give him a juice box and a cookie for after. And check out Belichick being all business in these team meetings. What does he think these things are for? Work? Preparation? Getting his players thinking about coaching tendencies and situational awareness? I mean, would it kill him to mix in a funny story or a song or maybe give 'em that tight five he's working on for Open Mic night? Michael Scott would at least do characters to make those conference room sessions lively.

I mean, does the NFLPA know about this? OSHA? The UN? Amnesty International? There are kids in foreign lands assembling phones and pricey sneakers for pennies a day who don't have it so tough. There are constitutional amendments that are supposed to outlaw this kind of cruel and inhuman treatment.

It makes you wonder how the other Patriots can stand it. After hearing about how they put their phones away and pay attention for 45 minutes to an hour every day, I'm surprised they're not pitching themselves off the top of the lighthouse like the workers in those aforementioned overseas factories, rather than face another day of that horror.

I'm talking about the ones who've been putting up with this despair and depravation for so long. Devin McCourty. Mathew Slater. Dont'a Hightower. James White, just to name a few guys with multiple rings who've had plenty of opportunities to leave but haven't. Or the ones who left and came back, like Kyle Van Noy and Pat Chung. Or the new guys, whom I've been told by team employees love it here, like Nelson Agholor, Hunter Henry and Jalen Mills. We can only assume all of them are being mind controlled somehow, like the (mild spoiler) the women from the Red Room in "Black Widow."

At least Marsh was not susceptible to Belichick's brainwashing and escaped. And perhaps someday, he can win that third playoff game of his career that's been eluding him for the past four years. As long as he's playing for a coach who appreciates that it's all about having big, leisurely lunches and fun meetings filled with laughs. Meanwhile all Belichick understands is the kind of fun that happens after the season.