There's a lot that goes into making a perfect South Shore-style bar pizza (SSBP), which is very different than other bar pizzas. SSBP is a unique 10" pan pizza that originated in the South Shore section of Massachusetts. There isn't a thick, bare crust around the perimeter of the pie so the sauce, cheese, and toppings go right up to the delicious laced edges. The slices may be smaller than other styles of pizza, but the flavor isn't. It is to the South Shore what apple pie is to Americana.

Great examples of South Shore Bar Pizzas. 10" with toppings all the way to the laced edge. (Ultimate Pizza, South Easton)

There are several key ingredients that go into making a SSBP, like dough, sauce, cheddar cheese, and various toppings. Then there's oven temperature and cooking skill which also play an important role, but the one item that makes everything possible is the 10" pizza pan, without it, making traditional SSBP is near impossible.

There are many different brands of 10" pizza pans on the market, but what distinguishes one from the other is the type of metal they're made of. Some are aluminum while others are steel. So if you're making traditional 10" SSBPs for patrons, friends, or family, which is the best pan?

I believe you've got to listen to those with experience and the 10" SSBP pan recommended by the majority of pizza chefs currently making traditional SSBP in South Shore bars, pubs, taverns, restaurants, and pizza joints, is the Bay State non-stick steel pan and Bobby Owens has become the face of the company. The pans are made out of heavy gauge non-stick steel and there's nothing flimsy about 'em, they've got some real heft. The pros will tell you their pizzas slide out of Bobby's pans with very little effort and without sticking, which can be an issue with other pans. Bobby supplies pans to some of the oldest and most popular SSBP spots in the South Shore. 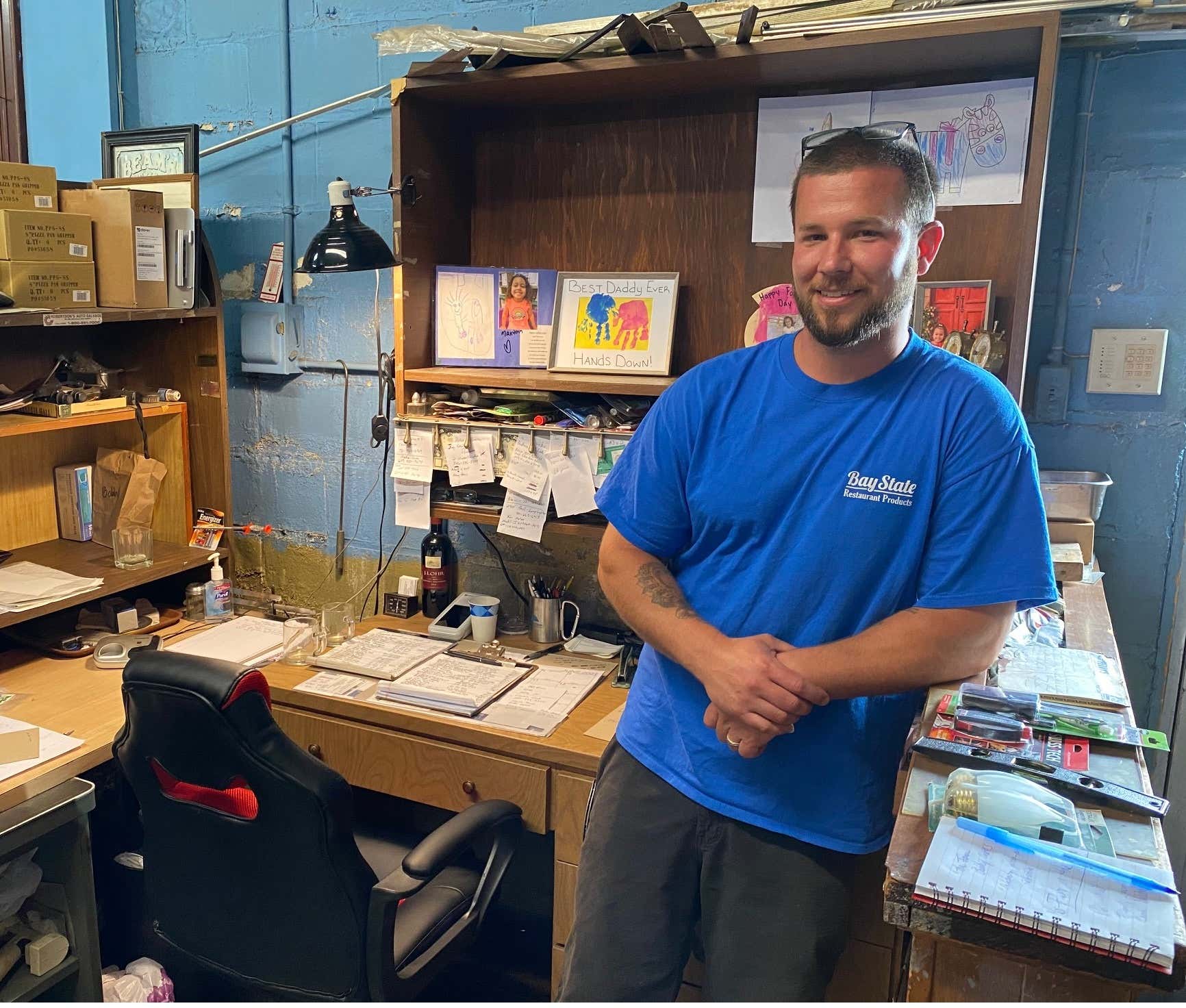 I recently took a ride to Bay State Restaurant Products in Brockton, MA, "City of Champions", to pick up three 10" pizza pans I pre-ordered a month ago. That's right, you have to pre-order the pans because of the high demand. When they're back in stock Bobby will call you himself to let you know they're in. My trip to Brockton was two-fold, I also wanted to talk with "The Famous Bobby Owens" as he has come to be known. Bobby is the fourth generation Owens in 75 years to work at Bay State Restaurant Products. He is currently second in command behind his dad, and definitely heir to the throne. 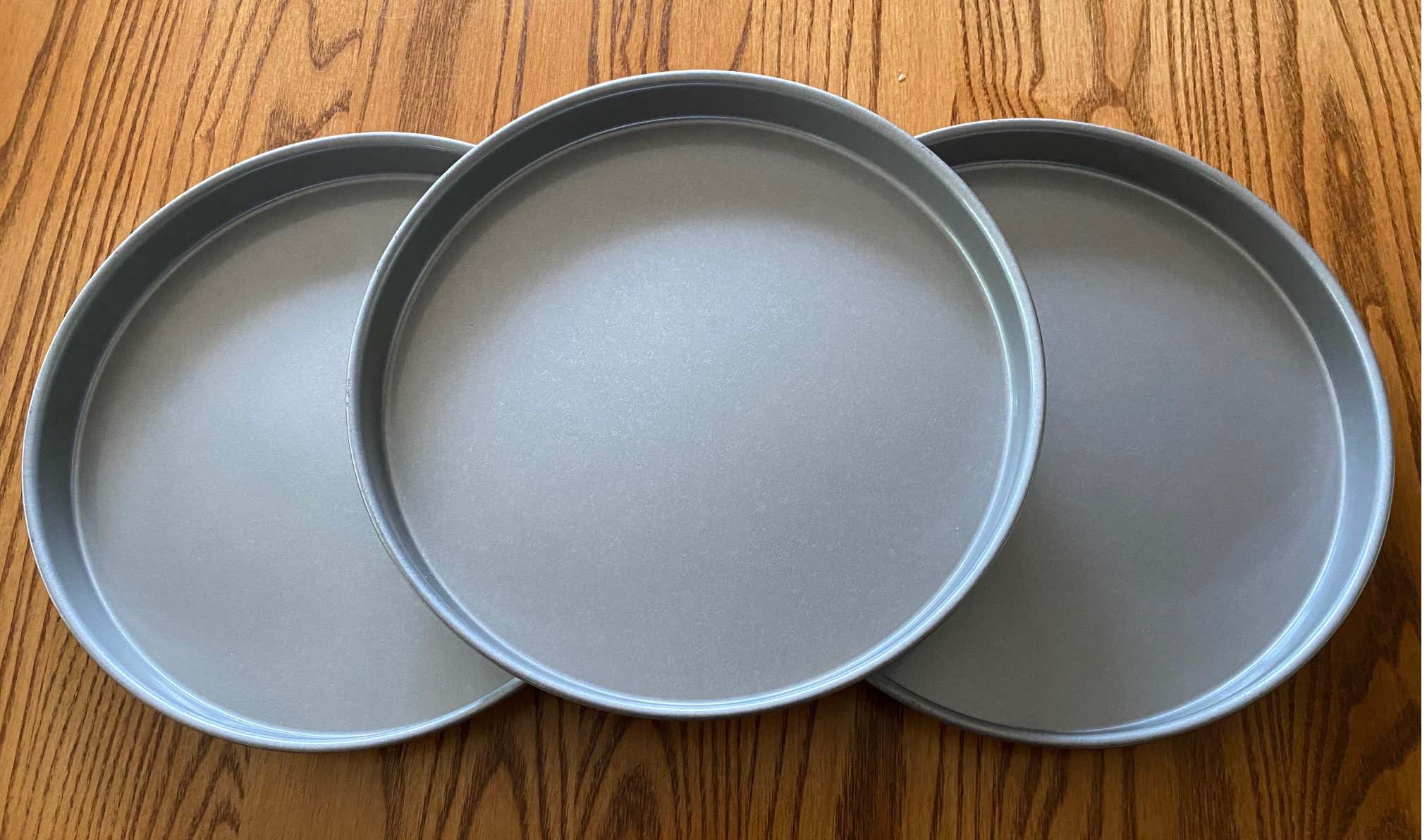 The business is still located in the same building Bobby's great grandfather purchased in 1946 and if you're a fan of old-fashioned hardware stores, their store has a similar charm. If you're local it's worth taking a ride to Brockton, considered by many to be the mecca for SSBP, to get your restaurant or kitchen supplies. If you're not local, they'll be glad to take your order over the phone and ship it to you. When they get a new shipment of pizza pans Bobby regularly comes in on Saturdays and Sundays to pack and label. He doesn't want anyone to wait for their pizza pans any longer than they have to. 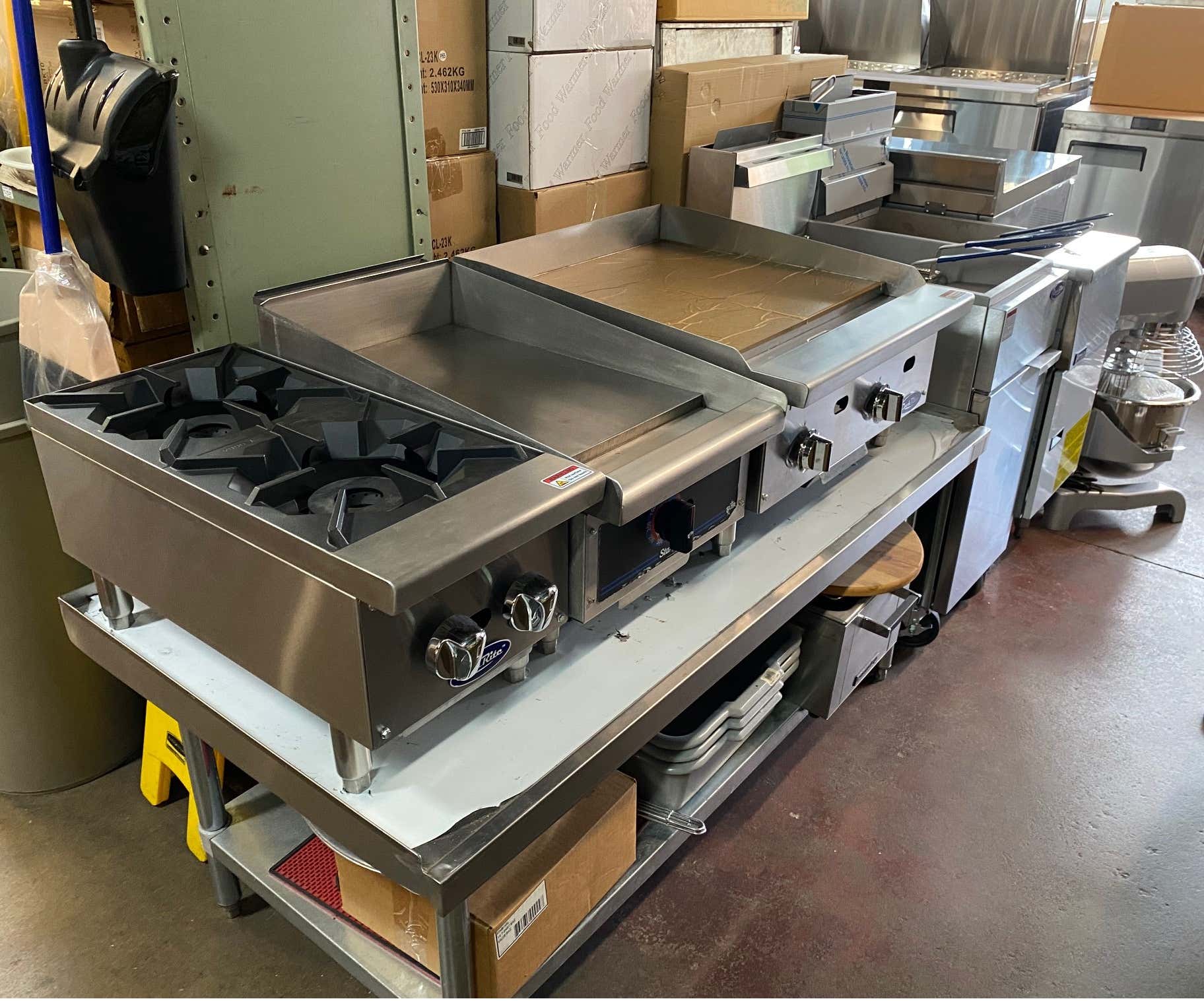 At Bay State, it's not only about 10" pizza pans. They sell big restaurant equipment too.

Bay State doesn't only sell pizza pans, they stock well over 15,000 items, and Bobby and his Dad, Bobby Sr. are very fussy with the products they choose to put on their shelves. If you have a "stainless steel fetish", Bay State can fulfill your wildest dreams from refrigerated units to sandwich prep trays, which they supply to hotels and restaurants. They also stock restaurant-quality aluminum and stainless steel fry pans and cooking utensils. Everything is of the highest quality and because the business is family-owned, the pride is evident from the way they display their products to their friendly customer service.

Restaurant supply companies are relatively unknown to those outside the food industry. So how did young Bobby become known as "The Famous Bobby Owens" and "The Celebrity Pizza Pan Salesman"? It's all about service, personality, and great pizza pans. Spend 10 minutes talking with Bobby, a 2006 Brockton High School graduate and a father of a three-year-old daughter Makenna who has already started making her contributions to the family business, and you can sense Bobby's commitment to the business, his customers, and the products, especially his popular pizza pans. 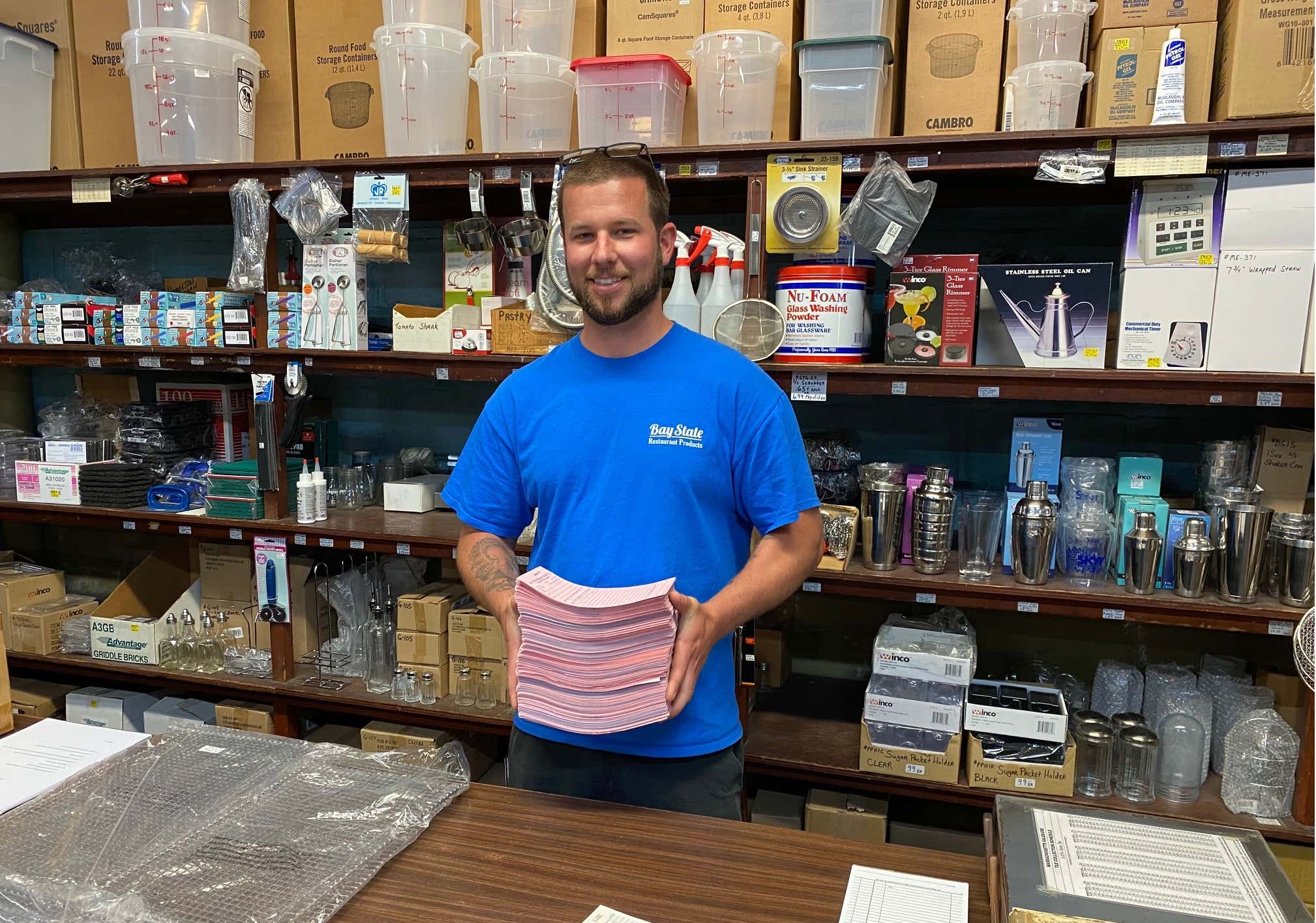 2020 was a difficult year, but it was also when SSBP's popularity soared, and not just in Massachusetts…

It was during the Pandemic that South Shore-style bar pizza's popularity soared. Bobby credits Kerry J. Byrne and the Facebook group he started, South Shore Bar Pizza Social Club, for the rise in popularity and also for his unexpected celebrity status. The page has continued to add new members and is currently at 35,000 and growing. Byrne speaks for himself and his members when he says we're "Devoted to our love of South Shore-style bar pizza, a working-class tradition in the pubs, taverns and dive bars south of Boston, Massachusetts".

Posting a picture of any other type of pizza on the page will earn the poster several  #NSSBP (Not South Shore Bar Pizza) responses. They're loyal to SSBP and after a city employee Dennis Gillpatrick, turned Bobby on to the page and members started ordering his pans, a star was born. Normally, Bay State sold approximately 1,000 pans a year, but during 2020, with people quarantined during the pandemic and experimenting with making SSBP at home, they sold more than 5,000 pans. And, it wasn't all local either, Bobby's selling pizza pans across America, from Florida to Alaska and everything in between, all 50 states in fact. He's even selling them internationally. SSBP is no longer limited to the South Shore, people across the country and beyond are catching on. 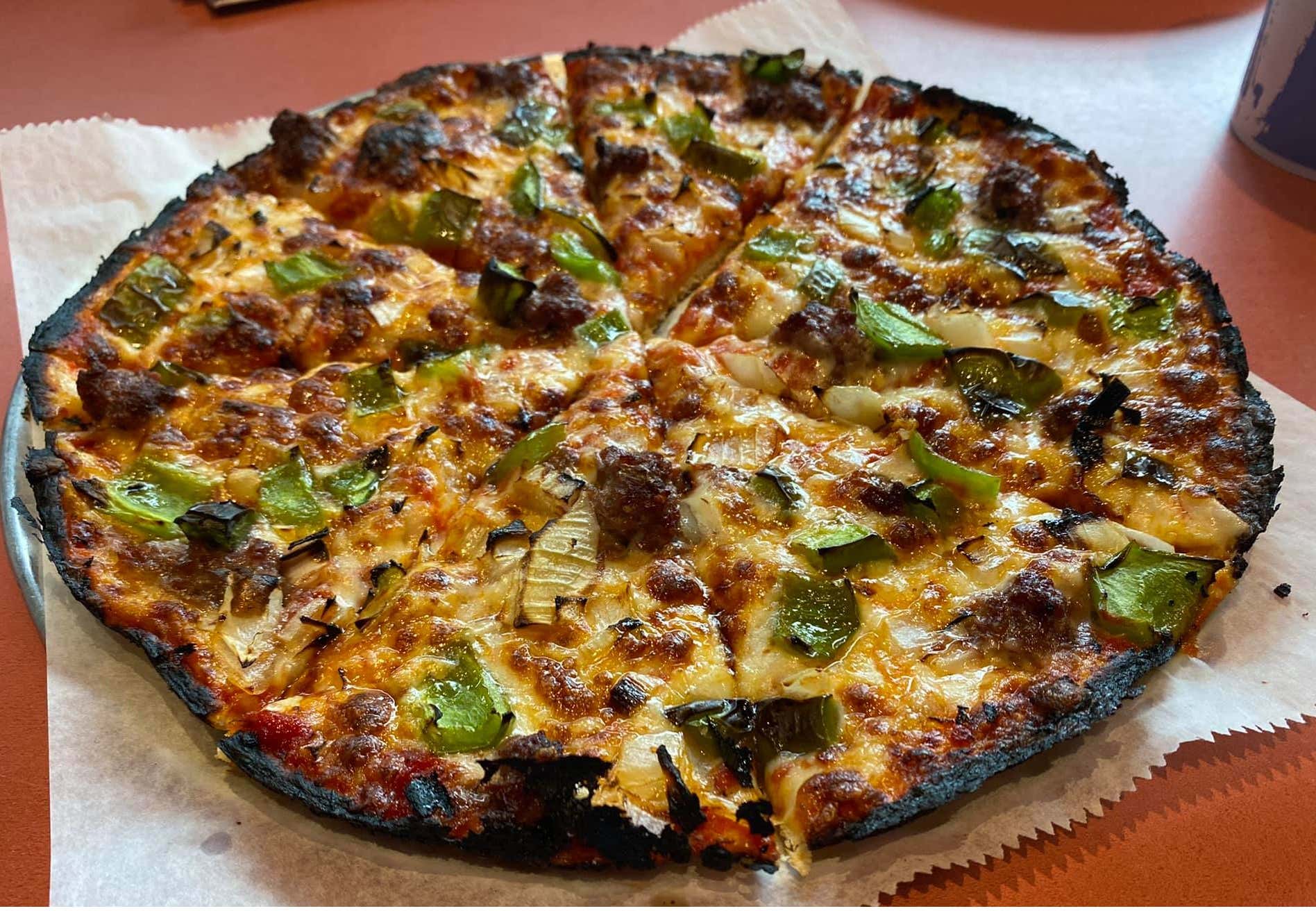 Despite all the attention, Bobby has remained a humble guy and he's extremely grateful for all the support and recognition he received during the pandemic, publicity that helped him establish himself as a "Celebrity Pizza Pan Salesman" and "The Famous Bobby Owens".

To say South Shore-style bar pizza is "all the rage" is an understatement. Byrne has so eloquently called the 10" pies, "America's most delicious and most eccentric pizza tradition". One pizza shop owner with 35+ years of experience told me he thought about adding different types of pizza to his menu but he's not about to change anything right now when his SSBP is all the rage. He makes one of the best.

People love Bobby Owens' pizza pans so much they've invited Bobby to their homes to fish, hunt, drink beer and eat pizza. Bierdock Brewery in Spruce Pines, North Carolina is planning on naming a pizza after Bobby and to him, that's an honor of the highest degree, one he doesn't take lightly. No word on the toppings yet… 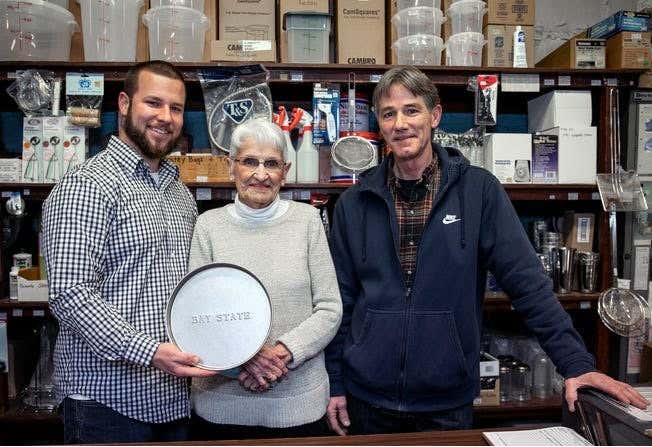 Bay State has been a family-owned business since 1946. (Bobby with his grandmother Dianne & his dad Bobby Sr.) Courtesy of the Brockton Enterprise

In a world full of big-box stores and telephone reps who put you on hold forever, you can still call Bay State Restaurant Products and your call will be answered by Bobby's 89-year-old grandmother, Dianne Owens, who is full of energy and enthusiasm. She's been there from the very beginning. She sits at her desk in a tidy office that hasn't changed much in 75 years. Bobby's 64-year-old dad still works hard every day running the business and his desk is best described as "neatly cluttered". Bobby and his dad deliver the larger items to local clientele and they stock parts and provide service for many of the products they sell. 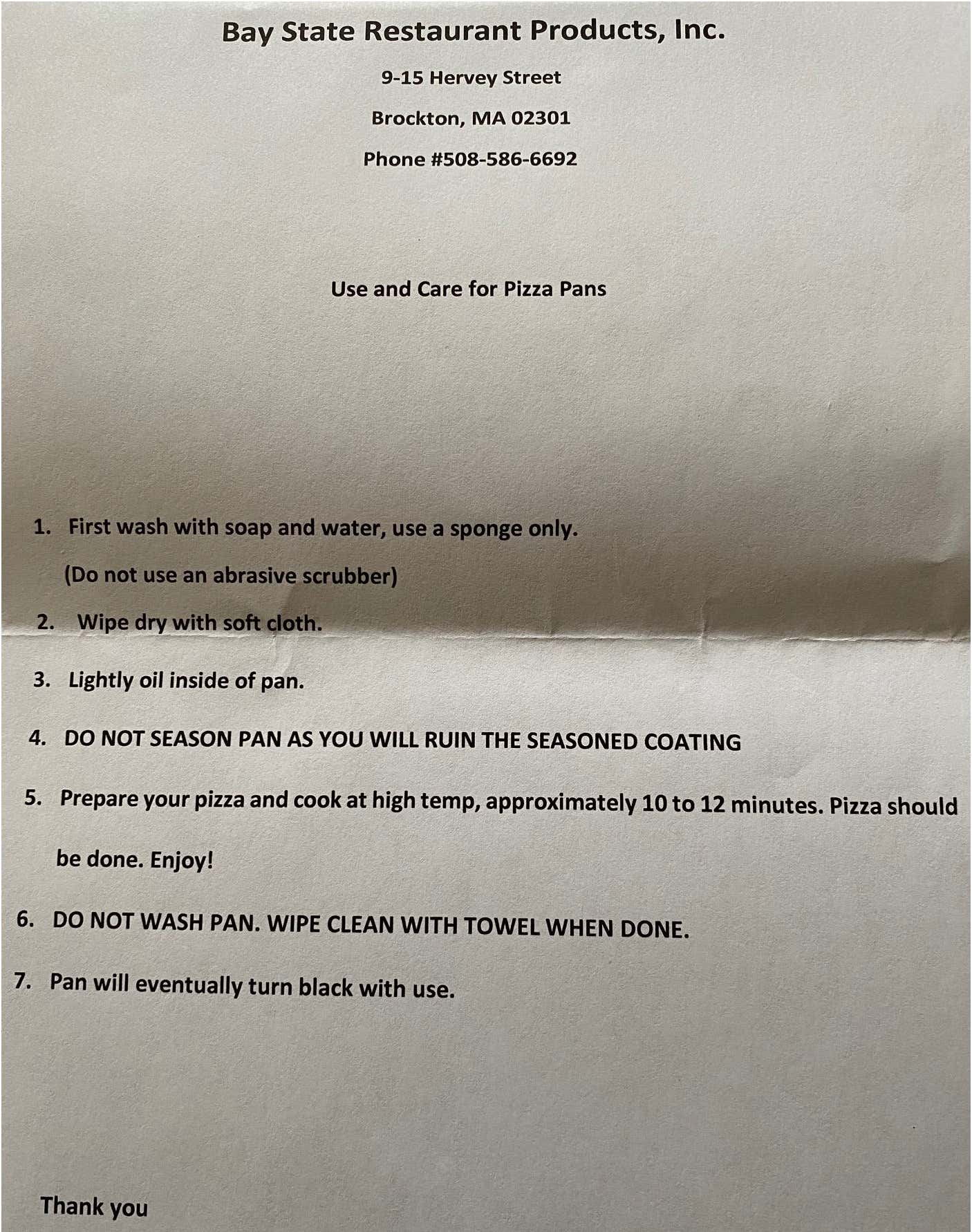 Included with every purchase of Bobby's pizza pans are his "Use and Care" instructions.

So what's next for Bobby? Many of us have suggested a signature pizza pan with "The Famous Bobby Owens" embossed on the inside. He's already made some pans that say Bay State, but one acknowledging the celebrity would certainly be a highly sought-after item. 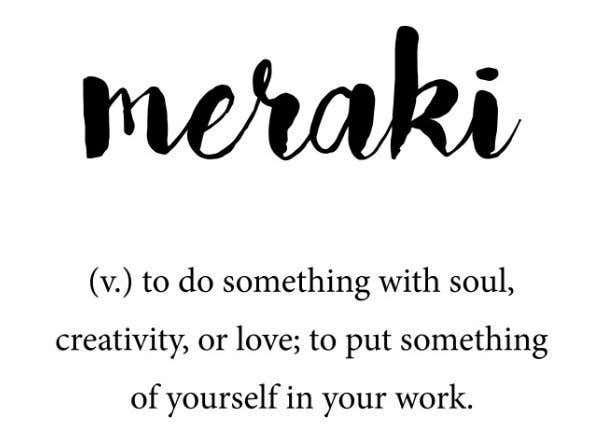 Bobby's earned his celebrity status with hard work and dedication, not too unlike his predecessors did when they started the business in 1946. The effort four generations of Owens have put into Bay State Restaurant Products can be summed up best by the Greek word "Meraki", which means "to do something with soul, creativity, or love; to put something of yourself in your work". Bobby's very passionate about his 10" pizza pans, which were first offered at Bay State decades ago. Recently, Bobby's pizza pans have risen to a whole new level of popularity thanks to Kerry J. Byrne's Facebook page. Bobby's only wish is that his Great Grandfather and Grandfather had gotten a chance to see the overwhelming success of their original pizza pans.

The success of Bay State Restaurant Products, which just celebrated its 75th year in business, and the recent boom in "The Famous Bobby Owens" pizza pan sales, is proof that the popularity of South Shore-style bar pizza is no flash in the pan…