But nothing, and I mean NOTHING beats a bacon, egg, and cheese on a roll (preferably poppy seed from the Bronx) in that aluminum foil on the outside and paper on the inside.

That's not even an opinion, it's a fact. If you plop down a bag of BECs, SECs, HECs, and THECs/PRECs on a table, the bacon, egg, and cheese is going to be empty first. If you ask for a breakfast sandwich without specifying what meat you want, the person taking your order should just default to a bacon, egg, and cheese.

Now I fully understand that some idiots on the internet may have killed the aura of bacon by sucking its dick so much that it became an annoying meme. But there's a reason it became a meme in the first place and it's because bacon is soooooo fucking good. Maybe not the leading man of a meal like some schmucks tried to make it. But an elite complementary piece to lunch sandwiches and the king of breakfast sandwiches. Bacon on a lunch sandwich is Tom Brady on those early 2000s Patriots teams while bacon on a breakfast sandwich is Tom Brady on those mid 2010s Patriots teams.

Even ordering it just feels right. When you tell the deli cook that you want a baconeggandcheese, it almost feels like slipping a puzzle piece snugly into a puzzle. Throwing ketchup into that order may make you a heathen in my eyes for ruining such a great sandwich, but that's another blog for another time.

Anyway, shout out to the BEC for being the perfect food for the most important meal of the day, which in turn makes it the most important food in the world as well as an elite lunch option if you turn the roll into grilled cheese and add some chicken like the good folks at The Wooden Spoon in New Rochelle did when they made me my own sandwich named The Clem.

That slight drip of yolk…

Speaking of the BEC, Glenny Balls, Eddie, and myself have created the BEC bet (Balls, Eddie, Clem) where we will each bet a first inning under every day.

For those looking to responsibly place a bet in the Barstool Sportsbook app with three jolly fellas who clearly love a good bacon, egg, and cheese, our first BEC is in less than an hour with three glorious day games taking place with AL and NL Central teams, which I feel like are the Bacon, Egg, and Cheese divisions for First Inning No Runs bets. 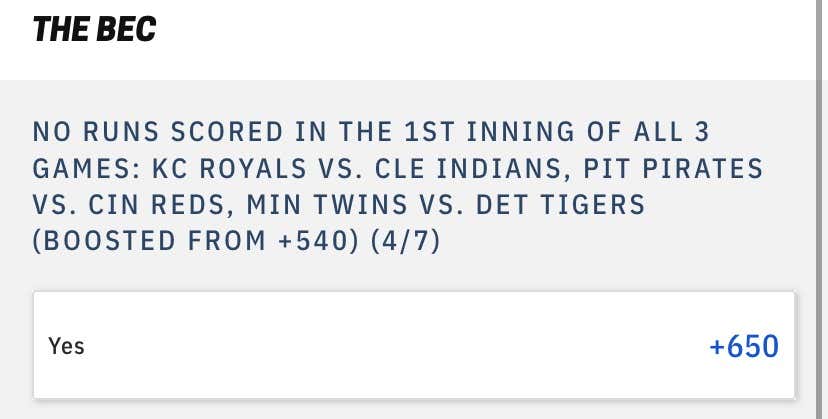 Sidenote: After writing all this and including all those gifs, I think I need to buy a BEC for lunch. And dinner. And breakfast tomorrow.