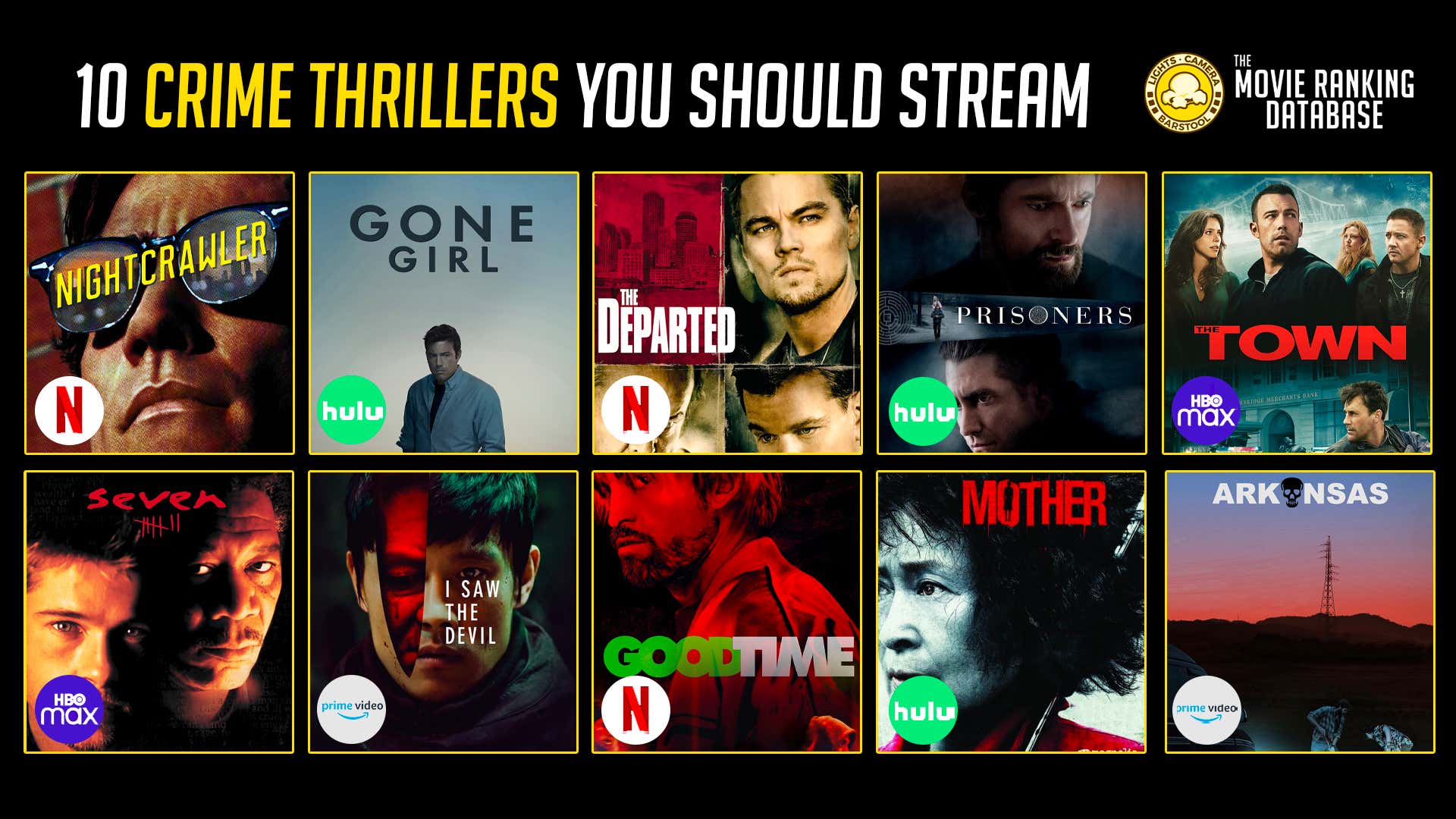 As a crime genre junkie, I am pumped that Barstool is finally getting into the game with Kirk's new pod, The Case.
Forthose of you that have already listened and need more crime content, here are 10 great crime movies for you to stream:

1. Nightcrawler (Netflix): This is one of many amazing crime-movie roles by Jake G, and one of my favorite roles of his overall. His weird, off-putting character keeps you totally engaged with this story which, on paper, maybe shouldn't be as enthralling as it is. It's dark, freaky and has a lot to offer any fans of crime movies.

When Louis Bloom, a con man desperate for work, muscles into the world of L.A. crime journalism, he blurs the line between observer and participant to become the star of his own story.

2. The Departed (Netflix): It's the Departed. You know this movie and you know that it fucking rules. All-Star cast, All-star director, all-star script, all star movie.

"An undercover cop and a mole in the police attempt to identify each other while infiltrating an Irish gang in South Boston."

3. Good Time (Netflix): This comes from the Safdie Bro's, and you're probably familiar at least by name with their last big movie, Uncut Gems. They're masters at gritty, city-based thrill-rides and Good Time is no exception. Robert Pattinson is in his fucking bag in this movie, and to me, it was the coming out party for him in the post-twilight era.

"After a botched bank robbery lands his younger brother in prison, Connie Nikas embarks on a twisted odyssey through New York City's underworld to get his brother Nick out of jail."

4. The Town (HBO Max): Like the departed, all of you have presumably seen this before. Affleck did a fantastic job showing the nitty gritty of the city he knows and loves, and the cast is fantastic across the board. Great suspense, great action and even better characters. Get Rear Ad some royalties.

"A longtime thief, planning his next job, tries to balance his feelings for a bank manager connected to an earlier heist, and a hell-bent F.B.I Agent looking to bring him and his crew down."

5. Seven (HBO Max): This is more on the pysch side, but this movie undeniably has both plenty of crimes and a lot of thrilling moments. Besides the "What's in the Box' moment, there are a lot of extremely "Holy shit" moments peppered throughout the entire thing. Finchermania run wild, brother

"Two detectives, a rookie and a veteran, hunt a serial killer who uses the seven deadly sins as his motives."

6. Prisoners (Hulu): This movie (from Arrival and Blade Runner 2049 director Denis Villeneuve, is incredibly underrated. 2 phenomenal performances from Jake G and Hugh Jackman, and some other great. small ones. as well. The plot is riveting and i fucking LOVE the ending.

"When Keller Dover's daughter and her friend go missing, he takes matters into his own hands as the police pursue multiple leads and the pressure mounts."

7. Gone Girl (Hulu): Another great Fincher movie makes this lis in Gone Girl. Rosamund Pike and Baffleck were so good in this movie that infuriated and intrigued the hell out of me.

"With his wife's disappearance having become the focus of an intense media circus, a man sees the spotlight turned on him when it's suspected that he may not be innocent."

8. Mother (Hulu): This comes from Parasite's director, Bong Joon Ho. Both this and Memories of a Murder(Avail to rent) are thriller,  extremely well-executed murder stories that keep you on the. edge of your seat.

"A mother desperately searches for the killer who framed her son for a girl's horrific murder."

9. I Saw the Devil (Prime Video): Like Mother, this is a foreign-language thriller that is really gripping. This one, however, takes, you on an insane revenge story about tracking down a serial killer. Check it out

"A secret agent exacts revenge on a serial killer through a series of captures and releases."

10. Arkansas (Prime Video): This is directed by and co-stars Clarke Duke, who you probably most remember as Jacob from Hot Tub Time Machine. I know you might be thinking "What the fuck?", but this movie is fucking weird in the best wya. Maybe a bit more on the comedic side at times compared to the thriller, but there are definitly edge-of-your-seat moments. Also, Vince Vaughn is simply a great drug lord.

"Kyle and Swin live by the orders of an Arkansas-based drug kingpin named Frog, whom they've never met. But when a deal goes horribly wrong, the consequences are deadly."