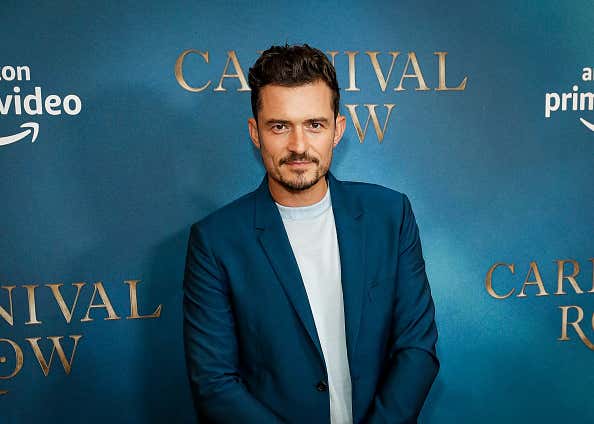 Orlando Bloom — in case you missed it — wrote the year's best, sharpest and funniest satire of the modern, out-of-touch, rich Hollywood celebrity, ignorant to the world around them as they close inward, obsessed with themselves and their money as the world burns around them.

Seriously I can't do it justice, you'll have to read it to see just how genius his mockery of the elites is — how he ridicules them and turns them into caricatures, all while pretending to be one of them just to get the info he needs for this piece on how the Pandemic exposed class inequality and a broken system.

That's what I wrote earlier at least. Turns out it wasn't a joke. Like, at all.

It wasn't a new character in development, or an experimental method-acting phase. It wasn't a prank.

Orlando Bloom wrote that article about a day in his life…dead fuckin serious.

The main article is behind a paywall, but even just seeing the first line is a treat. 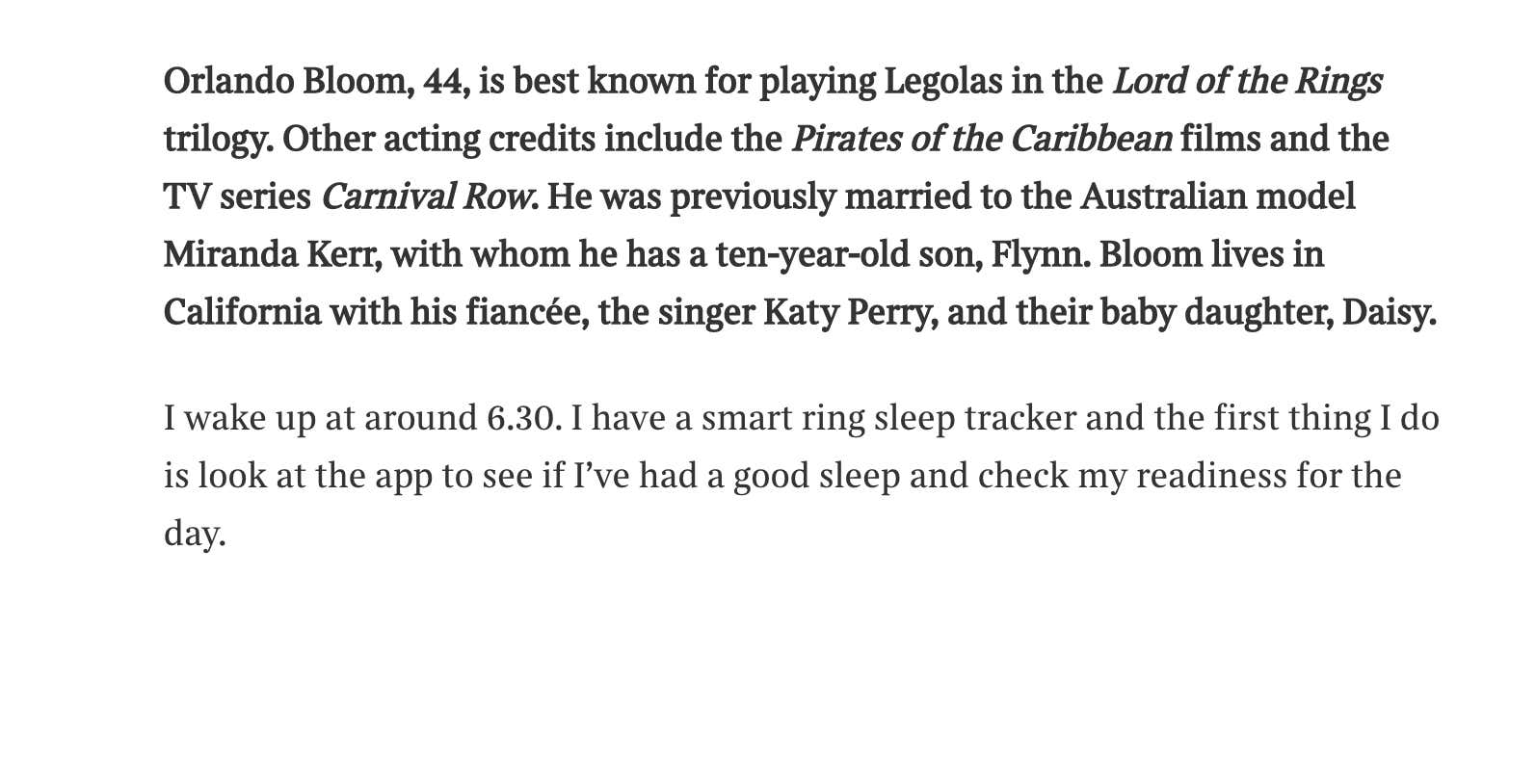 Which gives me a good idea. Let's rank the top 5 moments of Orlando Blooms normal average day of social distancing during the pandemic. Because waking up to a smart ring sleep tracker to check your readiness for the day — (for the non-technology crowd: this is a fancy device that basically tells you, "you just slept, then you woke up. However long that time period was, that's gonna be how you feel." This company literally took "waking up and feeling a feeling" and sold it to fuckin morons like Orlando Bloom for a bajillion dollars) — didn't make the cut.

5) Little Baby Daisy (Live Human Girl) Doesn't Care About Food And Diapers And All Other Aspects Of Being A Baby In General, Wakes Up and Patiently Waits For Daddy To Do "Eye-Gazing Practice" (Because He's a Capricorn) 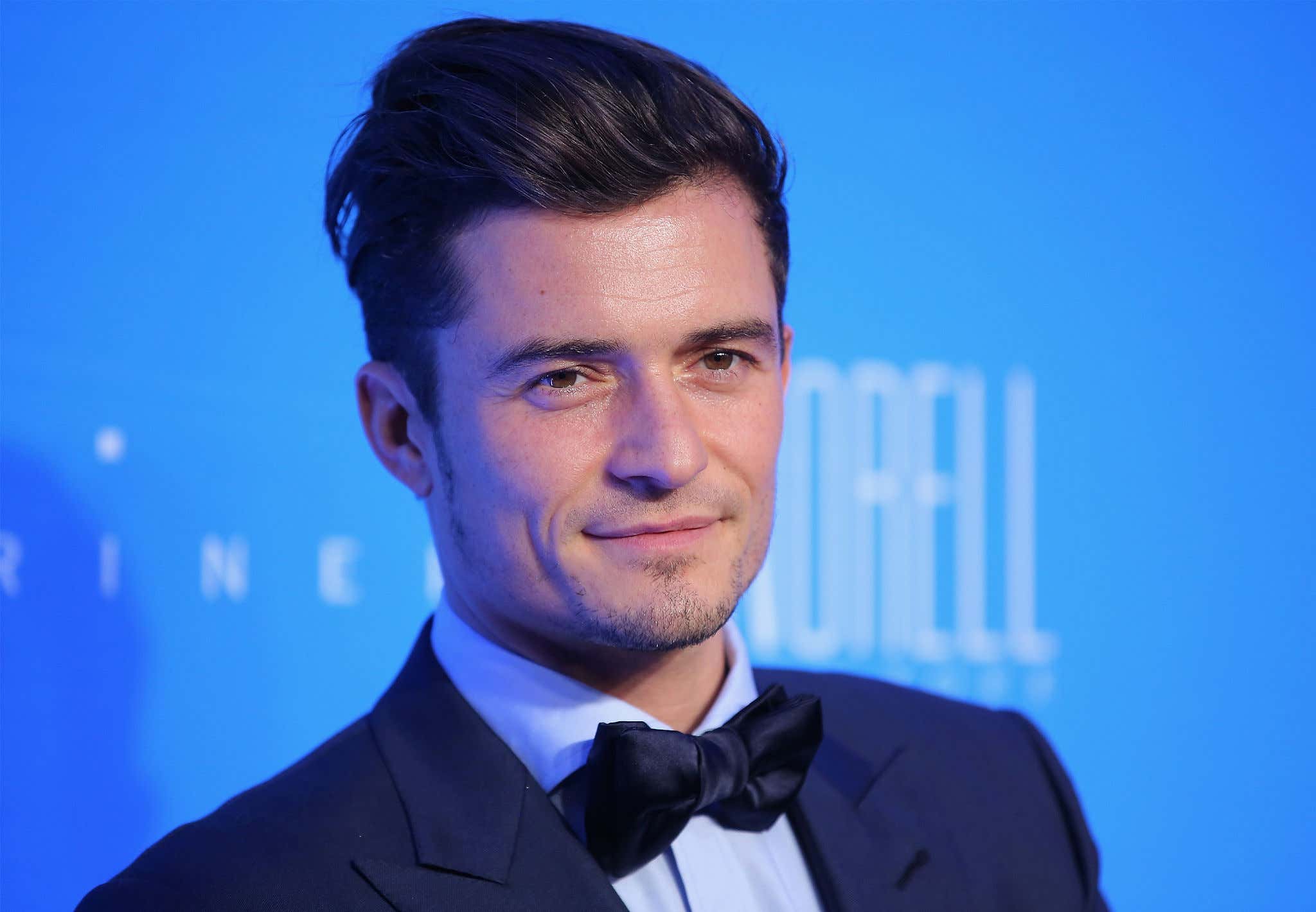 “Then I check on my daughter,” Bloom says, “who’s usually up and cooing in her cot.” No stinky, leaky, diaper changes, no crankiness, no crying that can’t be contained — and, most importantly for little Daisy, no bottle or breakfast immediately.

In Hollywood, we fast after waking. Disordered eating: It’s never too early to start.

Instead, baby Daisy practices “eye-gazing” with her daddy.

I bet you were getting ready to call Child Services, until you saw the "he's a Capricorn" in there. Close call. You almost thought this was not the right way to treat an infant child early in the morning, hungry and with so much poop in her diaper it spread up to her mid-back where it dried and crusted over. Then you saw, oh never mind…he's a Capricorn. He craves routine.

4) If You Read Very Closely, The Rumor That His Wife (Katy Perry) And His Son (Live Human Boy) Aren't Mentioned Once As A Part of His Average Day Is Very Clearly FALSE — They Do Make A Brief Cameo Once, They Are Very Clearly Mentioned One Time, In This, An Entire Day Of His Life

Who the fuck is eye-gazing with Boy if the Capricorn's routine doesn't involve him in any way whatsoever? Does he just not get eye-gazed? Do you age out of eye-gazing? Or is the Boy just like, a Virgo or something with a dangerous energy that doesn't mesh with his Dad, especially not with his moon in retrograde? I have a bad feeling the last guess was the closest to the truth.

Ope, nope, figured it out. Flynn is the Miranda Kerr child. Daddy's not wasting one ounce of his eye-gazing powers on that one, hey,  if you want to eye-gaze so bad why don't you have your stepdad go buy you another Dad? 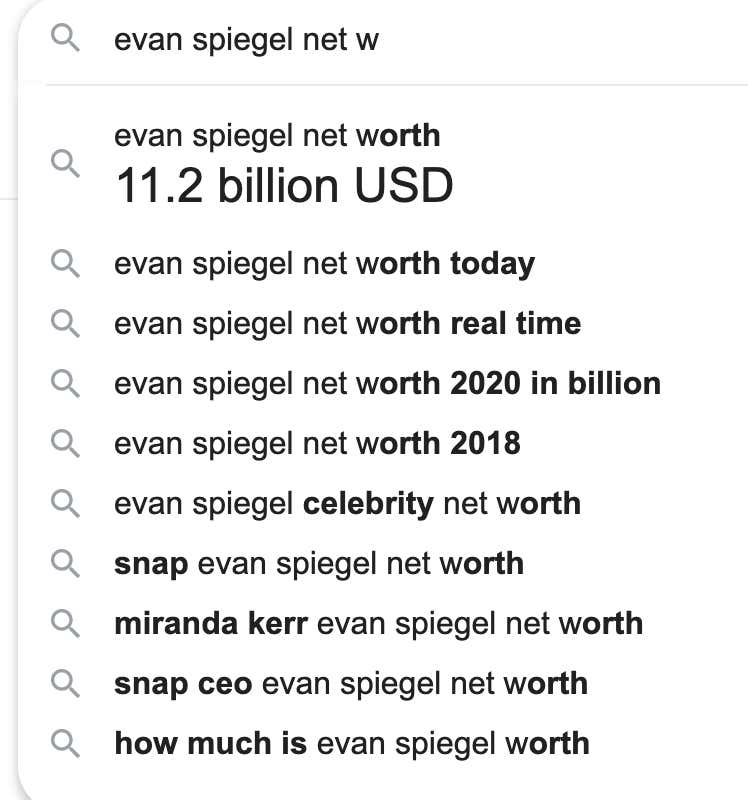 3 and 2) He Spends His Day Dreaming About Roles For Himself……………………………..And Also Women and Minorities Definitely, For Sure In Addition To Himself (As Time Allows)…… Which He Can Focus Intently On "By Changing the Narrative in His Head By Using Ancient Buddhist Wisdom" (Which Also Sounds A Lot Like Somebody Perfectly Describing a Mental Illness) 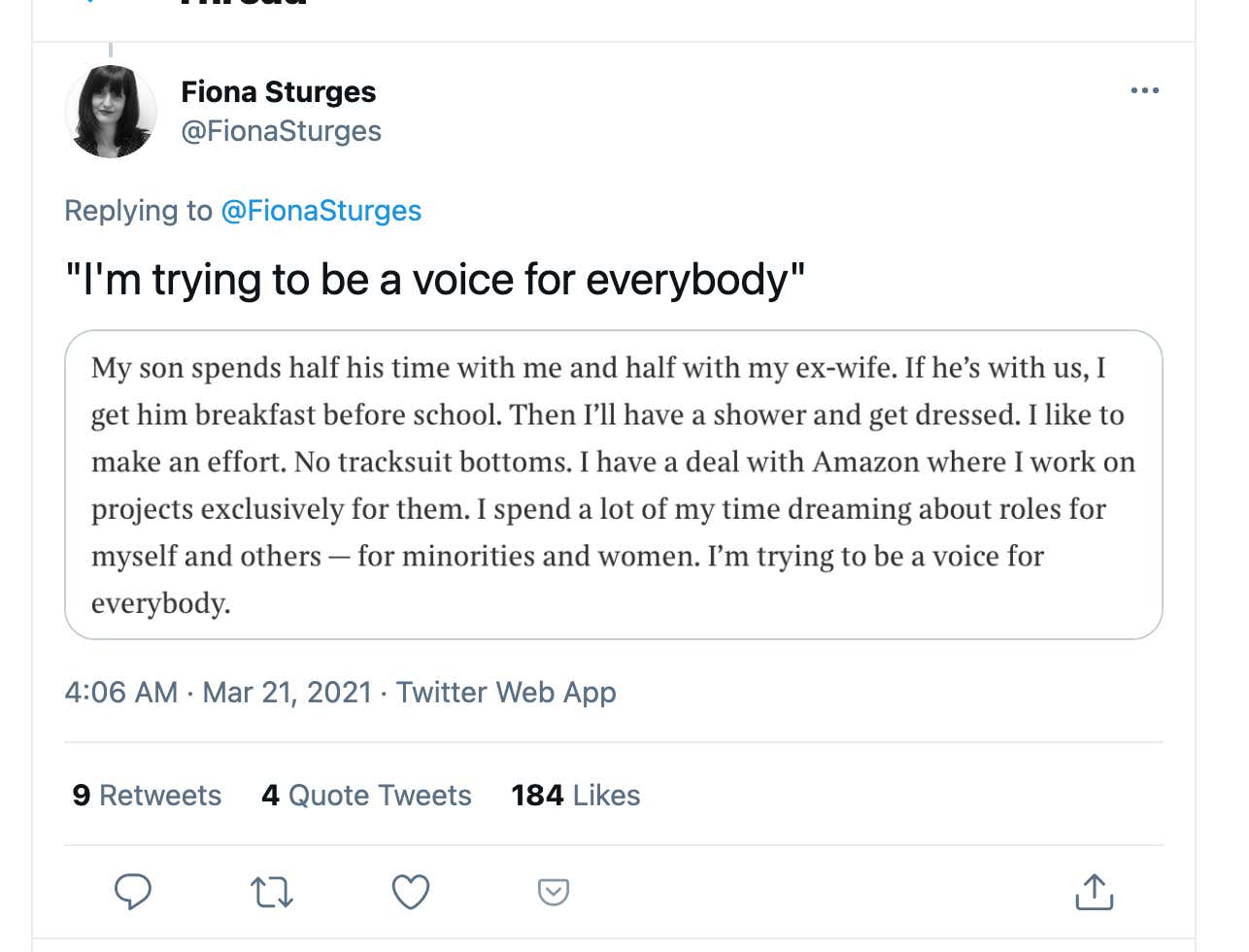 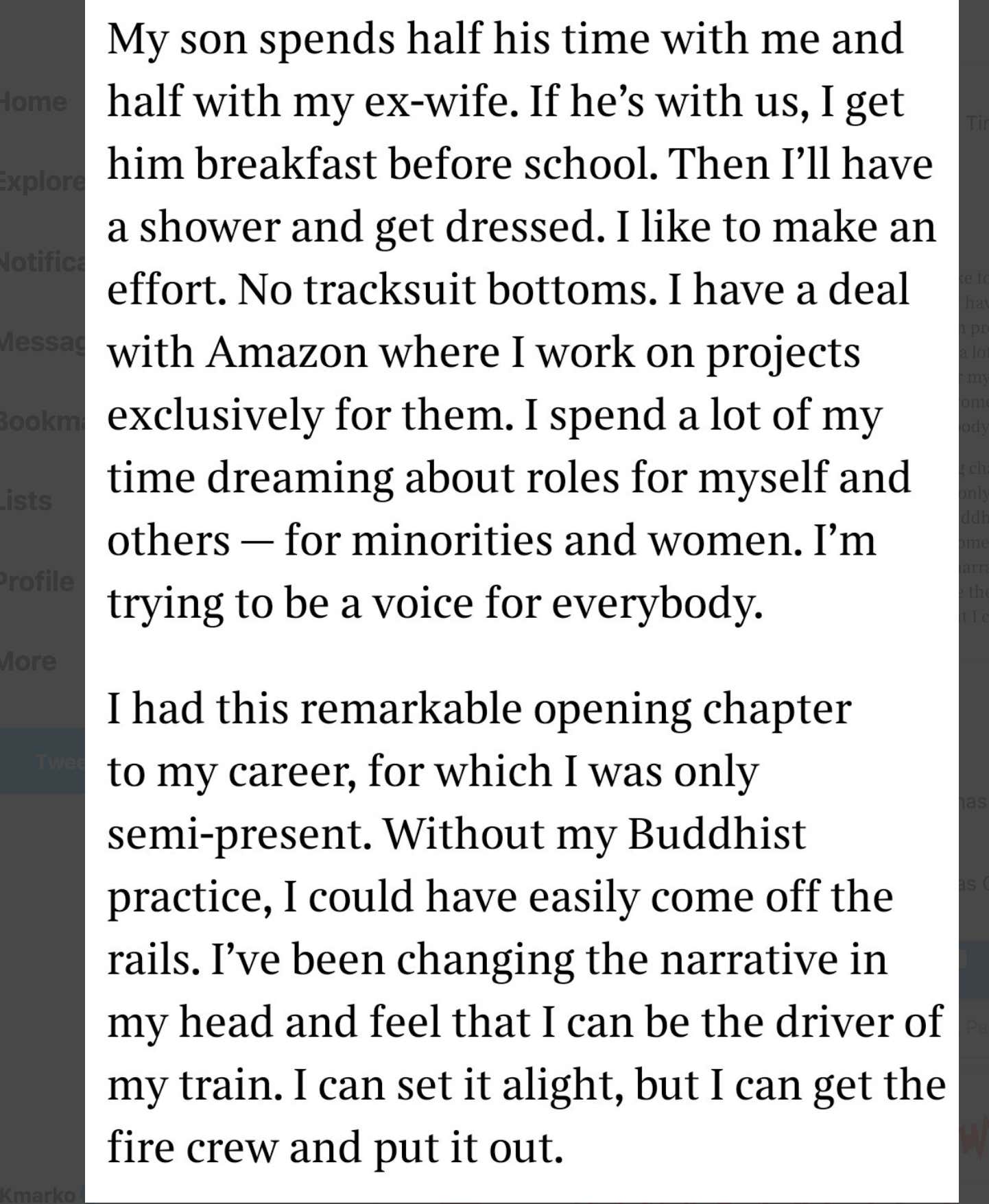 I, too, am swept up by his spiritual, cinematic image of a Narrative Train running off the rails as the little train firefighter men work furiously to save the hero. Only Orlando could turn a routine list of symptoms for a mental illness into an overdramatic movie trailer starring Orlando Bloom.

Bonus: he chants for 20 minutes a day, "religiously." No pun intended, no joke intended: every day. Every day we're chanting.

To be fair: that's some good advice about social media. Now, would it be a little more effective coming from someone who didn't just  IG Story himself doing Buddhism for clout literally 1 second prior to saying? It may, it may not. We have no way of knowing, if there are any young teenage girls out there who just saw their Orlando Bloom fan page light up and got instantly sucked into the black hole of social media. 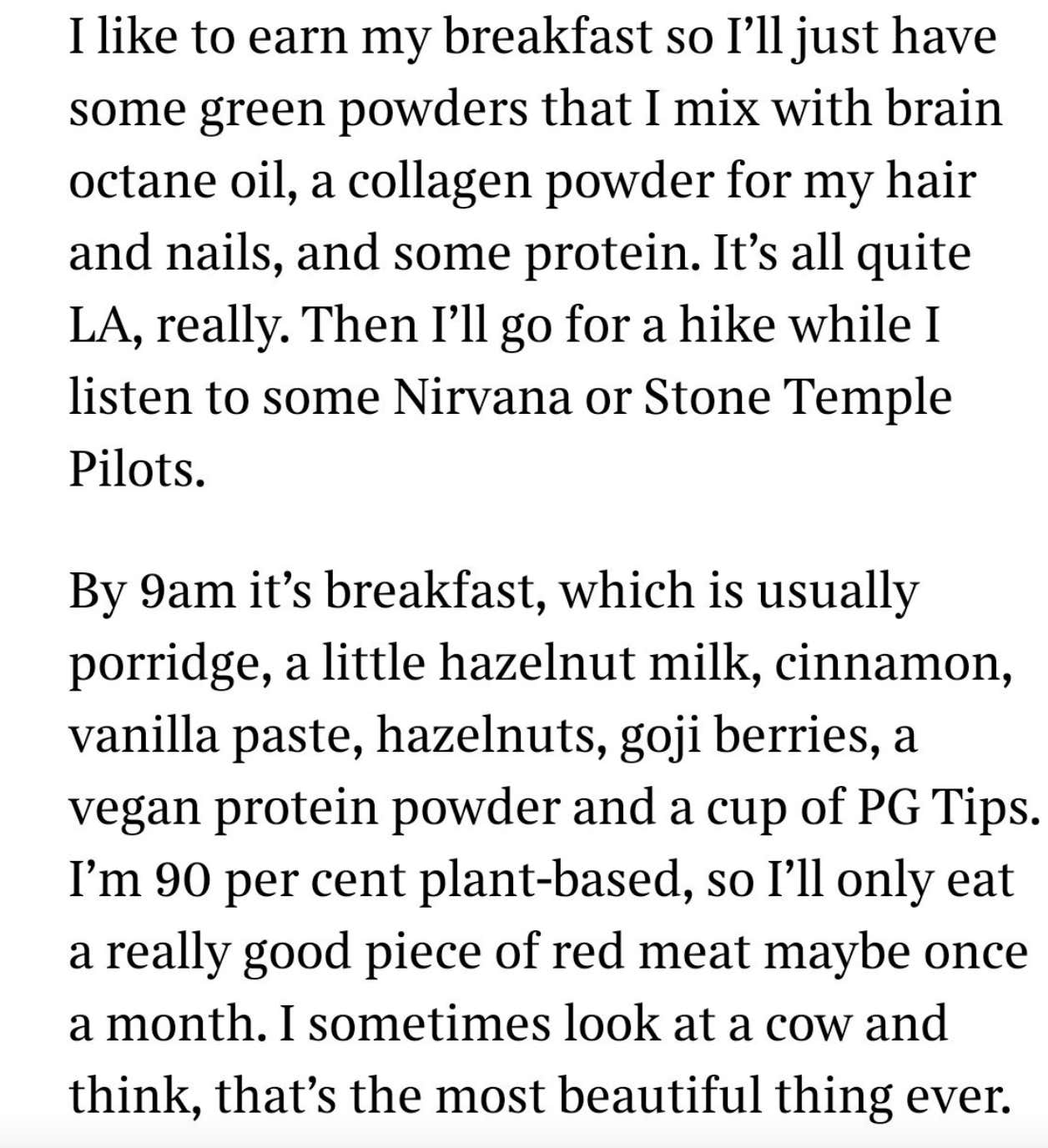 Is this the answer I was looking for? Is Orlando Bloom slowly transforming into Patrick Bateman, the fictional movie character who somehow comes across as 100% more of a real human being than Orlando Bloom did in this article? Someone warn Katy about the Huey Lewis records, when those come out….just kidding, Orlando doesn't remember his family.

Also, don't let him around your cow. I've never heard someone compliment a cow and make it quite that creepy. It's almost impossible to make a thing like that as uncomfortable as he did.

So that's a day in the life of an A-list celeb folks…they really are, Just Like Us!

Seriously, it's tough to come across worse, to more groups of people, at a worse time than Orlando Bloom just did, completely unprompted and on his own. All he had to do was pretend for 30 minutes he wasn't a new-age plant-man douchebag to connect with a whole generation of fans. I mean he's an actor. He literally just had to do his job for like half an hour, and instead he went straight for the goji protein paste and Brain Nitrous Combustion Oil and became the most mocked asshole on the internet.

Seems like just yesterday he was being praised for his dick.