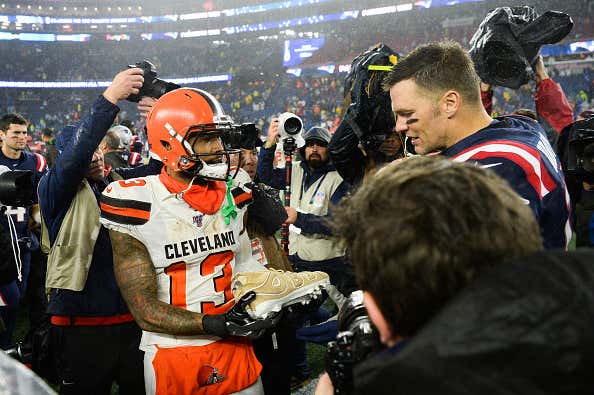 Bleacher Report - Pairing Odell Beckham Jr. with Tom Brady seems like fun on paper but would be tougher to pull off in real life because of the salary cap.

ESPN's Adam Schefter reported Monday on Get Up that Brady "might want" the three-time Pro Bowler, but it would be "challenging to fit a wide receiver in at that number on top of everything else they're trying to get done there." …

CBS Sports - The reality is that Brady intends to play football until he is at least 45 years old, and, quite possibly, significantly longer. As in years. With an "s," as in plural. At this point, 45 is a mere baseline. Might be a worst-case scenario.

Could he play until he is 47? Certainly not out of the question whatsoever. Is 48 the magic number? Well, maybe. Could be. …

He has one year at a modest $25M remaining on his deal, counting a hefty $25M against the cap. He wants that figure to be much lower, according to league sources, and so do the Bucs. He believes he can play three or more years, and so do the Bucs. He doesn't want to move his family or play anywhere else and, you guessed it, the Bucs don't want anyone but him under center for the foreseeable future.

Before it started becoming confused with the reason human beings no longer retain information, the term "googol" was used to denote a number that is 10 to the 100th power. I mention it because over the last 12 or so years, I've been asked how long I think Tom Brady will player approximately googol times. And I've always given the same answer: Until he's 45. Just like the GOAT himself was saying.

The simple reason being that it's something no quarterback has ever done. (Warren Moon, Vinny Testaverde and Steve DeBerg were all backups at 44. And by then George Blanda was strictly a kicker.) And would put a nice ribbon on a career spent doing things no other quarterback has ever done.  It would prove he's onto something with his training methods, and be the perfect marketing tool for TB12 Fitness. Which he could then dedicate the rest of his professional life to, promoting it as the cutting edge of sports medicine and athletic performance.

But now? I feel stupid for having stuck to that. How could I ever have doubted he'd play well beyond that? Sitting here right now, the idea of him hanging up his helmet the year after next is laughable. Beyond laughable. Unimaginable. Incomprehensible. He's going to celebrate his 44th birthday this August with a three year contract extension and the only thing that feels strange about it is the Bucs not making it four more years.

And this business of GM Brady trying to swing a trade for Odell Beckham Jr. is all the convincing you should need that he's in this for the long haul.

Why wouldn't he be? He's taken the NFL - the last bastion of professional sports where the guys in suits still have power over the people in uniform - and turned it into his personal plaything. He's the one in control. The league has become his NBA All Star Game, except no one is picking an opposing team. He got out of his contract in New England. Chose which team he wanted to go to. Got Gronk to unretire and traded for him. Signed Leonard Fournette. Resurrected Antonio Brown's career. Now he's prepared to let Chris Godwin walk and replace him with OBJ. Or sign them both if it so pleases him. Like Max Mercy says of Roy Hobbs, "Anything he wants to hit, he hits."

The reports out of Cleveland all seem to be indicating it won't be as simple as that. That the Browns have no interest in dealing OBJ. Yeah, good luck with that. We've seen what happens when Beckham is unhappy. We've also seen how much he reveres Brady. More to the point, we've seen how Brady has become the gravitational center of the entire league, pulling players into his orbit. And the more talent he draws toward him, the stronger the attraction. If he can add OBJ, it'll be like a Black Hole, with an All Pro roster as Brady's event horizon.

As time passes and Brady's Tampa career goes on, I'm finally getting a taste of what it's been like for the rest of the league all these years. Pinning all their hopes of success on the idea that his career would end and somebody else would get their shot. But that day never, ever comes. And all they are left with is endless despair as he just gets stronger. So if you're not used to it by now, you might as well get used to it. Brady will play forever. He is inevitable.