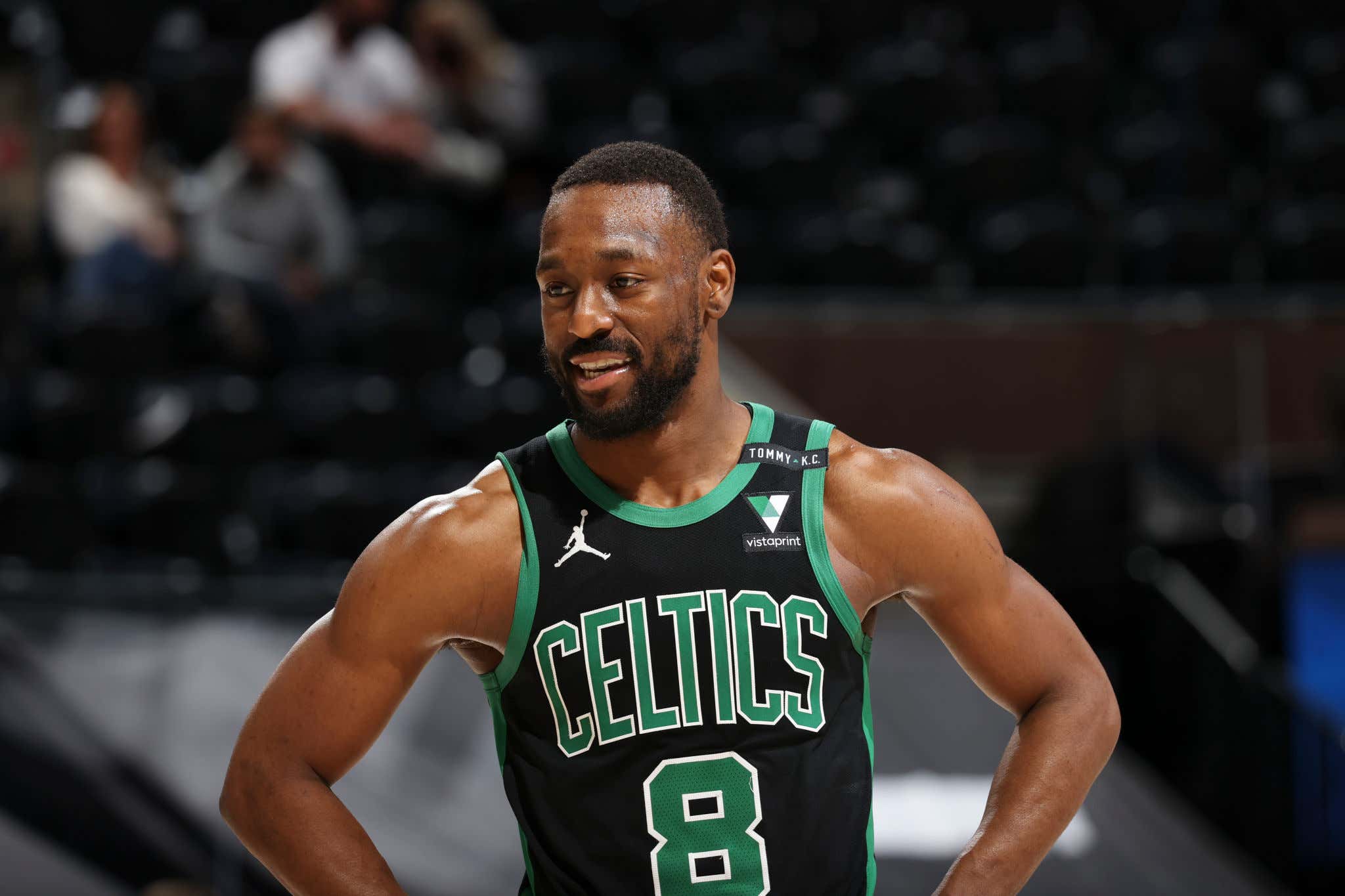 I don't think anyone with functioning eyes will tell you that the quality of basketball being played by Kemba Walker since his return has been anything other than mostly bad. Celtics fans are freaking out, want him traded, think he's washed up, all the things you expect when one of the best players on the team struggles. You're totally justified if seeing how he's shot the ball to start this season has you a little nervous. That's normal.

While I think we can all agree he needs to be much, much, much, much, better, I think it's also important for me to do my part and help explain why you shouldn't be jumping off the Kemba bridge just yet. This is not me saying he's been fine so far, he hasn't. He's been awful offensively and not that much better on the defensive end. But I do think there's one thing most people forget when it comes to Kemba.

We've seen this exact shooting slump before. Even pre-injury.

I went back and looked at his season last year, the one where he made an All Star team for those who don't remember. I found two separate 8-10 game stretches that look pretty damn similar to what we are currently witnessing. The first stretch came way before any of his knee issues started, back in November

So what do we see. Mostly terrible shooting, one really good performance, and then an injury (that was the neck issue on that scary collision in DEN). That stretch was filled with close losses where the Celts just needed anything from Kemba. Not all that different from what we've seen over his first 10 games this year.

OK, maybe this was just him getting comfortable with a new team/system. I can allow that if you want. So then you keep looking over the course of his season, and it brings me to my next stretch right before the All Star Break

Again, not great! The only difference here is they actually pulled out their close games, mostly because at this time of the season Jayson Tatum was going nuclear. We know what happened next. He played way too much in the All Star game and it fucked his shit up basically until the shut down.

Enter the 2020 playoffs. When this team needed Kemba to be at his best. After the layoff his knee looked better and his quickness was back. This is how he started his first 9 playoff games 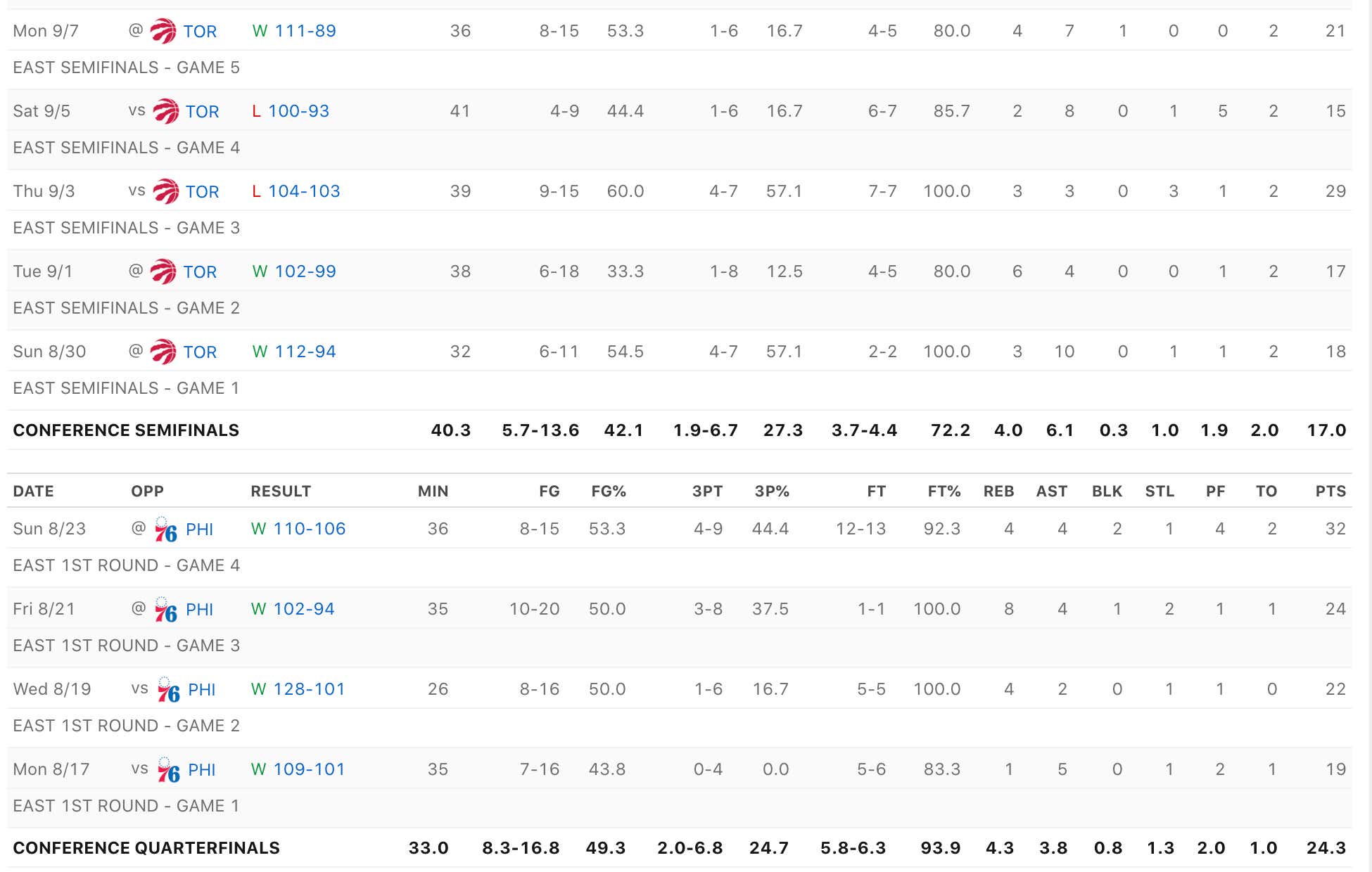 As you can see, those early season shooting slumps didn't really matter when it came time to the playoffs when he was healthy right? Who could complain about his 43%, 50%, 50%, 53%, 54.5%, 33%, 60%, 44%, 53% shooting in those first 9 games. The Raptors had to Box and 1 him for crying out loud. Now he wasn't perfect, he laid an egg in Game 6 (0.5 game) and then wasn't all that much better in Game 7 against TOR. He then struggled by his standards against the Heat, which we now know was partly due to him re-aggravating his knee injury.

But this is what confuses me so much about everyone freaking the fuck out. We just lived through these stretches last year. Ultimately, Kemba snapped out of the slump. He was able to do that while healthy, so why wouldn't that be the case this season? Kemba is a high volume streaky shooter, he has been his whole career. I'm sure Hornets fans will even remind you of stretches he had these dips while in Charlotte.

The encouraging piece is nothing we are seeing is physical like it was in the bubble. He's making sharp cuts off ball, and he's been able to get to his spots in the midrange. Just look at his most recent struggles against the Suns the other day.

Here we don't see Kemba struggling to get by his primary defender. We don't see him unable to get into areas where he's excelled throughout his career. He's just missing shots. That's mental, not physical. Even when it comes to his patented step back, we're seeing Kemba get clean looks off it that simply aren't dropping right now

It doesn't help that he keeps trying to bait officials into giving him that leaning shooting foul on threes, which he hasn't gotten all year and ultimately are tough shots that only magnify his struggles. It's the shit that happens when players are in a shooting slump. Now last night was a little different as we saw Kemba get blocked on a few drives/pullups, but with one coming against Gobert that's not exactly a huge red flag.

If this 10 game stretch we are currently living through was something we'd never seen before when it comes to Kemba, I could understand really freaking out. But that's simply not the case. These current struggles also mean absolutely nothing when it comes to Kemba's potential performance in a playoff series. That would be true even if he was lighting the league up. The only thing that truly matters is Kemba's health.

What makes his struggles a little more of an issue this time around is the Celts don't exactly have a huge margin of error. Not with Smart out and the games they've already had to deal with Covid issues in. It's a bad time for Kemba to have one of these 8-10 game slumps, nobody can argue that. You combine that with the overall team refusing to consistently play defense for 48 minutes, and things snowball.

But as history shows us, you'd be silly to jump ship on Kemba at this stage. His struggles aren't physical, which is the only thing that matters. The question now becomes if he can snap out of it in a similar fashion like he did last year. Nobody knows, but his body of work over the course of his career suggests that he's going to get back to making shots he's made his entire NBA career.

If he doesn't, the Celts are fucked. No two ways about it. But let's not pretend like this team didn't survive a couple of brutal Kemba Walker slumps, because the reality is we've seen this before and ultimately things were fine.