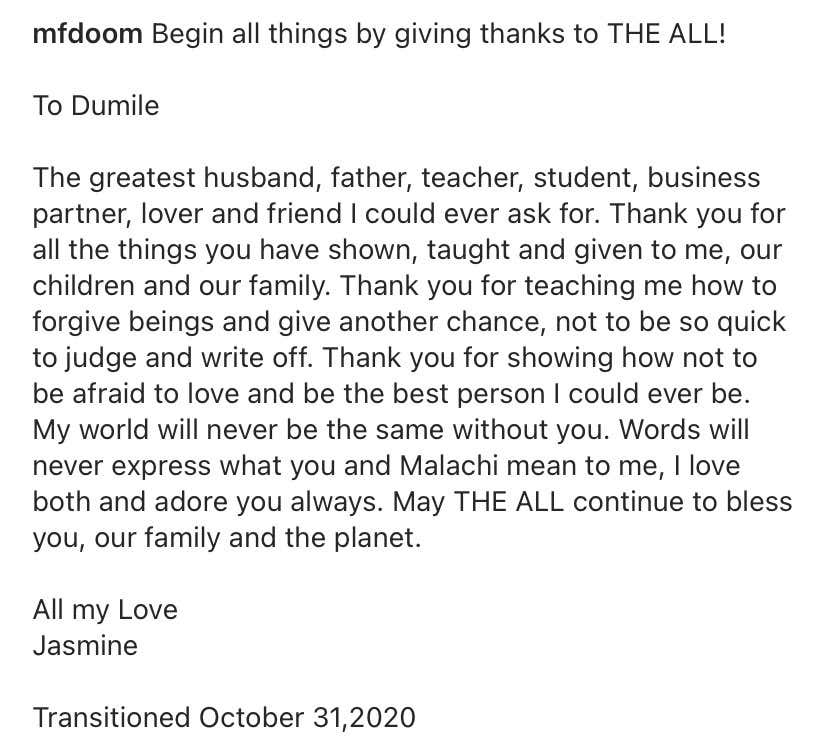 "The greatest husband, father, teacher, student, business partner, lover and friend I could ever ask for," DOOM's wife Jasmine revealed in the caption of an Instagram post depicting her late husband. "Thank you for all the things you have shown, taught and given to me, our children and our family. Thank you for teaching me how to forgive beings and give another chance, not to be so quick to judge and write off. Thank you for showing how not to be afraid to love and be the best person I could ever be."

The statement continues, "My world will never be the same without you. Words will never express what you and Malachi mean to me, I love both and adore you always. May THE ALL continue to bless you, our family and the planet."

Prior to his solo career, the masked legend got his start as Zev Love X in the hip-hop trio KMD alongside his younger brother DJ Subroc and Onyx, who replaced the original third member Rodan. Following Subroc's death and the group getting dropped from Elektra Records in 1993, KMD disbanded, and DOOM didn't return to the world of hip-hop until 1997, debuting a new name and masked look inspired by Marvel's Doctor Doom.

The influential rapper is responsible for some of the most beloved hip-hop albums of all-time, including Mm.. Food and Madvillainy with Madlib. While he hadn't released a solo album since 2009's Born Like This, he remained active in the decade that followed and released three separate collaborative efforts. Just earlier this month, BADBADNOTGOOD released a collaboration with DOOM entitled "The Chocolate Conquistadors."

I'm not going to sit here and pretend I was a huge MF Doom fan and this news devastated me. But is this incredibly sad that an insanely talented man, husband, and father passed away at 49? Absolutely.

This is undoubtedly CRUSHING news to a large group out there. Make no mistake, hardcore underground rap fans fucking adore MF Doom.

He is arguably the most respected rapper of the last 30 years by lyricists and other rappers.

He was eccentric and had his quirks, like donning a Dr. Doom mask, but his works speak for themselves.