Threw out this halfassed tweet today. Eddie and I were chillin' in the office and it was about 100 degrees. He looked at me and said, "it's hot as fuck in here, I need to get outside for some fresh air". Right before he said that, I thought the exact same thing to myself, so I said "yeah it is, I'm feeling queasy, let's go outside for a bit"

So we did. Ed posted up in the back alley with his folding chair thing that's become the Bears' good luck charm, and we sat around for a good 10 mins and yucked it up. It was a pleasant time; it's not often Eddie and I get 1v1 time like that. Love that kid.

Anyways, we kinda planted this picture a little bit. Not for any specific reason, but I told him I was taking it (mostly because of the folding chair) and said "just look candid", so he did and I did. Simple as that. Just a mundane, halfassed Monday afternoon tweet.

What I didn't think would happen was an internet evisceration of Eddie's shoes.

I haven't seen a beating like that since someone stuck a banana down my pants and turned a monkey loose!

I assume he wears them to the office frequently but have never noticed how beaten up they are. Red from Shawshank asked, "how often do you look at a person's shoes?" If my relationship with Eddie is a sufficient sample, I guess that answer is never. But Jesus Christ Eddie, for the love of God - go get a new pair of shoes bub. I mean look at these things!! 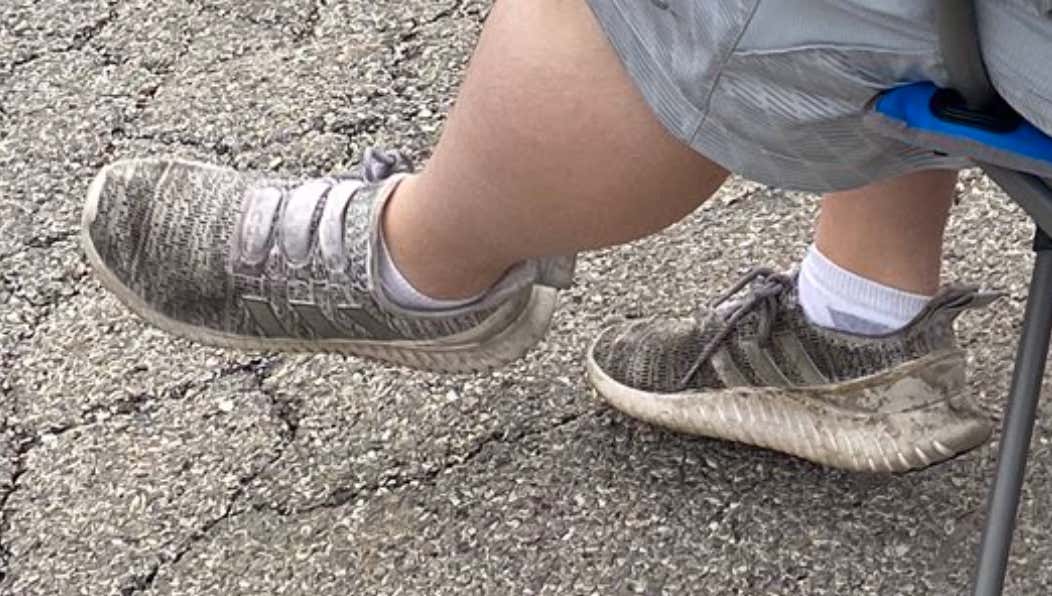 Are those half velcro shoes, half regular laced shoes? Are they used to cut the grass? Holy Hell Ed, if you're struggling that badly, just let me know. I can float ya $110 for a new pair of AF1's or something. I won't charge juice for 2 weeks then after that only 5% will be added each day I don't get my money back.

That, or maybe someone in the comment section or someone reading this blog will have a connection to a brand that can hook our guy up. He's the Marshall Faulk of our group - just get him the ball and let him do his thing. Can't be Marshall Faulk if you have shoes like that though.