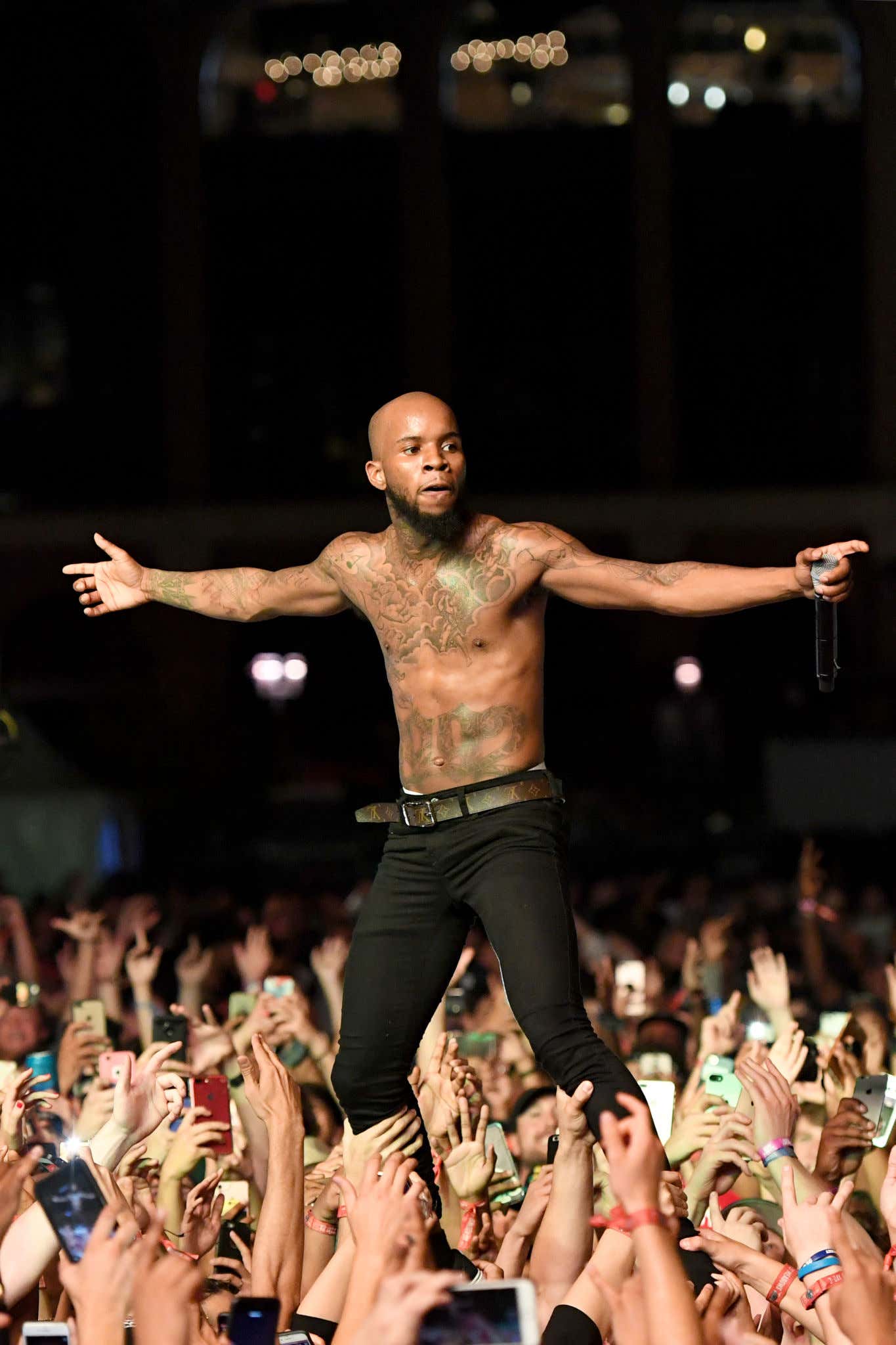 Tory Lanez…Tory Lanez had himself a NIGHT.  Tory Lanez. Wow. Here's what must have happened, is he woke up some time recently, pushed the two Tuesday 8s out of the way looking for his phone, rubbed his eyes crusted over with pussy and not enough sleep, and realized he was sick of doing this same thing every morning. He was ready to upgrade everything, from the 8s to the reliance on other bigger stars, the whatever album sales and mediocre clout. He was 28, he hadn't even been shot yet. He had to make a move fast.

And what's the top speed superhighway to (2020s version of it, airquotes are just assumed) fame?  That's right — a heel-turn worthy of a Bond Villain. Just get fuckin haaaaaatted, despised by the internet, make them feel it in their bones how much they'll spend on a party to celebrate your death.

And not since the Hulk Hogan leg drops on Savage and the black NWO tank at the end of the '96 Bash At The Beach has the world seen a heel-turn of this quality…….

I'm not sure he was ever liked enough to go heel, so this might be more of a heel-emergence. Doesn't really matter. The point remains, the man turns out to be a big piece of shit. Well not so big, but more on that later. First becoming the shit piece:

Tory Lanez snagged the literal creator of Hot Girl Summer and #1 female entertainer of the moment Megan Thee Stallion, started with the bad treatment and heartbreak stuff then ramped it up a bit, i guess, if you could call it "ramping up" when he allegedly fucking SHOT HER allegedly. With a gun!  Bullets, that came out of it! That is truly unique, new and never been done if it was since it's alleged. He actually could have stopped there, he was fucking HATED the necessary amount in like 30 minutes. But we didn't sell any albums yet.

So he stayed dead silent on all anything to do with Meg's health, no nothing, definitely not nice words. Until yesterday when he blasted out over every social that he would be breaking his silence, if he gets a good crowd to meet him at 9 PM on the internet. 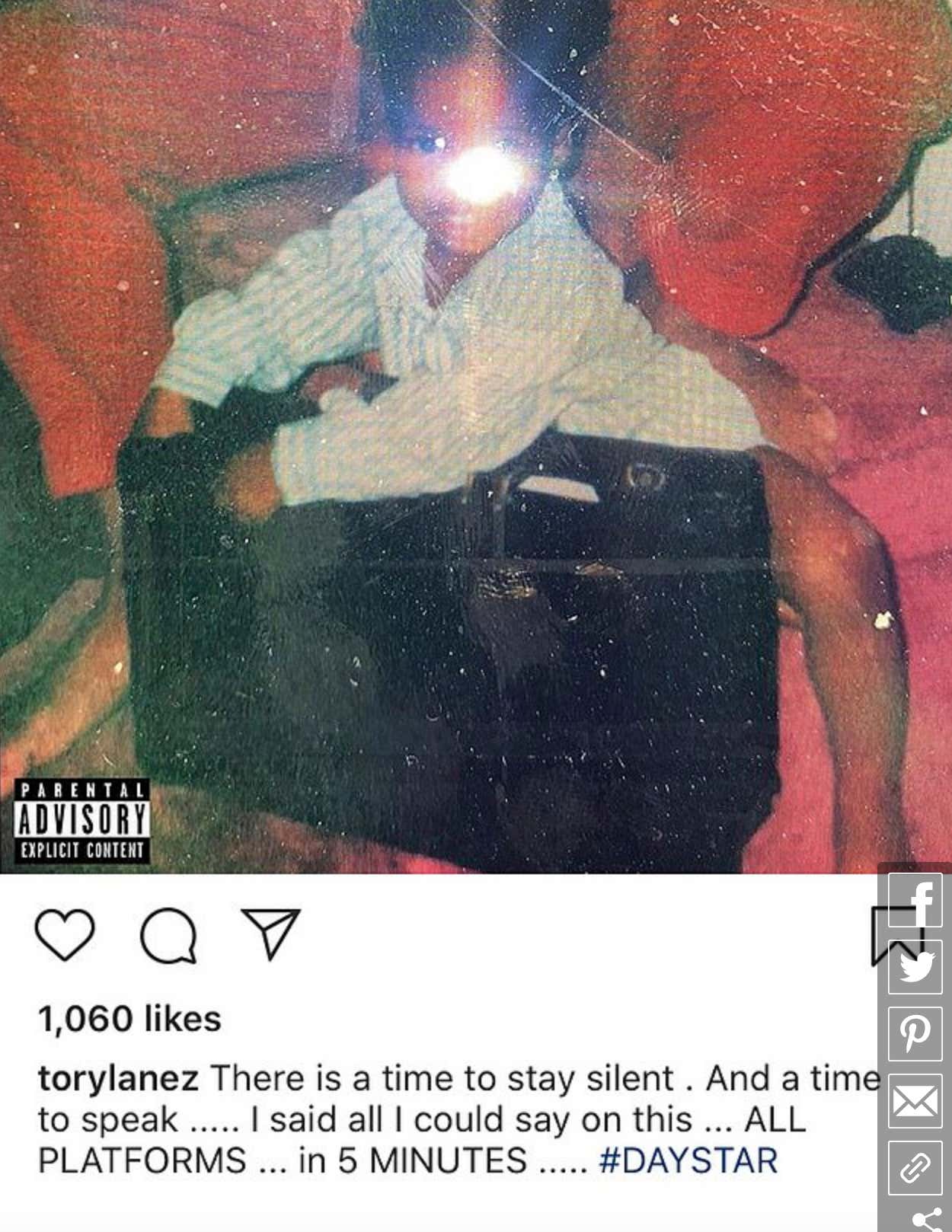 He was basically promoting the event of saying he wished Miss Thee Stallion well but on account of his lawyers blah blah, something lame and predictable. SIIKE! He got a bag like an alpha rapper. He had hyped it up to get all eyes on him so he could drop his new SURPRISE album, on sale now! Featuring the soon to be hit songs…. where I victim shame and blame, or just say she's lying on me, " I didn't shoot the girl she's jealous", and [CLOUT CHEAT MODE DETECTED] insinuate this is all over you fucking Kylie Jenner.  Yes he sprinkled lyrics putting everything on Meg throughout the album, and he was so lost to the game he evoked a Kardashian with a smile on his face!

Me and Kylie still off in the pool
We was chillin', kickin' sh**, was cool
Both of us didn't know you was trippin'
Even though I got a crush on Kylie, I woulda left with you if I knew you was dipping for the simple reason
You invited me but I can't act like shawty didn't excite me
I had took a wrong turn that-night

Incredible. You have to respect how much you don't respect him right now right? Don't you just want to rip his face off with your hands and check his songs to see if you know him and oh this one's a bop! Next thing you know you're streaming and streaming and hitting the limits that dump pennies into the accounts and the whole thing just worked again, Tory has a nickname and even a high five from Drake instead of the usual soft smack on the cheek by his penis.

Oh maybe I need to add this, I'm not saying I think he's lying saying nothing happened. I don't think he's not lying either, I haven't even thought about it or cared. For this it doesn't matter, the Hives and mobs on Twitter etc stopped caring about shit like innocence before proven guilty a decade ago. Whoever shot who in whoever's foot, Tory Lanez has made himself hated for a good while.

Because if there's one thing we love to do, it's fucking hate people on the internet so much we can fucking taste it and wouldn't dare NOT follow them and make sure our eyes are constantly on this thing we hate.

If my apartment was flooding right now and the water was up to my chest and rising, and my cousin was staying over and he brought the great white sharks he uses as therapy pets and they just broke out of their cages, or anything like that, it wouldn't matter, nothing would stop me from including the PS that Tory Lanez is 5'3" tall.

Did you see that or did I skim so fast I made it up?

I didn't make it down that far in the blog.

Here I'll ask it in question form this time so you can retain it better:

How tall is Tory Lanez?

Isn't that fact fun? And it's from a source with much more reliable record keeping: the police, arresting Mr. 5 Foot 3 Daystar (also that, his name is Daystar) for what we just talked about, the alleged foot shooting of the Horse girl from the pussy video.

And by the way, Lanez stacks up bodies like a walking morgue. I don't want to hear from any of these women who throw shade at my short kings, not when they're thirsty over a man who gets worked on the block by Kevin Hart.

Ok come on an editor should have cut that Hogan Goes NWO scenario, that almost impossibly disrespectful comparison. Tory Lanez as The Hulkster? One is a legend, the GOAT, the hero who slayed the mythical trash dumpster of a website for being unethical perverts doing perv things. The other is Tory Lanez who, to be fair, is most definitely, confirmed the cause of at least one, if not 4 or 5 smiley-face-with-sunglasses emojis from Uncle Chaps.

Since it's in my wrestling wheelhouse of 1996, I'm re-doing the '96 Bash At The Beach comparison to accurately and fairly represent Tory Lanez….

Ok this is it: Tory is John Tenta winning the Carson City Silver Dollar Match against Big Bubba then taking silver dollars out of the sock and putting them over Bubba's eyes. I mean, it was the second match of the night and was described during a live blog by 411Mania as "slow, dull, plodding, with a dumb gimmick and even dumber setup for the gimmick" (they put the sock too high, like at a comically impossible height) — and the star power was questionable seeing as Earthquake was in it, but not as Earthquake, as John Tenta, the guy whose identity you steal to become a life insurance salesman. BUT, if the glass is half full for you, that's a pretty good gig, an official match, your name on the card of the major event everyone will remember for the rest of time (just not for you, because of a bigger star than you.)

Not a bad comparison for Tory Lanez — he's always been right there on the brink of star power, not quite hitting the smash singles consistently,  but always singing hooks on them, and when he hits you can practically feel the pregnancy rate skyrocket. Not just with the music, the ladies love the man himself. I mean you don't make FIVE mix tapes named Chix Tape if you don't fuck chicks. So Tory Lanez might not be a "Hulk In His Prime" in the hip hop world, but he is not a nobody. Far from it. The little fella has got himself a nice little career, he's sung the choruses on some big bops, he's got Say It and Luv and probably at least 1 song on your sex playlist — finally, more of a fun fact than an accolade, but if you squint, you can see there's a small indent on his forehead still from when Drake dropped his nuts there on Summer 16. Drake don't diss nobodies. So Tory Lanez, he may not be the "Hulk-in-'96" of the hip hop game, but he's far from a nobody.