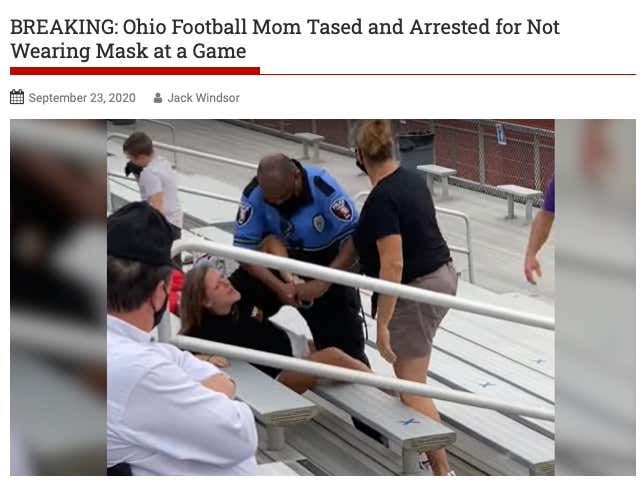 Alecia Kitts drove an hour and a half from Marietta to Logan, Ohio to watch her son’s seventh grade football game.

In the first quarter she was approached by an officer from the Logan Police Department because she was not wearing a mask.

The video below shows the three-minute encounter between Kitts and the officer.

Ahh, what a refreshing sight to see on this fine Thursday morning. Some good old fashioned southeastern Ohio trash to remind you that your life could be worse. I mean, what are we even doing here? So the NFL decides to go with the million dollars of fines strategy for not wearing a mask at football games, while the Logan Police Department is going immediately with the taser. Got it. Different strokes for different folks, I guess. But there has to be a middle ground here that we can meet in. Maybe, and I know I'm old school, but maybe you could just issue a ticket? I think that sounds reasonable -- although I must admit Roger Goodell implementing a first offense fine, second offense public tasing penalty for head coaches would make the week 3 games a whole lot more interesting for a couple people.

But honestly, as much as having to pull out the electroshock machine on a mother at a 7th grade football game might be a BIT of an overreaction, I still gotta side against her. Like, ma'am, how can you not just wear a mask? This pandemic didn't start a couple days ago. In fact, it started six months ago. And you've had to have a mask on in every inch of Ohio since like mid-July. So for you to think that you would drive an hour and a half to your son's 7th grade football game without one, you're a crazy person. I don't care if you just drove 8 hours, just put a mask on and be a normal person.

Could you imagine being her kid on the field? I can tell you that 12-year-old Ohio's Tate would've been crying like a baby watching his mom get cuffed, tased, and taken away. But maybe this kid used it as motivation and ran harder. Kids are tougher nowadays. Maybe he set the middle school state record for all-purpose yards, I don't know. I wish I did know, but the reporter didn't even include the final score of the game. Poor journalism!