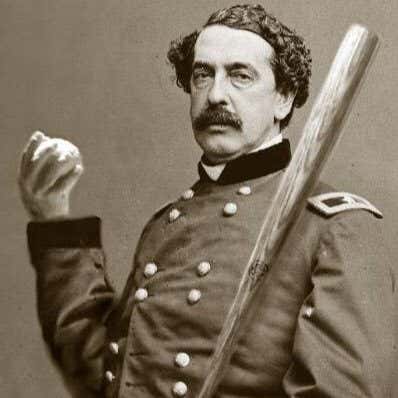 According to legend, Abner Doubleday, a student at the U.S. Military Academy, invents a new game while on vacation in the pastoral town of Cooperstown, New York. The new sport that Doubleday plays with his friends is baseball. The legend was based on an eye-witness account given to the Mills Commission, which was looking to find the story behind the creation of baseball. In truth, baseball evolved from older sports like rounders and cricket.

Looking to create a story behind the beginnings of baseball, former National League president Abraham G. Mills created a commission in 1905. The story of baseball’s beginnings is complicated. Several sports were a ball was struck with a stick that had been played for years. Cricket, rounders, and a game in New England called town ball were all responsible for providing the roots to baseball. The first known game of baseball was played by the group of New York firemen known as the Knickerbocker Club. They would sail over to Hoboken and play their game. Among them was Alexander Cartwright, who invented the baseball diamond in 1845. For the Mills Commission, the truth of the game’s origins was too mundane, so a search for a pastoral beginning to baseball led to the creation of the Doubleday Myth.

Abner Doubleday was born on June 26, 1819, in Ballston Spa, New York. The son of a congressman, he was named after his grandfather who in the Revolutionary War. His maternal grandfather Thomas Donnelly was also in the War for Independence as a messenger to George Washington. Abner Doubleday attended High School in Cooperstown while living with his uncle. He would attend the U.S. Military Academy in West Point. After graduating, Doubleday would become a General and a war hero in the Union Army. He famously fired the first shot at Fort Sumter at the start of the Civil War. He later fought in the battle of Gettysburg. While at West Point, Doubleday would return to Cooperstown when given time off. This opened the door to the Mills Commission to create a good folk hero type origin for baseball.

The Doubleday Myth would lead to the creation of the Baseball Hall of Fame in Cooperstown, which opened on the 100th anniversary of the alleged date that Doubleday came up with the game, June 12, 1939.  Abner Doubleday died in 1893, a decade before the myth was created. A stadium behind the Hall of Fame bears his name, though he has never been elected to the Hall of Fame as he had no real connection with baseball. The Doubleday family later became publishing magnates. A cousin of Abner Doubleday named Nelson would purchase the New York Mets in 1980. Nelson Doubleday owned a majority stake in the Mets until he was bought out by his partner Fred Wilpon in 2002.