This was originally going to be a Quarantine Mailbag but this question deserved its own blog. Big thanks to Zack L. So here it is. 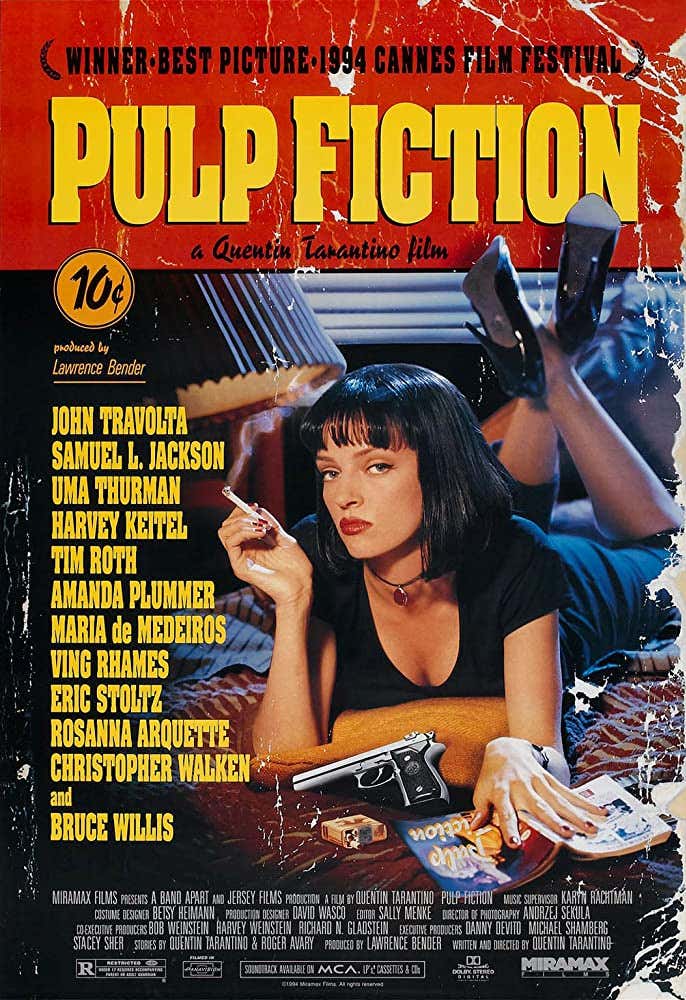 Could we get a power rankings of the main characters in Pulp Fiction? We’ll say everyone whose name is on the poster counts as a main character.

I hate sports power rankings but I jumped all over this. Here are the power rankings for the twelve characters played by the actors appearing in yellow on the left (I'm not using Quentin Tarantino's henpecked Jimmie because QT's not listed as an actor on the poster. Plus that guy fucking sucked.)

12. Lance (Eric Stoltz). Heroin dealer. So, yeah, easy call here. He did help Vince with Mia but it's not like he had a choice when a hitman crashed into his house with a gangster's overdosed girlfriend.

11. Jody (Rosanna Arquette). Surly, heavily-pierced girlfriend of a junk dealer. Likely mooches his shit. Made saving Mia more stressful than it needed to be. On the plus side, she does hang out with one of THE COMMITMENTS.

10. Mia Wallace (Uma Thurman). Look I love Uma but I didn't write the fucking screenplay. Mia received a foot massage from another man who wasn't a masseuse or her husband. She stole drugs off of a guy who was doing a weird favor for her gangster husband. Then she ODs on the guy's watch and needs him to save her life by stabbing her in the heart with adrenaline. Total buzzkill. Not to mention, she has shitty jokes. And her pilot sucked. But sexy dancer.

9. Honey Bunny (Amanda Plummer). Doesn't have what it takes to be a robber at the end of the day. You just can't break down like that when the shit hits the fan. Also, staring into the server's face so she gets an even better look at your distinct features? Such a rookie move. But I did like her commanding the room from the jump.

8. Pumpkin (Tim Roth). What moron picks a packed diner to rob with no face covering whatsoever? Definitely gonna get caught by the close of business. Shitty at French. Definitely not bank job material. Should count his blessings and live an honest life after the way the attempted diner robbery transpired.

7. Vincent Vega (John Travolta). This is the role that revived Travolta's then-moribund career and made him a star again. Vega ends up dead on the shitter because he was careless with his weapon (from his once-adopted son, to boot). Tough look for a wise guy. Puts himself and Jules in hot water because of careless weapon usage when he shoots Marvin in the face. How the fuck was this guy a pro hitman? Did gift us with some great dialogue but not very cultured, can be a little abrasive, and is always itchy for a fight (see: Butch, The Wolf, Jules). Did save Mia's life but she was only able to steal his heroin because he was so fucking careless with it. Reads on the shitter in a diner like a fucking weirdo. Has more dance moves than he showed.

6. Fabienne (Maria de Medeiros). A true ride-or-die gal (or possibly just oblivious). Self-assured and self-confident. Has a cute accent. Likes receiving oral pleasure. Will kiss it. Caused flashbacks for every boyfriend in the history the world when she forgot Butch's watch even after he emphasized its importance. Has a belly like Madonna in the "Lucky Star" video. Helped give us this epic exchange.

5. Marsellus Wallace (Ving Rhames). Starts the movie as a local crime kingpin but ends it on a pretty tough note. However, he will survive, remain in power, and at least be able to get some fierce revenge (read: torture) on Zed and Maynard. Marsellus dripped menace before we even laid eyes on based on the conversation between Jules and Vincent. When Rhames does show up, he owns the screen each time and conveys the vibe of a guy you don't mess with (at least until he ends up with a ball-gag in his mouth).

4. Butch Coolidge (Bruce Willis). People forget Willis was on an absolute fucking cooler before getting a career revival and new appreciation for his talent when he crushed it as the ultimately heroic Butch. After the huge hit that was DIE HARD 2, Willis had more stinkers than a diaper pail: LOOK WHO'S TALKING TOO, THE BONFIRE OF THE VANITIES, MORTAL THOUGHTS, HUDSON HAWK. BILLY BATHGATE, DEATH BECOMES HER, STRIKING DISTANCE. Holy yikes. His portrayal of Butch no doubt changed the trajectory of his legendary career. He does double-cross Marsellus after agreeing to take a dive in his fight. And yes, he does run Marsellus over while he's crossing the street. But he also goes back to save his life at great personal risk to himself. He could've just left that pawn shop and never worried about Marsellus Wallace or his repercussions ever again. Instead, he heads back into that dungeon of horrors with just a Samurai sword vs. armed redneck rapists to rescue a guy not very happy with him right now. Wallace regognizes the gesture and they come to a very reasonable gentlemen's agreement (of course, that was an easy 'yes' for Butch because he was already leaving town with all that money waiting for him).

3. Captain Koons (Christopher Walken). A brief but unforgettable and essential role. Was a P.O.W. in Vietnam for several years. Really took one for the Coolidge family. Oh, and fucking Walken nearly steals the movie with this incredible talk to young Butch. After about three minutes of serious talk about the history of The Gold Watch that Walken/Koons enraptures the audience/boy with, the dialogue suddenly makes a Tarantino U-turn to really hammer home the sacrifices made to have that watch in the room right then.

2. The Wolf (Harvey Keitel). When you're a fixer for gangsters who can also tell hired assassins to "clean the fucking car", then you're a bad-ass. Keitel is only is this movie for a few brief scenes but his scary gravitas in these pivotal moments lingers much longer. Jimmie goes from talking tough to Jules and Vince to basically groveling to The Wolf. Jules wants nothing to do with him. Vince bristles at his curtness but acquieses in the end. The two guys we've already seen stone kill folks are suddenly deferential. Marsellus Wallace has him on speed-dial. And what the hell are you doing in a packed hotel room at breakfast time wearing a tuxedo? That was some shady shit, too.

1. Jules Winnfield (Samuel L. Jackson). There are certain roles that are so well done and performances so perfect, they take an actor to a whole other, well-deserved level and lead to a career that otherwise might not have happened as it did. Samuel L. Jackson as Jules is such an example. After a handful of small but memorable roles, QT had the perfect role for Jackson at the perfect time. And Jackson smashed it out of the fucking park, earning an Oscar nom for Best Supporting. Winner Martin Landau was great as Bela Lugosi in ED WOOD but Jackson's performance was downright electrifying, magically turning the word "Motherfucker" into a beautiful symphony. Equal parts menacing, cool, and charming, Winnfield starts the movie as a hired gun but is really the only character who changes for the better. Easily the most quotable character in the film, by far. Knows a great burger. He has an epiphany after Fourth Man in the bathroom proves to be a pathetic shot. Even though the bullet holes were already there (the error actually appears in the trailer, too).

(Yes, I just ended this blog with a Vine.)