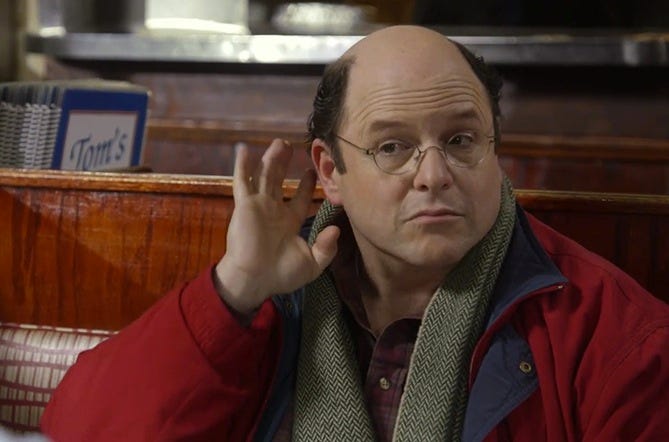 Vanity Fair - Thanks to a flurry of in-depth reporting around Seinfeld’s 25th anniversary, we know about one of the sitcom’s more controversial unaired scripts: “The Bet,” a.k.a. “The Gun.” Both star Julia Louis-Dreyfus and the episode’s would-be director Tom Cherones balked at one particularly dark joke that had Elaine pointing a gun at her head and making a Kennedy assassination joke.

Suffice it to say, the episode never made it to air. But due to a recent article in the New York Post—we now know about a second controversial script that never saw the light of day. That episode was all about race.

NBC censors pretty much let Jerry Seinfeld and Larry David get away with whatever they wanted on Seinfeld. One of the few exceptions was a proposed episode in which George got in trouble for observing, “You know, I have never seen a black person order a salad.”

What made the joke so touchy for NBC, when much edgier racial comedy has aired before and since? Many, including critic David Free, have argued that Seinfeld’s all-white cast and largely white writing staff were “poorly positioned to defy America’s ultimate no-no.” The seminal sitcom only occasionally dabbled in racial humor, and proved a lightning rod when it did. In 1998, NBC apologized for an episode that centered on the Puerto Rican Day Parade.

But to this day, Seinfeld writer Larry Charles, who wrote both the gun and the salad episode, argues that no subject should be off the table when it comes to comedy. In reference to the gun episode, he told Screencrush:

If it were on Louie, you wouldn’t think twice about it … I think Louie has proven and Curb Your Enthusiasm has proven as well that those subjects are worthy of exploration and comedy. I reject the idea that certain subjects should not be touched upon.

Now that I know this is out there all I can think about is how badly I need to see this script come to life.  I don’t care how much you have to pay everyone or what their schedules are, you owe it to the fans of Seinfeld and non-PC humor to get the cast back and film George asking why black people don’t eat salads.  I mean it’s true.  I’ve never seen a black person order a salad either.  Observational humor at its finest.

Coincidentally this story contains two of the major things that I judge a person on: if they think harmless jokes about race/sex/religion are offensive and if they don’t like Seinfeld.  Those are two very solid immediate judges of character.  If you think “you know, I have never seen a black person order a salad” is too racist to air, or if you don’t think Seinfeld is funny, I don’t like you.