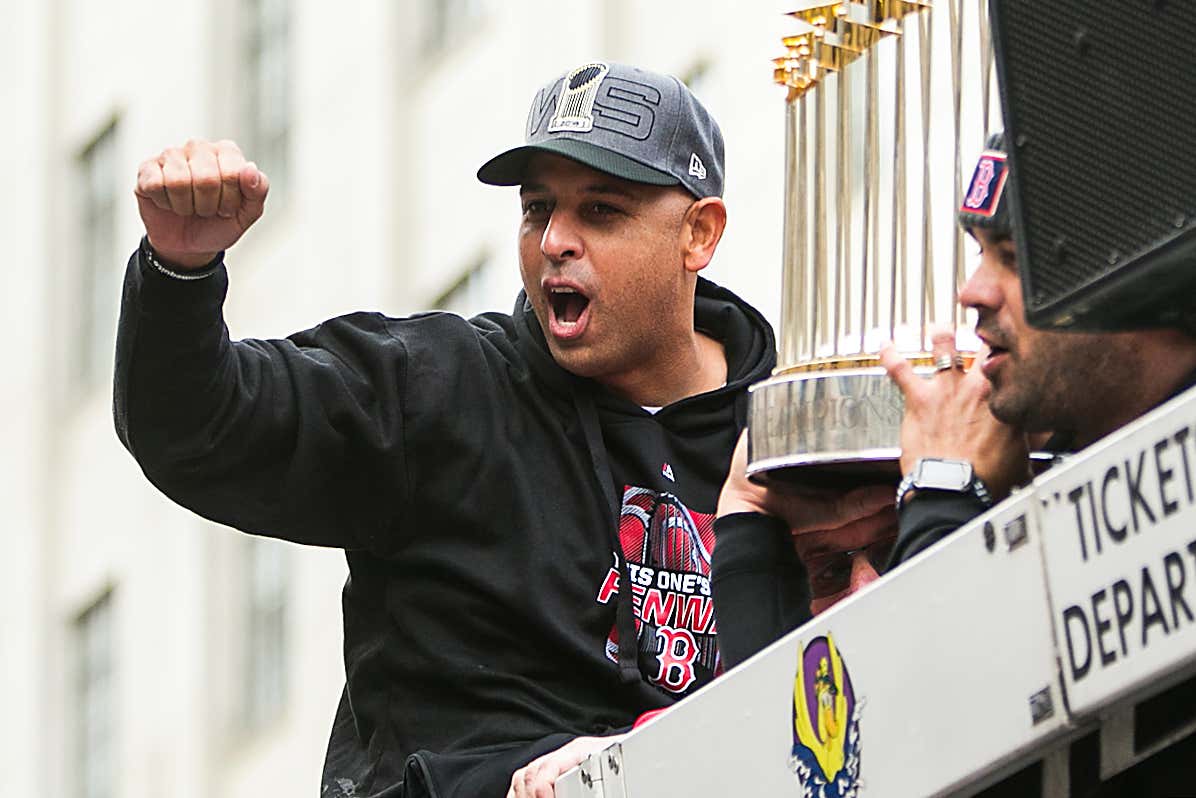 The 2018 Boston Red Sox have been completely exonerated of any serious wrongdoing, according to that piece of shit rat Evan Drellich.

Major League Baseball’s ruling on the Boston Red Sox’s illegal sign stealing in 2018 determined the primary culprit was not the front office, manager Alex Cora or the players, but the team’s video replay system operator.

The league, in findings that will be released Wednesday afternoon, suspended the operator, J.T. Watkins, and docked the Red Sox a second-round pick in the 2020 draft. It also suspended Cora through the conclusion of the 2020 postseason, but only for his conduct as Astros bench coach in 2017, not as Red Sox manager in ’18, when the team won 108 games and the World Series.

Following a January report from The Athletic on the Red Sox’s conduct, Commissioner Rob Manfred found that Watkins, on at least some occasions during the 2018 regular season, illegally utilized game feeds in the replay room to help players during games — an undertaking less egregious than the Astros’ famed 2017 sign-stealing scheme.

The league did not find that Boston’s impermissible conduct continued during the 2018 postseason or 2019 regular season.

But with the Red Sox, the league essentially determined that Watkins acted as a rogue employee. Manfred absolved Cora and his coaches from responsibility and found the team’s front office effectively communicated baseball’s sign-stealing rules to non-player staff.

“I do not find that then-Manager Alex Cora, the Red Sox coaching staff, the Red Sox front office, or most of the players on the 2018 Red Sox knew or should have known that Watkins was utilizing in-game video to update the information that he had learned from his pregame analysis,” Manfred wrote in Wednesday’s report. “Communication of these violations was episodic and isolated to Watkins and a limited number of Red Sox players only.”

I've said this a million times, but it's worth repeating. The only reason why we're talking about the Red Sox right now is because they won the World Series and Evan Drellich worked in Boston for several years. Guess where else he worked! Houston. If Drellich worked in LA, then this story is about the Dodgers. If he worked in Dallas, then it's about the Rangers. It's juicier because the Red Sox won the World Series, and there were more sources to work with because he worked in that market. That's it. And the league found that the Red Sox weren't using the replay room in the postseason, so the narrative that they cheated in the postseason is objectively false. Just didn't happen.

You know what did happen, though? A shitload of other teams using the replay room to decode signs. We've been living in the Replay Era since 2015 and nobody knew it. It's just one of those things where other people aren't ratting out other teams for doing it because they were doing it, too. Now nobody can do it, which is for the best. If you wanna sit there and act like the Red Sox were some rogue team that was using the video replay room to decode signs, then not only are you flat out wrong, but you're also an idiot.

The original Athletic report said that the Yankees were using the replay room to steal signs for several years, but they stopped because the league said please and then trusted that they did even though there were no league officials around in 2018 to confirm that they actually did stop. Nobody likes to talk about that, though, for some reason.

Anyways, breaking news: Alex Cora is coming back in 2021. His suspension was only for what went on in Houston. MLB couldn't find a single thing he did wrong with the Red Sox in 2018, so there's no reason why he shouldn't be on the top step of that dugout on Opening Day 2021. Next to Mookie Betts, who will also be coming back in 2021.

This is great news. Cora has been completely absolved of any wrongdoing, so the Red Sox have the best manager in the league back next year, and a little slap on the wrist with the second round draft pick was only because the Red Sox were dumb enough to try something else after Apple Watch Gate in 2017. If the Apple Watch incident never happened, then whatever the Red Sox were accused of doing in 2018 gets a warning. They already used up their warning for a minor infraction. In terms of comparing what the Astros were doing to what the Red Sox (and many other teams who won't be investigated because Drellich didn't work in that market) were doing, we're talking about comparing the Texas Chainsaw Massacre to a pillow fight.

I can't believe the report took this fucking long to put out there, by the way. Or, I guess maybe I can? I'd be a little embarrassed, too, if I took all this time trying to find a smoking gun that simply never existed. Then, you've gotta put your tail between your legs and let the world know that it wasn't even remotely close to as bad as the internet wanted it to be. They got a little taste of that 2017 Astros blood and wanted to keep the champion-shaming going. Sorry, folks. You'll have to stick to your played out Astros jokes, because there's nothin' to see here.