The race, which started early on April 4, was organized by Personal Peak Endurance Coaching and Canadian ultrarunner and treadmill-running world record-holder Dave Proctor.

Proctor was planning a Trans-Canadian speed record for May, and his crew was going to be made up of the Personal Peak team. With the coronavirus outbreak, however, he had to cancel the attempt. Proctor spent months working towards the Trans-Canadian record, and instead of letting his fitness go to waste, he decided to use it for a virtual race.

Personal Peak organized the Quarantine Backyard Ultra and sent invitations to the world’s best ultrarunners. The event was open to non-elites, as well, free of charge.

So what's the format for this race?

Backyard ultramarathons use a “last runner standing” format. All competitors have one hour to run 6.706K (4.16miles). Once complete, they have the remainder of the hour to relax, fuel, go to the bathroom or do anything else they need. At the end of the hour, anyone who didn’t make it back in time gets a DNF, and all those who did make it continue onto their next lap. The last person running is the winner.

And now as I publish this around 2:30pm ET on April 6th only two runners remain. Radek Brunner (Czech Republic) and Mike Wardian (USA - Arlington, VA) have been going since 9am Saturday morning with no sleep and no sign of slowing. 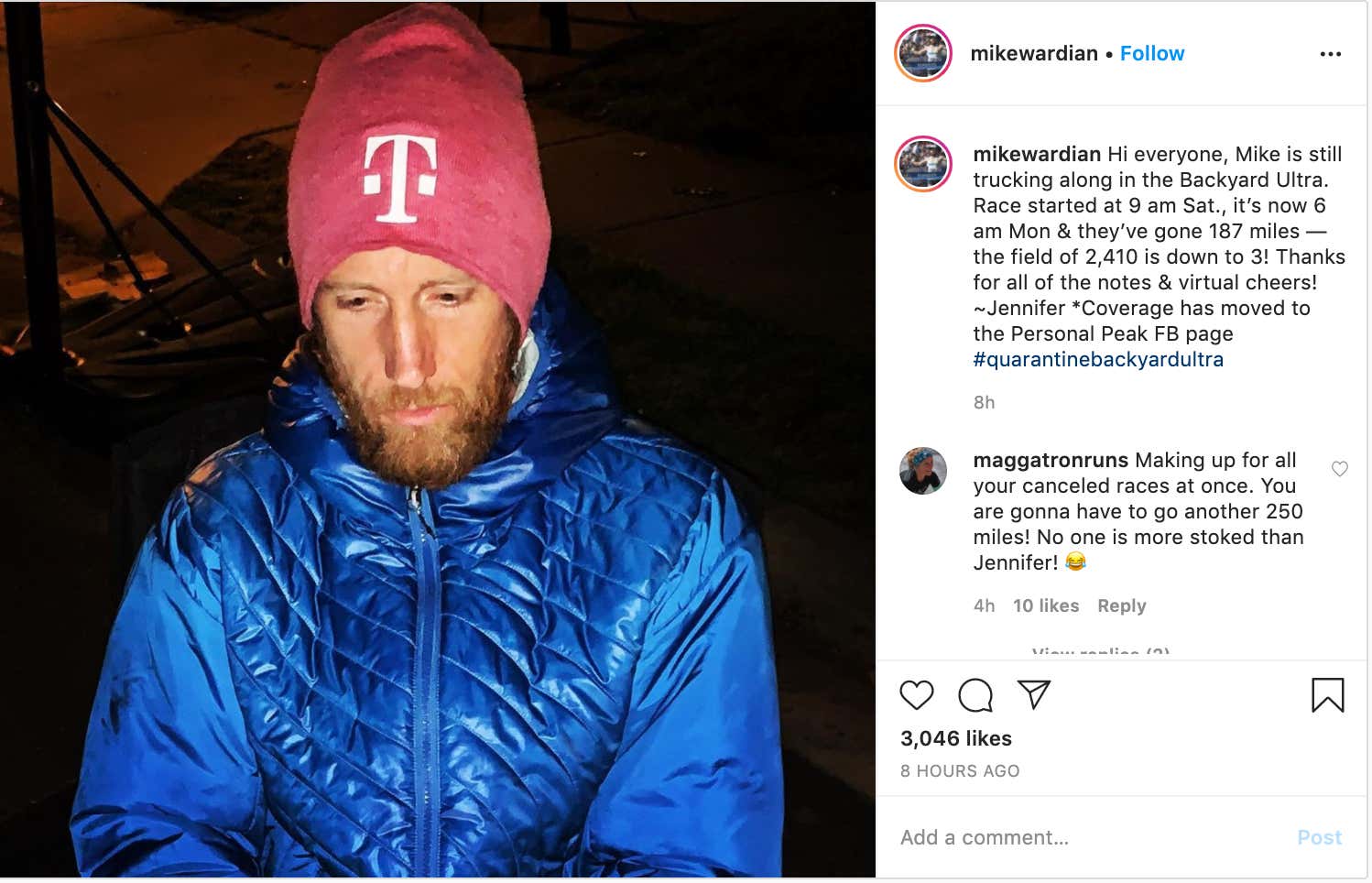 The "anyone can join this race" thing is how I came to learn of it via a bar owner named Dan at Ohio State. His friend gave it a whirl for the hell of it & dropped out, and then he hit me up because he thought I might think it was neat. (He was right!) So big shoutout to Oldfield's North Fourth Tavern at Ohio State for bringing this to my attention as I quietly look past the 'sup. 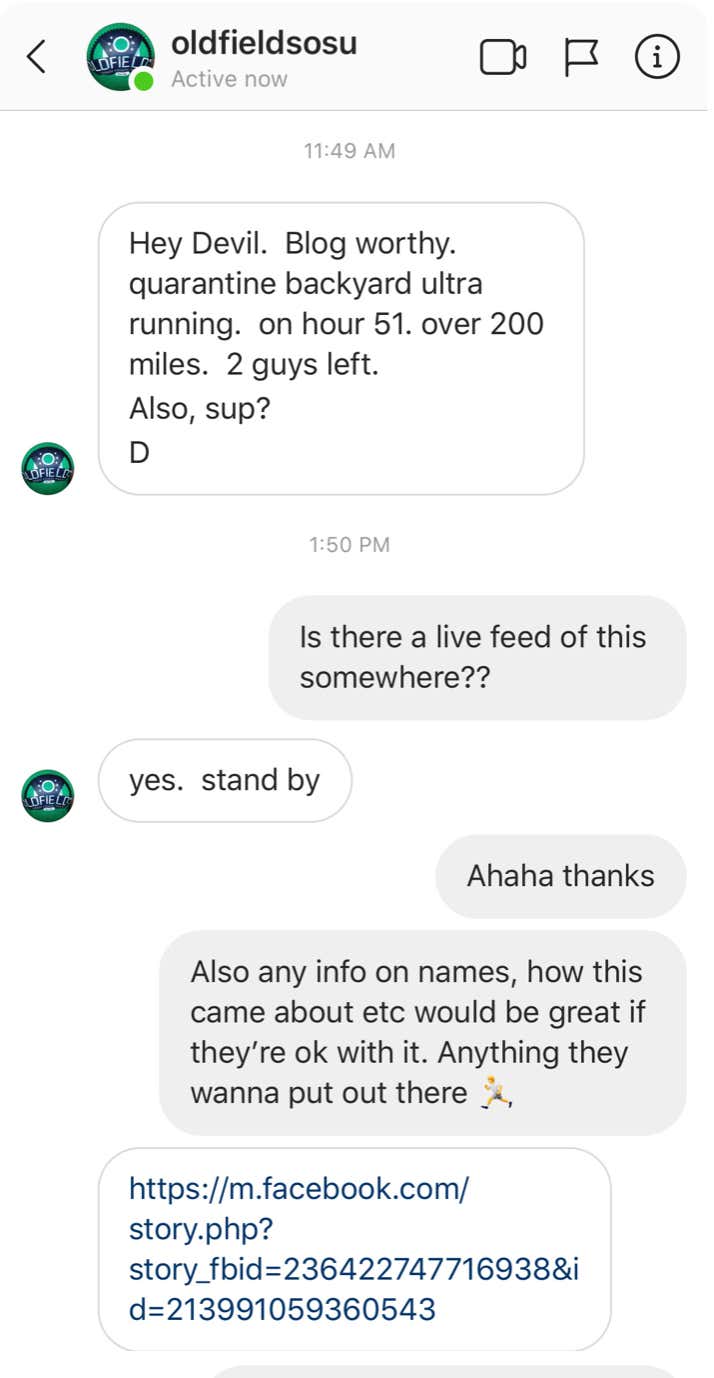 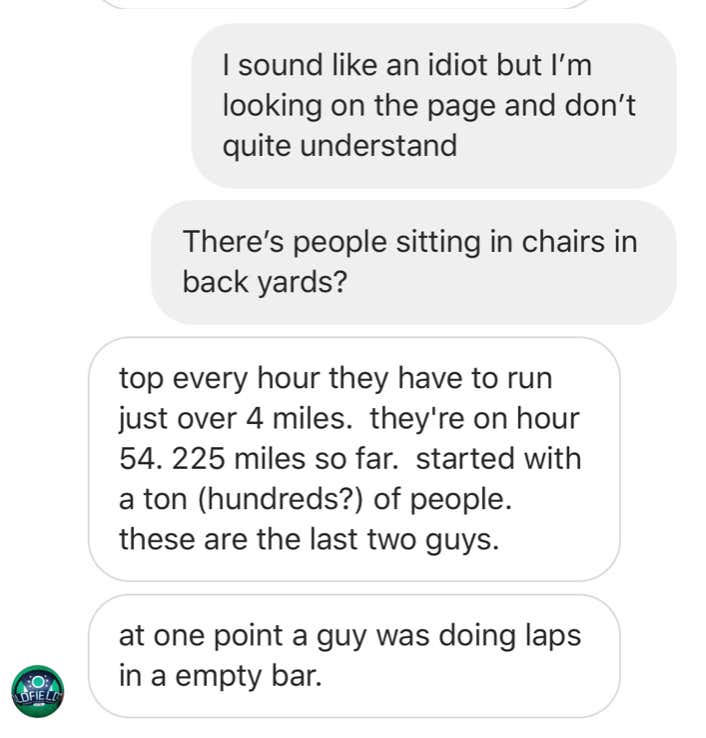 Pretty cool that Personal Peak has come up with a way to entertain in a way slightly healthier than me housing chardonnay on a livestream.

By the way, if you're in the Ohio State area Oldfield's is still doing to-go beer & delivery. Hit 'em up and maybe you'll get to see Dan dash by your door with brews.

PS: I'm probably going to regret this but if you have any hot info/interesting stuff happening in your neighborhood, go on ahead & slide all up in my DMs.