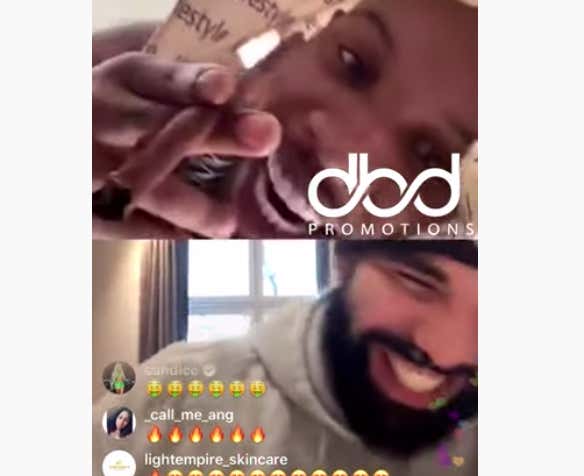 Source - The power of Drake apparently cannot be underestimated, as it has been reported that his surprise appearance on Tory Lanez's Quarantine Radio, which garnered a whopping 315,000 viewers at one point, helped break a new IG live record for the most viewers in one session.

During a standard "episode" of Quarantine Radio, a twerk contest would usually break out following the celebrity guest appearance, in which fans request to join the live stream and compete for the non-existent trophy. However, on Tuesday's Quarantine Radio session, Tory surprised everyone with an appearance from one of his most high-profile guests to date, after fans had repeatedly begged him to invite Drake onto the "show."

Almost immediately after Drake joined the livestream, the number of viewers began to rise exponentially. At one point, there were up to 315,000 viewers, which, according to DJ Akademiks, sets a new IG live record.

According to Uproxx, the previous record for any user was held by Taylor Swift, who raked in over 150,000 viewers on one of her IG live sessions.

And because you came here for twerkers, here are a few videos of that...

What a world. I'm not sure what these ladies get for winning, but they definitely got some exposure. Can't wait until Cardi jumps on and takes this thing to the next level. Congrats, Drake! I'll be watching tonight.