GET YOU A HEAD COACH/CEO THAT CAN DO BOTH!

What a week for Barstool and what a BEAUTY of a day north of the border on Saturday folks. And specifically for Team Barstool, who entered this leg of the tournament (0-2-1) but defied all the odds, hockey gods and crevice filled ice to go (1-2) in Ontario and (1-4-1) overall.

Now NO one thought they could go up to Canada and defeat some of the purest pond hockey competition possible... Aside from newly installed Head Coach Erika Nardini of course. Hail to her and free agent pickup Kelly Babstock for helping make history possible, just another example of the old adage HOCKEY IS FOR EVERYONE

Here's the full recap of the day up on Lake Muskoka, HUGE thanks to all the Stoolies that came out in Canada and New Hampshire for this, getting to mix it up with the crowd was the best part of all. Also the keep an eye out for the 24/7 episode this week, that should show the scoring error at the end of Game 1 that absolutely stole a win from (*2-1) Team Barstool...

Festivities started Friday with a fireworks party on the lake plus an impromptu rendition of "O Canada!"

But the puck party REALLY started when Muskoka's town crier Bruce C. Kruger walked in, dragging a wrench across the ice that nearly collapsed us all into bolivian 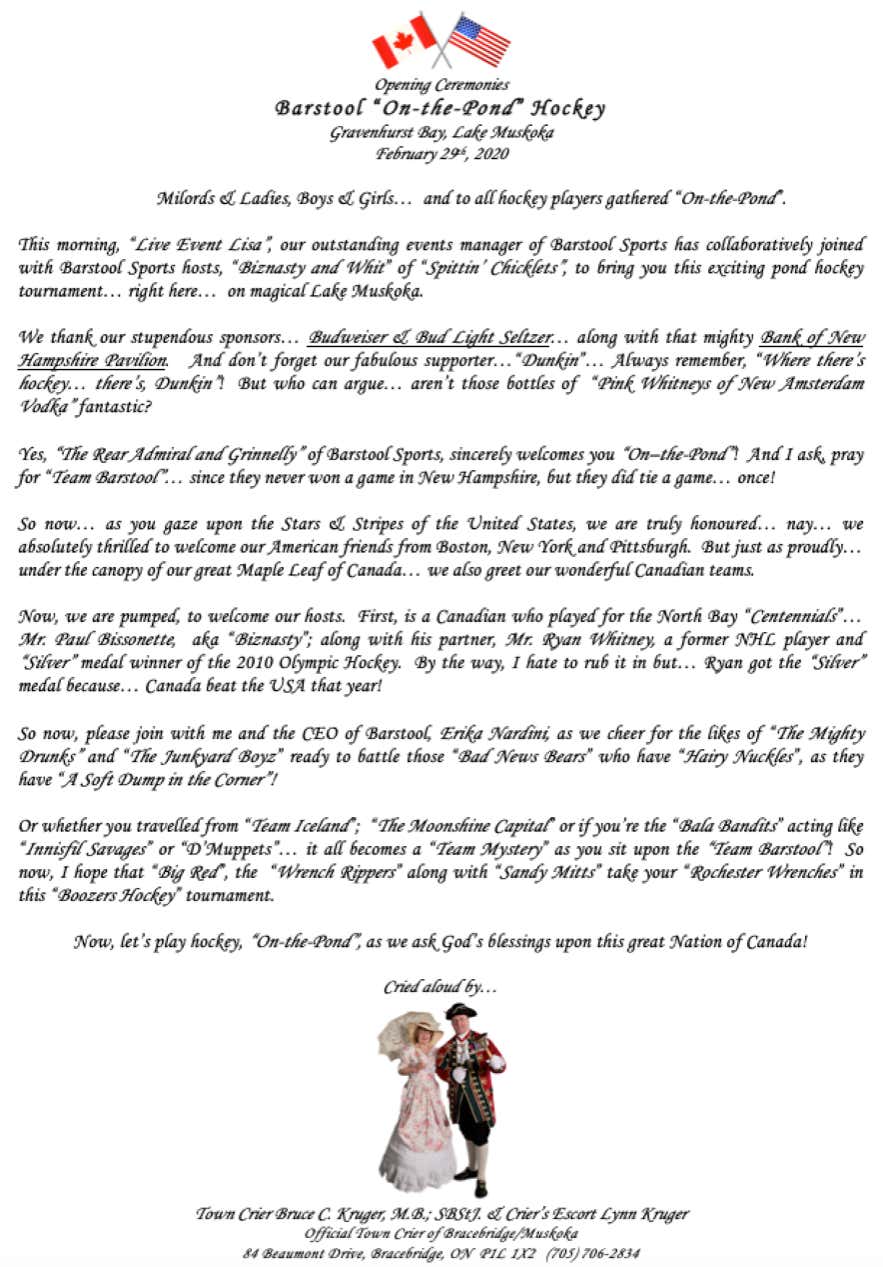 The odds were stacked against Team Barstool from the start, very few on the lake/earth had any faith whatsoever 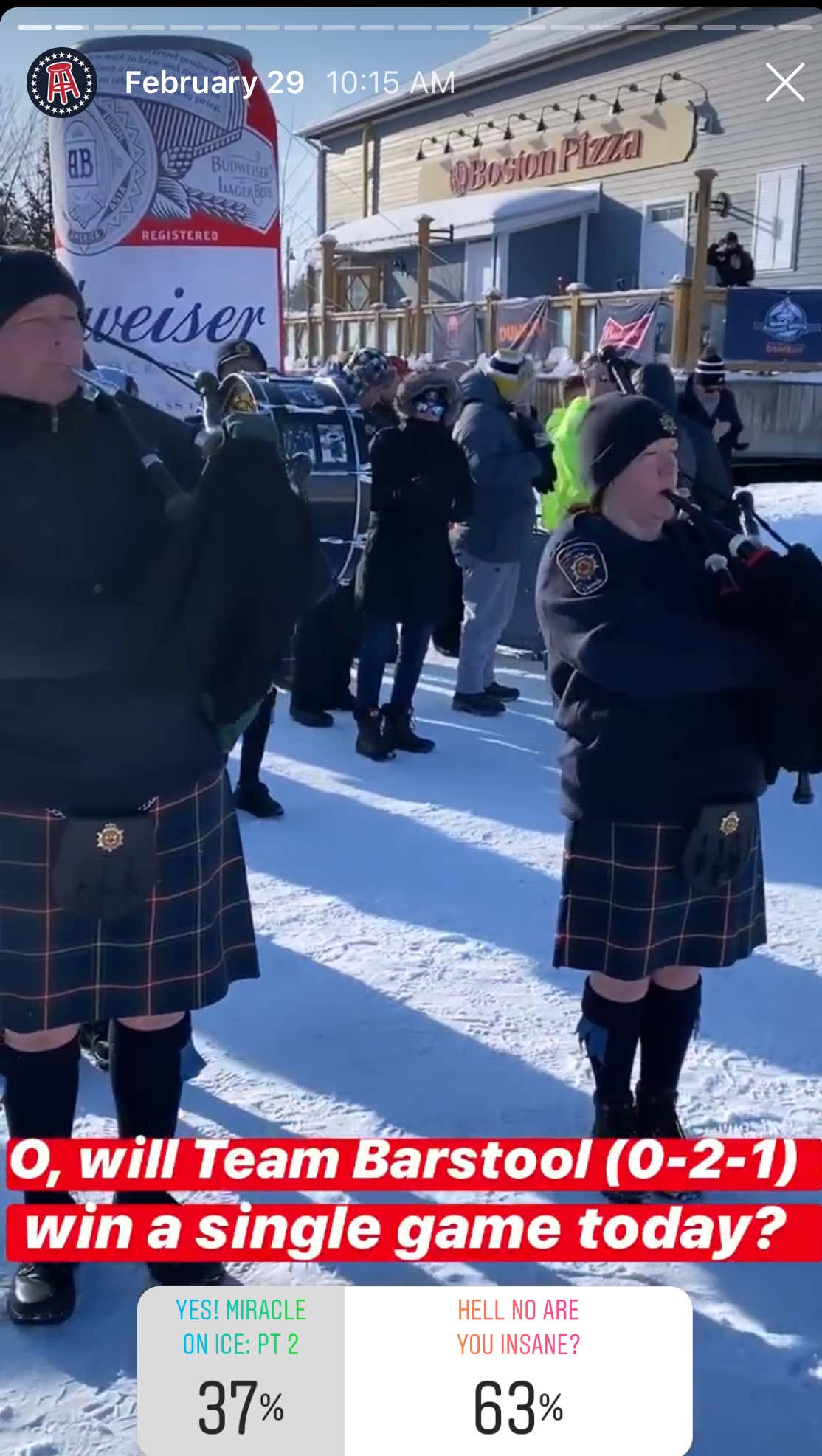 Scoring error or not, Team Barstool fulfills thy prophecy and goes DOWN in Game 1... Aside from Babs, gotta give Team MVP to Feitelberg who was willing to do "anything" for the squad

The mood was different than after a loss in NH though, the boys & girls were keeping the faith... YP even GUARANTEED a win??

But things were looking bleak in Game 2, until this moment on the bench with a secret weapon from Ryan Whitney

69% OF THE TIME IT WORKS EVERYTIME! REMEMBER ANCHORMAN 1? SPACE JAM REFERENCE! TEAM BARSTOOL DID IT!!!

But 1 win wasn't good enough for HC Nardini she wanted more, even at the expense of no more Secret Stuff in Game 3

Our Queen of the North also knew the 1 missing ingredient they needed, #28 Tie Domi

Honestly don't think anyone had more fun than AC R.A. on Lake Muskoka

Speaking of leaving it ALL out there, shout out to Feits for willingly sacrificing for the #GOOD of the team

Johnny Shades is a fucking awesome name. That's a guy that looks great even when he looks bad

Without Johnny D on the ice, Team Barstool fell apart trying to keep up with the Canadians air raid offense

Keep an eye out for bonus content coming from Barstool Canada soon, run by some real beauties

Team Barstool lost but in many ways they won. No injuries? No surgeries? Free ice cold beer? WIN.

In the end, TEAM ICELAND won the whole damn thing. Congrats to our Canadian champions!

Dunno where this accent is from but I NEED it. What a goddamn legend for the boys

Thanks to everyone who played, watched, drank, hung out with us in Canada & NH! Now that I have the feeling back in my cold withered bones I can truly say, it was a truly phenomenal experience at both spots.

And this is certainly just the beginning of Barstool Pond Hockey... SEE YOU NEXT YEAR