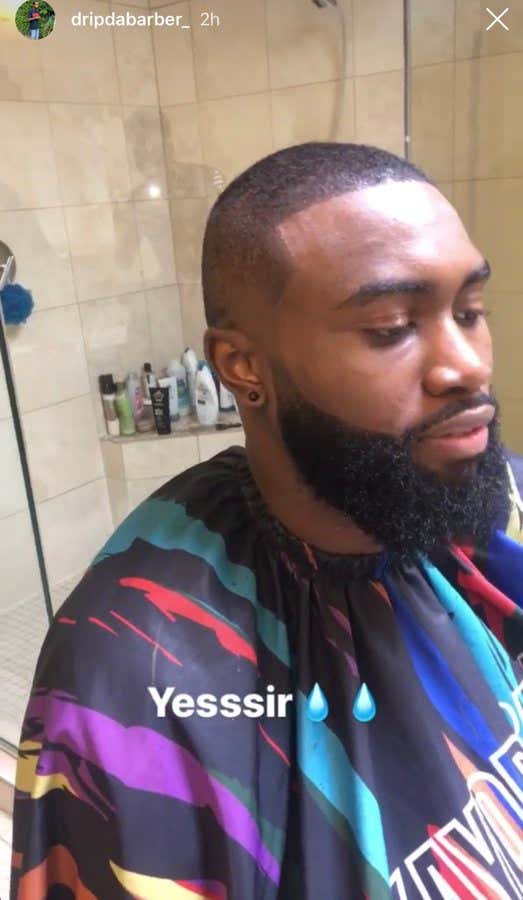 Make no mistake about it, this is huge news and frankly my brain is in a pretzel trying to figure out if this is a good or bad thing for what is essentially the most important season of Jaylen Brown’s career. A stoolie sent me this who has connections to the barber so I’m going to consider this 100% real. Woj/Shams get scoops about his potential contract extension, I get crucial hairstyle scoops. That’s the Barstool Difference for ya.

But seriously, this is either going to be what sparks a huge All Star level contract year or it’s going to be a complete disaster. There is no in between so let’s look at the facts of each side.

– Everyone with a brain knows hairstyles directly impact how an NBA player shoots.  You may think I’m kidding but I’m not, there was a whole Reddit deep dive on the subject and when has Reddit ever lied? We saw something similar happen with Marcus Smart and his hairstyle change which directly impacted his improved shooting

Then, remember that dogshit start to the year Kyrie had at the beginning of last season? He had the new hairstyle that was longer and it was clear his offense was suffering. Well then he got it cut and….

I even threw out there that maybe the cure to Jaylen’s struggles to start last season warranted him following a similar path. There is no denying that for whatever reason switching it up and tightening things up directly leads to improved shooting/offense. Considering that’s something we need to see from Jaylen this season, you should absolutely be excited with this recent development. This could very well be the first step to a breakout season.

Without it, who knows if he’s going to have that same ability to put people on a poster. Seeing as how that’s one of the more exciting parts of Jaylen’s game, there’s reason for concern there.

– You have to factor the hit to Jaylen’s cool factor. Listen, the flat top played. It was a main contributor to why Jaylen is so cool.

– This is officially the end to the famous Isaiah vs Jaylen hair rivalry. It was alive and well just a few months ago, and for Celtics fans it was one of the best things going

It’s sad that after all these years it’s finally over. Jaylen had been on record saying he would only cut it when Isaiah dunks on someone so if that footage exists I’d certainly like to see it.

I cannot stress enough, this is not insignificant. One way or the other this decision is going to play a huge factor in what type of season Jaylen Brown is going to have. The basketball evidence suggests it’s a good thing, but I can’t get those cons out of my head. Maybe he was serious about wanting that 5/170M and he was willing to do whatever it took to increase his chances of earning that deal.

Either way, if you are thinking of putting some money on the Celtics win total this season, you HAVE to factor this in. Like I said this is either the start of a dominant 4th year or the Celtics season is fucked before it even starts. My money at the moment is on the breakout year, the evidence is just too strong.