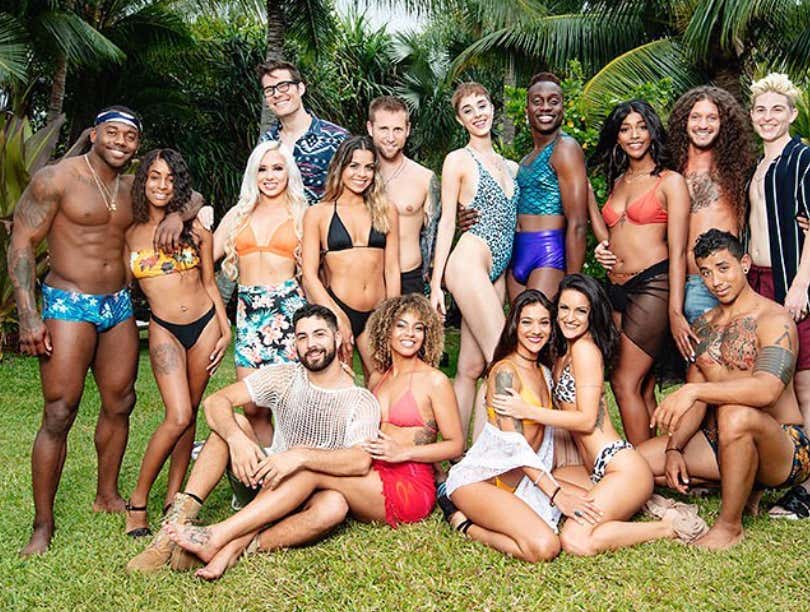 Source - Producers have rounded up an all-queer cast for the eighth series of the dating show, which is now streaming on NowTV.

All 16 contestants are attracted to all genders, identifying as bisexual, pansexual or sexually-fluid, a first for US television.

The cast includes Basit Shattu, a non-binary pansexual drag artist, Kai Wes, a queer transmasculine nonbinary person, and Paige Cole, a bisexual restaurant server who used the show to come out to her family and friends.

In the US, where the series has been airing since June 26, viewers have been thrilled by a series of NSFW scenes.

A fivesome caused a stir in one episode, but Shittu said that the contestants’ liberal attitudes towards sex shouldn’t be linked to their LGBT+ identities.

The reality show follows a similar format to Love Island, with the contestants jetted out to a remote getaway to find love.

Ahead of the series, each contestant submits a thousand-page questionnaire and a personality test, which are analysed along with interviews with family, friends and exes.

You dirty mother fuckers. I knew this was going to happen the second the show was announced. A lot of people were excited about it too. Not me. I saw the writing on the wall before it was ever written. Put a bunch of LGBT+ people in a room together, add alcohol, and things are going to get freaky. A blind man could tell you that. I just didn’t know things would get this freaky this fast. I mean, a fivesome? In the first episode? Really? It’s not last call at Barracuda, you have all season to pick someone up. Maybe take it slow and don’t paint an entire community as a group of hypersexual party animals.

I get it though, that’s what they’re there for. There’s no need for them to rationalize their behavior with an outrageous quote that everyone knows isn’t true…

…or maybe there is. Regardless, saying that straight people have fivesomes is a flat out lie. I’m sure some of them do, but group sex in general is more often than not a gay-specific behavior. I haven’t ever partaken in it (virgin with low T), but that’s a fact.

Anyway, chances are this show will end up cancelled like MTV’s Fire Island. They came out of the gate too hot and now straight people are scared it will ‘corrupt the children.’ Especially considering gifs like these are floating around the internet.

Yuck! Hopefully all the contestants find true love before they’re off the air.