So veteran Stoolies know that I am a thoroughbred owner. For the uninitiated a thoroughbred is a type of horse exclusively owned by the rich and famous that race for money and prestige.)

Anyway as a horse owner my number 1 dream has always been to get a winners circle picture at Saratoga with a horse I own. The problem is everybody wants to win at Saratoga and I’m not nearly rich enough to compete in this sport.  I’m like a poor person when it comes to owning horses. Most owners have tons of horses while I only have a few and most of them suck. So the task of getting this winners circle photo is far more difficult than it may first appear.

Well long story short the Saratoga meet started 2 weeks ago. I pretty much just lay by my pool and bet every race every day. I think I’m 1 for 50 so far this summer. I did tweet out the one race I won and said don’t let me get hot.

Now is where this story gets weird. So the day after the race my buddy who I own a bunch of horses with texts me and says he has good news and bad news. The bad news is he forgot to tell me our horse was running at Saratoga yesterday. The good news is that he won. 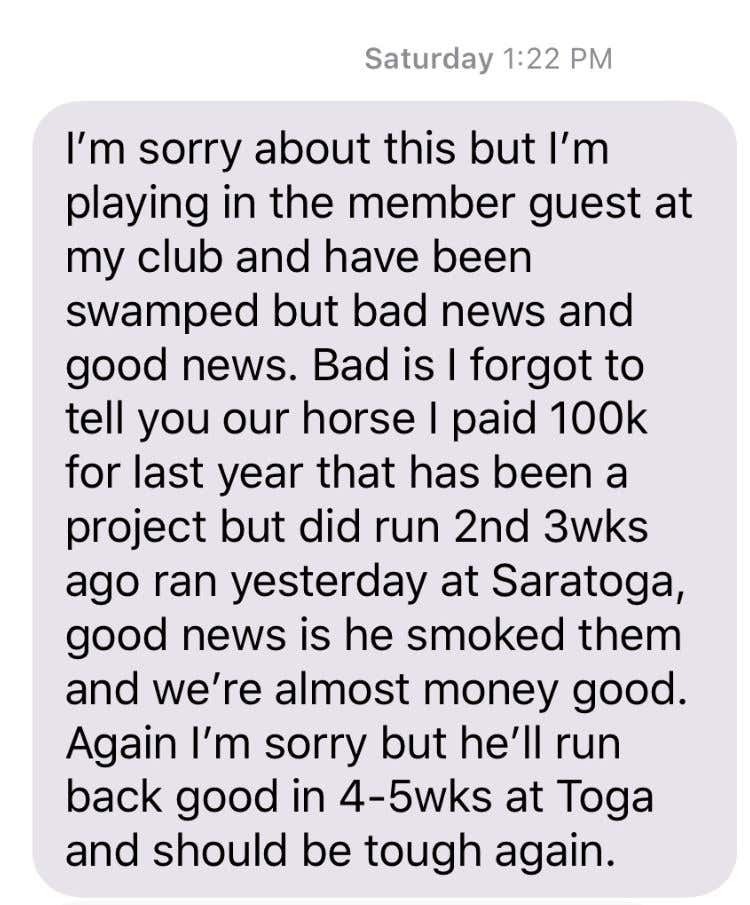 And guess what? Yup the horse I bet on and won with and tweeted about was the horse I fucking owned 25% of,  I just didn’t realize it at the time.  It’s a moment that is so perfectly me I can’t even put it into words. And yes had I known he was running I would have been there and gotten my dream Saratoga winners circle photo

Now I’m sure everybody is going to ask how didn’t I know I owned him. Well it’s because we bought him for 100k over a year ago and he had all sorts of issues. He never ran and I kind of forgot about him and totally forgot his name. That’s how.