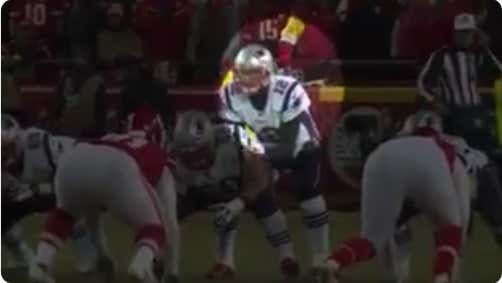 Source – A Lee’s Summit man has been cited for allegedly shining a green laser pointer at the face of New England Patriots’ quarterback Tom Brady during the AFC championship game at Arrowhead Stadium.

Dwyan Morgan, 64, was given a ticket for disturbing the peace and faces up to a year in jail or a fine up to $1,000, Jackson County Prosecutor Jean Peters Baker said in a news release Tuesday.

The incident happened in the fourth quarter of the Jan. 20 championship game, where the Chiefs were defeated 37-31 in overtime. …

The Chiefs said the fan was not a season ticket holder and faces a lifetime ban from Arrowhead Stadium.

It’s not always easy to acknowledge one’s own errors. And there are different schools of thought as to whether one even should. Napoleon Bonaparte once famously wrote, “Never retreat. Never retract. Never admit a mistake.” Steve Jobs said of mistakes ‘It is best to admit them quickly and get on with improving.” Then again, probably my favorite philosopher/conqueror/business mogul, Quint, told Matt Hooper “You wealthy college boys don’t have education enough to admit when you’re wrong.” A day or two before he was horribly eaten by the creature he was recklessly going after. But still, his point is well taken.

And in this deep, philosophical debate, I’m going with the school of thought that if you truly are a man of your convictions, you admit when you are wrong. Which I was when I said the Kansas City Chiefs had no intention of bring the man who pointed a laser at Tom Brady to justice.

So I offer my heartfelt apologies to the Chiefs organization, Arrowhead security and the good citizens of Missouri for rounding up this perp and dragging him before Lady Justice. Maybe you haven’t won a title since Hank Stram won that one during the Moon Landing days, Andy Reid struggles with clock management and this business of trying to change the overtime rules is not the best look. But by God, you’re getting the big ones right.

Now it’s just up to your court system to do the right thing. The terrible swift sword of justice needs to come down hard on this Dwyan Morgan maniac. He’s a menace to society. Who not only wanted to cheat to win the AFC title game, he tried to damage the beautiful, heavenly, sky blue eyes of the best quarterback of all time.

That said, a disturbing the peace charge sounds pretty weak to me. You can get that for acting like a dick in a coffee shop or harassing people for spare change in the subway. I’m expecting that by the next court date you’ll make the charges more appropriate. Assault & Battery with a Deadly Weapon. Defacing a National Monument. Domestic Terrorism. Blasphemy. Something like that.

And while a year in jail and a lifetime ban sound harsh, are they really? I think if you give him anything less than a life sentence or a cell along The Green Mile, you’re just encouraging other Imperial Stormtroopers out there to try and stop Brady with their dangerous, high tech, cornea-melting weaponry.

So while I stand by my apology, you still have work to do. Throw the book at this guy. A book the size of the one that will list all of the GOAT’s records when he finally retires. Only then will justice be served.