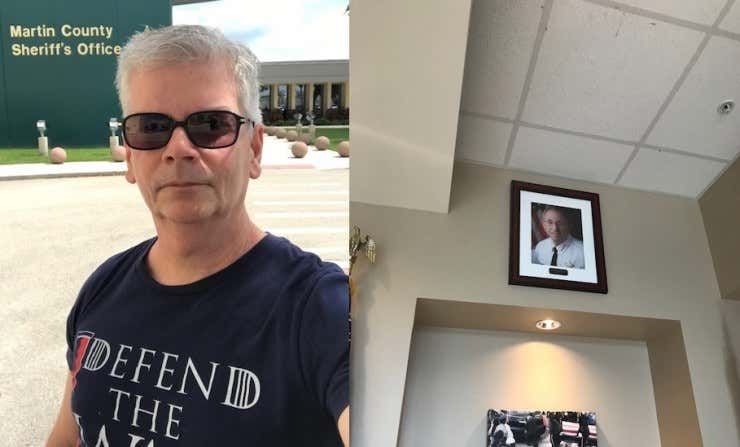 When I last left you in my Jupiter, Florida investigative adventure into the Asian Day Spa scandal, I was rested and refreshed from my very legitimate and not-at-all sexual Asian Massage. So it was time to get out in the field and start tracking down leads.

The situation called for some real detective work. For a gumshoe. Or a flatfoot. Or whatever they call them on Turner Classic Movies on the TV in the corner of the waiting room when I’m getting my oil changed. It was time for some journalism, tracking down leads and speaking truth to the powers that be.

This guy. The Press Conference Aficionado who has never met a bank of mics and cameras he and his Captain Steubing outfit would not stand in front of and dispense justice: 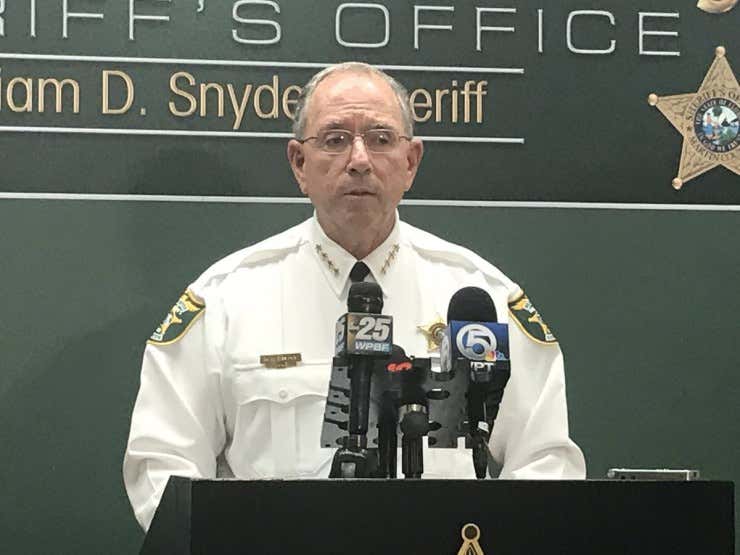 Surely he’d be anxious for yet another chance to pound the desk about the scourge of human trafficking and all the women held in sexual bondage and squalid conditions to satisfy the wanton lust of dirty men at the Orchids of Asia Day Spa in a busy strip mall. After all, Snyder is the guy who spoke at the first press conference. He’s the one whose been writing Op Ed pieces in out of state newspapers like John Henry’s Boston Globe where he’s said things like this about the issue:

With court-ordered video surveillance in place, we found that the women selling sex acts in these strip mall brothels were virtual slaves: They rarely left the premises; they serviced an average of eight men a day, without protection; they slept on the massage table and cooked on hot plates; they were moved every few weeks to another branch in this network. We tracked $20 million in money flowing back toward China from this spiderweb of spas across southern Florida.

Yet for me as county sheriff, the starkest revelation during this journey was how the local men in our community — some rich, some ordinary, many of them respected family men — were the drivers of this abusive business.

So I showed up at his office assuming he’d welcome the opportunity to shed more light on this scourge and put an end to this exploitation once and for all.

I did meet a very nice woman who, when I introduced myself and told her I was there to speak to the Sheriff, went out back and got another very nice woman. After repeating what my business was, she indicated Snyder was in meetings and wasn’t available. Which I half expected, because people in power have been sending people with less power out of doors to say they were taking a meeting since probably Xerxes. It works because it’s plausible.

So I told her I understood and would be happy to speak to anyone involved in the investigation into Orchids of Asia. And – very professionally and respectfully – she gave me that “I can’t help you” look Car Rental Counter Lady gives Steve Martin when he says he threw his his rental agreement away.

This is how our exchange went, more or less. I’m paraphrasing:

Sheriff’s Department Lady: “Our department didn’t handle the Orchids of Asia case. We’re Martin County. That was in Jupiter, which is over in Palm Beach County.

Me: “Well, I came here because Sheriff Snyder did all the press conferences.

Lady: “Yes, he did do the press conferences but he wasn’t involved in that investigation.

Me: “But he’s written Op Ed pieces in The Boston Globe and some other papers.”

Lady: “Right. He did the press conferences and wrote the Op Ed articles, but this department wasn’t involved in the investigation.

Me: “Why would he be talking about it and writing about the Orchids case if he didn’t have anything to do with it?”

Lady: “We looked into some other spas, but not that one. You want to try the Jupiter Police Department.”

So next stop: The Jupiter Police Department.

But before I do, since I obviously hit a dead end here, I’ll provide at least some info, from late January:

Sheriff’s Office officials Monday released the names of 11 people who were freed from jail last week when tests revealed substances that were the basis of some narcotics arrests were not drugs. Sheriff William Snyder fired Steven O’Leary, the deputy who made the arrests. …

Snyder said the agency has sent about 120 substances, previously identified as drugs, to be retested by the Indian River Crime Laboratory. He said the Sheriff’s Office had not received reports back as of Monday afternoon.

And this, courtesy of my crack team of investigators, Wikipedia:

William D. Snyder (born September 6, 1952) is the Martin County, Florida sheriff and former Republican politician who served as the District 82 representative in the House of Representatives of the State of Florida. … In 2012, Snyder was elected as the 8th sheriff of Martin County, Florida, and subsequently re-elected to a second term in 2016 with 78% of the vote. He was first elected to the Florida House in 2006 and was re-elected both in 2008 and 2010.

So if you’re wondering why a Sheriff would grandstand about an investigation he had nothing to do with, that turned up nothing except one billionaire philanthropist getting a Rub & a Tug & a Hug from a 58-year-old masseuse and try to make it sound like the crime of the century, here’s all you need to know. His department is in the wake of a major drug-planting scandal. He’s a politician. Next year is an election year.

PS. Snyder’s staff was nice enough to get me his email. Stay tuned.