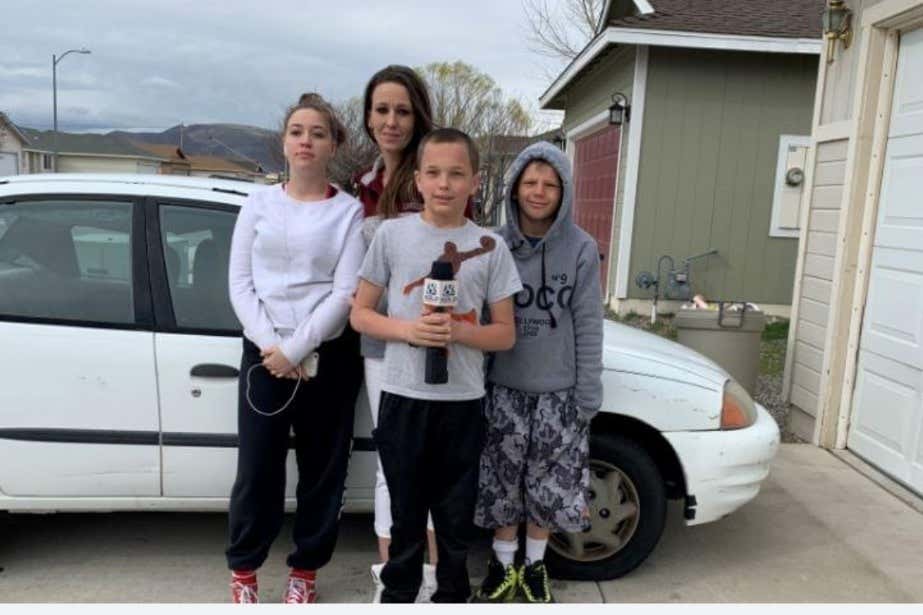 (Source)- A local family recently started life over after an unfortunate and unexpected situation. Krystal Preston, the single mother, lives in Fernley with her three kids and three dogs and is trying to make ends meet with no means of transportation. Her oldest son, William Preston, 13, does yard and house work for people in his community to make a little extra money. Being the oldest man in the house, he knew he wanted to help provide for his family. “I saw on YouTube where people get their mom a car and then surprise her with it,” William said. “I wanted to do that.”

William was scrolling on Facebook and saw a woman selling a 1999 white Chevrolet Metro. “It was really cheap so I asked her if I could trade it or earn it, and at first she said no and after she thought about it, then she said yes,” William said. After negotiating with the woman, William’s quest soon became reality. He then went home to tell his mom the news.

“Mom, I got you a car and she didn’t believe me,” William said. William and Krystal walked outside their home, and sure enough, the woman selling the car was there waiting for them. She drove the two of them to her house where the car was parked. Krystal was stunned. “I lost it, I bawled, I was just like, there’s no way,” Krystal says. “And then she gave me the keys and the paperwork.” Even with a few quirks and a little work needed, Krystal says the car is perfect.

Welcome to another addition of Feel Good Friday where we read a story that makes us feel good inside…Right? Okay, the jig is up. All this story did was make me feel like a big fat asshole. I’d like to think that if I was in the same situation as our friend Will. It doesn’t matter if it was brick by brick, lawn by lawn, or vial by vial. I would have done whatever needed to be done to help my family as the man of the house for the woman that carried me in her womb for 9 months and made countless sacrifices for my well-being.

However, I still remember what it was like to be a 13-year-old kid and I know that I probably wouldn’t have paused my XBox to kiss my mom goodbye before she walked 10 miles uphill both ways for the first of her four different jobs to support me and my siblings. There are parts of my body I would have sold before I sold my video game system. And when it comes to manual labor, the smattering of leaves currently laying in my yard from the fall shows my current love for yard work, despite me having the dad gene of being super proud of whenever my lawn actually does look nice.

So hats off to you William Preston for being a better man than I could ever dream of being already at the age of 13. You are the role model my kids deserve. However in my defense, I would have made sure to film the surprise of my mom seeing the car and put it on YouTube because that is a once in a lifetime reaction. Heroes that get stories written about their selfless deeds get remembered, but legends that go viral on the internet for car surprise videos never die.