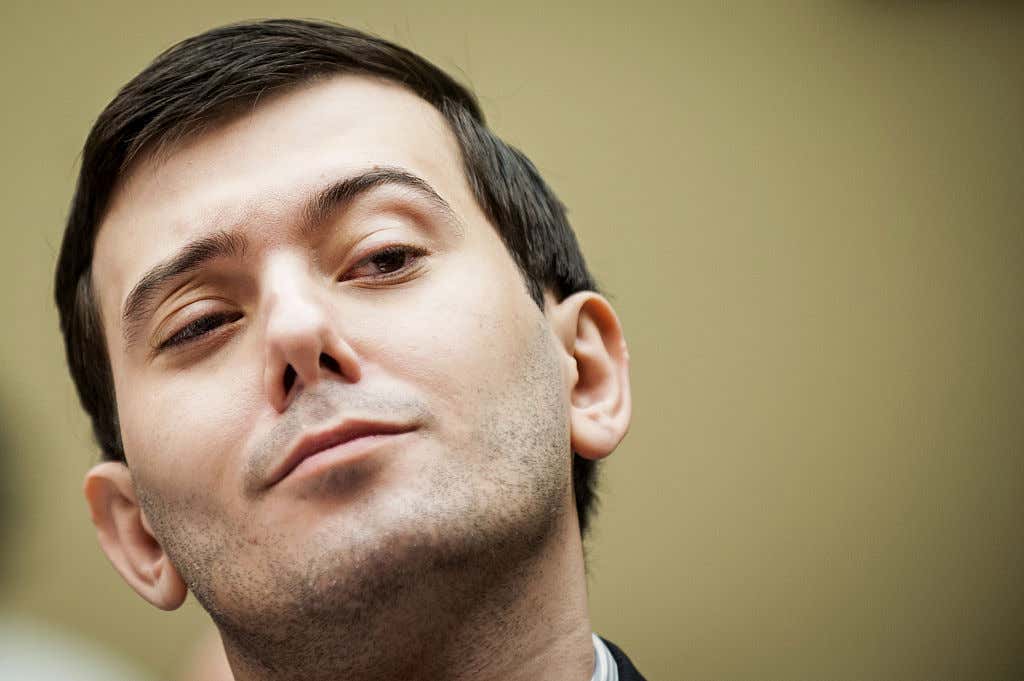 I Googled “Martin Shkreli Movie” and nothing came up. Nothing in development, nothing coming soon to Netflix.  I mean there’s that one episode of “Dirty Money,” but there’s nothing in the works for a whole 2 hour feature film starring Casey Affleck (perfect Hollywood Doppelgänger) as the titular hero “Pharma Bro”???    Actually unbelievable.

I have a strong feeling that will change though as more and more people make the rounds on this Wall Street Journal story.

WALL STREET JOURNAL – From a top bunk in a 12-person prison cell in Fort Dix, N.J., Martin Shkreli is at work on a big second act.

Wielding little more than a contraband smartphone, the disgraced pharmaceutical executive remains the shadow power at Phoenixus AG, the drug company that became a national lightning rod for jacking up the prices of rare drugs under its former name, Turing Pharmaceuticals AG. Mr. Shkreli still helps call the shots. A few weeks ago he rang up his handpicked chief executive during a safari vacation—to fire him, according to a person familiar with the exchange.

This is the secret life of inmate 87850-053, 16 months into a seven-year sentence for securities fraud.

It’s a virtual certainty at this point, that movie – once people hear about how he’s running a $3.7 billion company from a contraband cellphone in jail.  How he’s using it to call up his greedy chief executives to fire them as they’re taking pictures of giraffes and wallabies on an African Safari vacation.

…At Fort Dix, Mr. Shkreli recently lost patience yet again with his executives. At year-end, Mr. Mulleady put in for a seven-figure pay increase. Mr. Shkreli, who has been generous with fellow prisoners and even paid their poker debts, was livid. He phoned the chief executive, who was on an African vacation with his new fiancée, to fire him, a person familiar with the matter said.

…Or hear about Krispy and D-Block, his two best buds who protected his otherwise flawless reputation by putting a stop to his guitar auditions with the prison band because the other members were child molesters.

He has made prison friends, including “Krispy” and “D-Block,” some of whom affectionately call him “Asshole,” according to people familiar with his new life. They walk alongside him in the hall to ward off shenanigans from other inmates. For reputational reasons they persuaded him to turn down a gig playing guitar in a prison band because the other members were locked up for child molestation.

…How he’s keeping his flow tight with some safety scissors but growing his beard out like a total bad boy.

Mr. Shkreli reads about research into fatty acids and the prevention of cardiovascular disease in the inmate computer lab or on his phone. He cuts his own hair with safety scissors and is growing a patchy beard. The low-security federal correctional institution is built on the grounds of an old army base about 90 minutes from Mr. Shkreli’s former multimillion-dollar Manhattan penthouse.

…How he’s working with prison therapists for his self-improvement plan of a) caring for prison cats for empathy, and b) doing fifteen (15) whole push-ups in a row for physical fitness…

…all while keeping his pretentious knack for correcting grammar intact.

He has seen a prison therapist and taken on the job of caring for prison cats. He occasionally argues with his cellmates about proper grammar.

…He’s even looking to broaden his cultural horizons with the Spanish version of Meek Mill’s “Uptown” to impress his Latin American hombres. 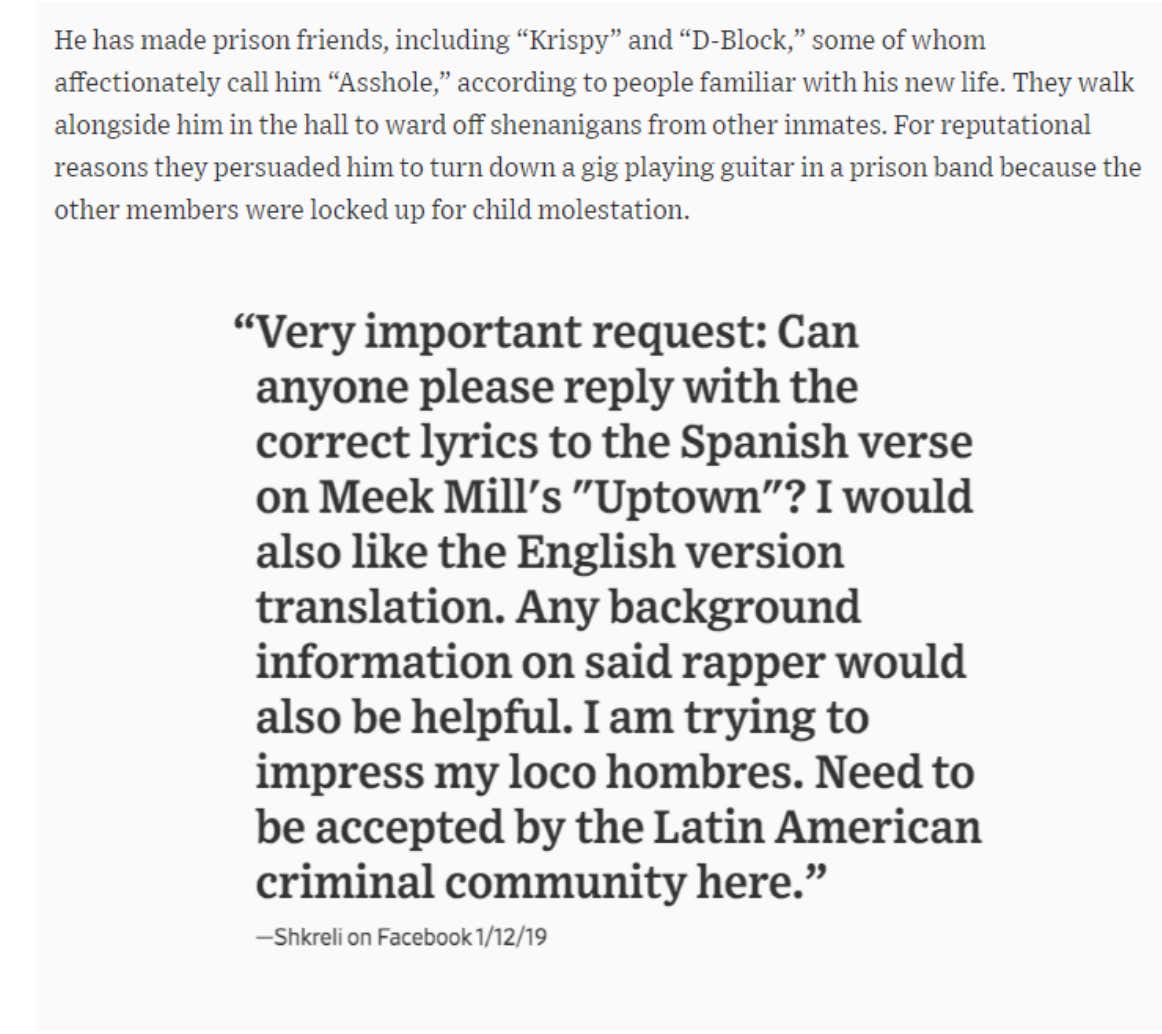 And through all that, he’s still keeping his business wits about him, using that illegal cell phone to continue to jack the price up on life-saving medication probably.

Despite being behind bars, he has worked to consolidate control of the company. He advised on two offers in 2018 to buy shares from existing shareholders at a steep discount. Some investors took the deal, while others held out in the belief that they could make more in a sale to a third party.

As of the end of September, Phoenixus had $37.7 million of cash, according to the company’s private third-quarter financial statement. It reported $48.3 million of sales for the year to date, with a $10.3 million net loss after operating expenses including $9.4 million spent on unspecified “research and development,” the statement says.

They say if you don’t use it, you lose it, and Shkreli is making sure to use every last ounce of his sociopathic scumbagness, every moment of every day, so he comes out of prison just as fresh of a scumbag as he went in…

…Even as his captors purposely disrespect him by pronouncing the h.

“The guards still mispronounce his name repeatedly, which he thinks is on purpose,” Ms. Smythe says. Based on testimony at Mr. Shkreli’s congressional hearing in 2016, the “h” is nearly silent.

…And as Big Twitter + THE LIBS continue to CENSOR him.

Banned by Twitter for lewd missives, Mr. Shkreli frequently tweeted in prison from his new account at would-be foes such as Rep. Alexandria Ocasio-Cortez, a Democrat, and Twitter Chief Executive Jack Dorsey. The account, which was deleted Tuesday, included the profile description “scaffold hopper,” an apparent reference to a process for discovering new drugs in medicinal chemistry.

“Here we go with the virtue signaling and white male shaming. @jack walks right into it, apologizing for making billions of dollars,” he wrote on Feb. 12, in response to a chain involving Mr. Dorsey.

That’s called desire, drive, human determination right there, a story any Hollywood studio would be LUCKY to tell.

Score the film with his Wu Tang album and you’ve got Oscar gold people.

(Speaking of Wu Tang, Juror #59 will NOT be viewing the movie)

(via The Wall Street Journal)