Source – Tackle football could become a thing of the past for thousands of Massachusetts elementary and middle school athletes, as state lawmakers consider banning the full-contact sport for young players.

Under a bipartisan bill supported by 17 House members, schools and leagues would be fined $2,000 for allowing children in grade seven and below to play organized tackle football, which research suggests is more harmful to young players than previously thought.

“We’re not banning football. Touch football, flag football, great. Up through the seventh grade, go to it,” said Rep. Paul Schmid (D-Westport), one of the lead sponsors of the bill. “What we’re saying is, for seventh grade and under, no tackle football.”

Schmid said the state government needs to step in because there is no single statewide authority that governs football like there are for youth soccer or hockey, sports that have taken steps to eliminate parts of the game that most often lead to head injuries.

“There’s a lot of science … that says we got to be really careful with young heads,” Schmid said.

Let me tell you exactly what’s going on here. Both as a father who coached two kids through tackle football for over 10 years but also as a hack who spent twice as long working for the scam factory that is the Commonwealth of Massachusetts. The operative phrases in all of this are “the state government needs to step in” and “single statewide authority that governs.”

This isn’t about eliminating tackle football in the early grades. And it’s not about protecting kids. It’s about doing what Massachusetts always does when there’s a problem, whether it’s real or just fictional: Creating a bureaucracy. Form a regulatory agency, make sure it pays really, really well, then staff it with relatives, friends and campaign contributors to the politicians who created it. Mark my words, that is exactly what’s happening here.

A few moms are worried because they heard on NPR that football causes concussions? That’s the perfect opening. Start a little fear mongering. Threaten to shut the sport down altogether. And when other moms, dads, coaches and kids object, say you’ll compromise by creating a “MA Youth Football Concussion Prevention Authority” to come in and save the day. For a lot, lot, lot of money. And if you think I’m full of it, watch how this plays out. When a commission is put in charge, see how many people work for it on a volunteer basis, just for the good of the kids.

Eliminating head injuries in youth sports is a legitimate cause. But in Masshole politics, no cause is so legitimate you do it for free. Or for chump change.

But let’s play the game. Let’s pretend for one second this is on the level and the buffoons who run this state aren’t bluffing. That they are so genuinely concerned with the health and safety of kids that they’re considering banning tackle football on the youth level. That’s even more of an outrage. 250 years ago we started a war to stop a tyrant from telling us what to do. And ended it. This would be us becoming the tyrant.

I can’t stress enough how safe I want youth football to be. Which is why I’m in favor of the measures that are already in place. And used every single day. Mandatory weigh-ins before every game. And if you’re above the legal weight, you have to sit out that game. No helmet hits. Officials that call the games right. Limited practices. Coaches teaching kids to lead with their shoulder pads and their heads to the side. An EMT at every game or else it doesn’t get played. Essentially common sense approaches, as opposed to the hysterical, draconian money grab that getting the State House involved is going to be.

All that melodramatic, mawkish stuff you hear in old NFL Films about football teaching life lessons is true. All that stuff about it teaching you teamwork and discipline and the bond of working together to reach a common goal really happens. It’s not a bunch of mawkish B.S. And just as importantly, if the coaches aren’t psychopaths, it’s actually fun. And safe. I can honestly say that in 11 years I had more players seriously hurt on the playground, the school bus, or running around after practice with their pads off than actually playing or practicing.

I’m not a maniac. I’m not about putting vulnerable kids into harm’s way just to satisfy some stupid jock fantasy. I’m a father who saw first hand what playing tackle football did for his sons. It flat-out was the best thing I ever did for them. My older kid was average sized and took to it naturally. At the first water break of his first practice he came up to me and said “Dad, I’m loving this” and played all the way through high school. 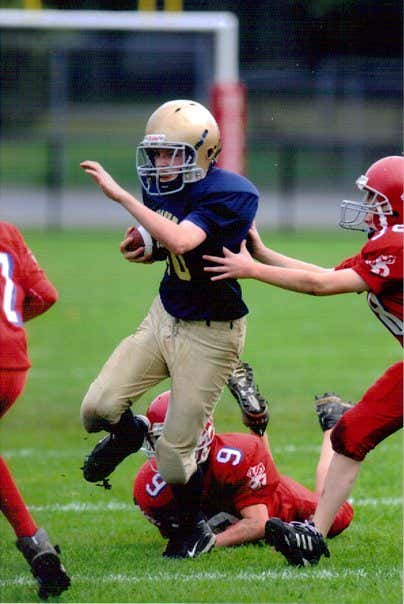 His younger brother was the smallest kid on his team, by a wide margin. Two weeks in, he wasn’t grasping the concept and was maybe one practice away from turning in his equipment and calling it a career. But something clicked. He learned he could tackle bigger kids without getting hurt and take a hit started to love the game. It toughened him up, gave him confidence he didn’t have and made him part of something special. I wouldn’t trade the tackle-for-loss he had on the goal line when the head coach put him in at nose tackle or the fumble he recovered for all the awards he ever got in school, scouting or music. 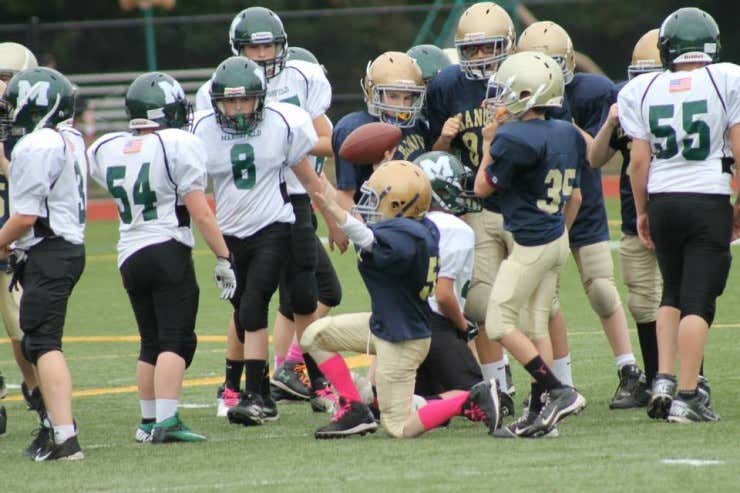 So if you want to alter the rules to make it safer, fine. Some have suggested widening the neutral zone or putting the linemen in 2-point stances like the college spread. But turning everything into Flag or Touch Football is madness. It goes against nature. Boys are like lion cubs play fighting on the African savannah. They want to rough house. In all the practices I ever ran, never once did I hear of a kid who didn’t want to run a hitting or tackling drill. Every one of them could’ve lived without hearing a coach talking, ever again. But when it came time to run Oklahomas or Angle drills, they couldn’t get enough of them. Kill tackle football in some misguided, uniformed attempt to make children “safer” and you’ll be doing more harm than good. We’ve got plenty enough kids who are soft little blobs of flab without eliminating yet another thing that makes them stronger, tougher and frankly, better.

But again, I’m saying this is all just a transparent money grab by the state government. Let’s see who’s right.