So the Academy Awards ceremony was held last night…  I watched most of it for some reason, and to no one’s surprise, I walked away totally and utterly unimpressed.

The amount of self-commendation, acclaim, applause, approbation, approval, appreciation, regard, praise, veneration, adulation, extolment, tribute, accolade, and plaudit for these preening over-payed show ponies is EXHAUSTING.  I realize I watch mainly for the In Memorium segment while spending the rest of the show wishing more of these myopic coozes would show up on next year’s In Memorium segment.

The political and moral high ground taken annually by the same #metoo-pin-wearing uber-wealthy Hollywood cabal that found it in their hearts to give Kobe Bryant an Oscar last year is just unpalatable.  And the seemingly-earnest tears and applause that ooze out of the audience towards the winners are misplaced.

Don’t clap for Gaga or people of that ilk because they were put in airconditioned trailers filled with truffles and cocaine for countless hours until their time came to spend counted minutes shedding million dollar fake tears.

Save that recognition instead for actors and actresses that actually earned it.

More specifically, save it for one particular actress who quietly swept an award ceremony for her line of work, and did it after literally shedding blood, sweat, tears, and at least 5 or 6 other bodily fluids in the quest for perfection within her craft. 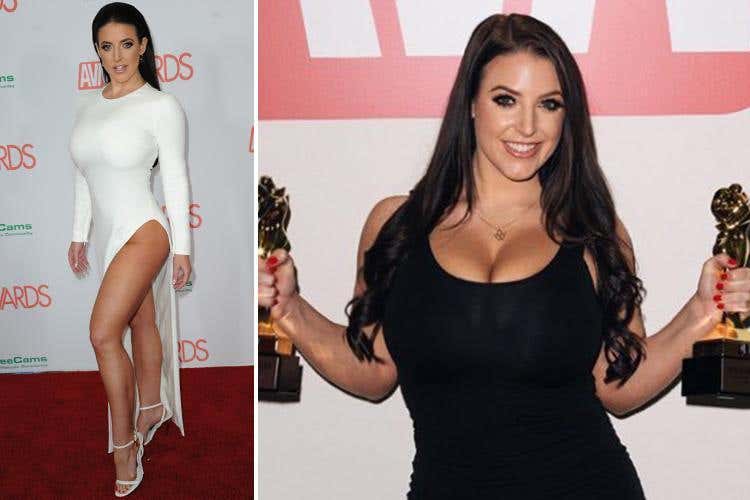 … A woman who absolutely DOMINATED the annual AVN Awards just a few short weeks ago.

I am not overly familiar with Angela’s work, but from what little “legwork” I have done, I have been nothing but impressed.

She’s not even overly in-shape.

But she is overly-convincing…  From my comfortable vantage point, I can say with confidence that she loves what she does.  And if I am dead wrong with that assumption, then she deserves these awards all the more.

Another thing about her that I find EXTREMELY endearing is that she takes little GIF-sized clips of her walking around in low-cut tops.

In an industry where your “thing” could be shitting on step-moms, Angela’s “thing” is that she walks through her apartment, hall, street, store, whatever with nothing but a jiggle and a smile…  And that is much appreciated from a blogger that likes GIFs, but not ones that are too pornographic.

So without further ado, here are the 10 awards Angela took home this year in an award show performance that has never been seen before, and I believe will never be seen again.

The first one is a biggie because it necessitates that its winner is very good in all facets of her job…  Apparently, Angela is because she won…

After that, we’ll get more granular, including the award for Best Actress In A Featurette…  A featurette is a film usually three reels in length, or about 24–40 minutes in running time.  So longer than a two-reel short subject, but shorter than a feature film.

Two, three, four, or ten reels…  It really doesn’t matter because Angela can do it all.

I am not sure if Ms. White really nailed it in Angela Loves Women Parts 1, 2, or 3, but she finally came into her friend by the fourth installment after winning…

I read how Lady Gaga had to ‘dig deep’ in order to nail her character in “A Star Is Born”…  If you think Gaga dug deep, then watch Rocco in this film.

I Am Angela, Evil Angel Films

One of the things I am most proud of is my Kindergarten report card said I “played well with others“.

And I also performed well in small groups.

This next award may seem like a given after seeing the dominance above, but keep in mind…  She was literally up against THOUSANDS of seasoned cocksuckers, and she won by a HUGE load of votes…  And I mean a GIGANTIC load.

And finally…  You can go you’re whole life knowing how to please judges, but ultimately you are performing for the people.  And to have your excellence recognized by both must be truly spectacular.  Angela won what I think are the 2 most important awards for the fan-voted section of the AVN‘s

I know I spoke in sometimes annoying hyperbole throughout most of this blog, but I only did it in order to cast a spotlight on an actress that I feel was left off the front pages this award season.

I take back my earlier sentiment wishing more actors would die before next years Oscars, but I do it only on the grounds that all 8 of the people still reading this blog remember one thing…

Not all heroes wear capes.  Some wear nothing at all and are covered in semen.

Have a good week, everyone.