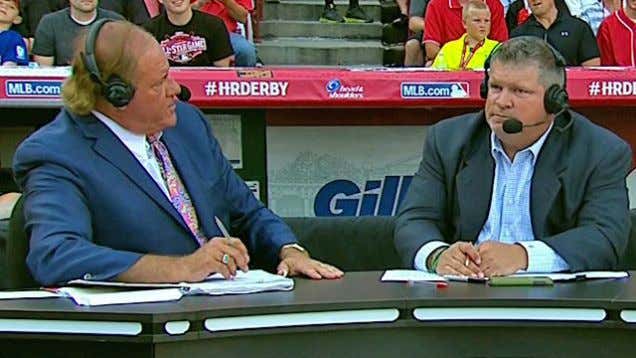 (MASSLive) – ESPN broadcasters Chris Berman and Sean McDonough will be among Joe Castiglione’s partners in the WEEI booth for Red Sox broadcasts this season, according to an announcement from the station. WEEI will employ a committee of partners for Castiglione to replace Tim Neverett, who left after last season.

Berman, who has been with ESPN since 1979, and McDonough, who was the Sox’ play-by-play announcer from 1998 to 2004, will be joined by former Mets announcer Josh Lewin and former Tigers broadcaster Mario Impemba in the rotation. Familiar names like Lou Merloni, Dale Arnold, Tom Caron and Dave O’Brien will also fill in on some broadcasts.

The next step here is to get Berman and Eck in the booth together for the live broadcasts. I don’t care how much NESN has to pony up to make that happen but it’s a need not a want. You want baseball to become more enticing to the youths out there you get Berman’s noise machine of a voice box paired with Eck’s nonsensical ramblings in a language only he understands on the same broadcast. That has potential to be the most electric pairing in sports entertainment history.