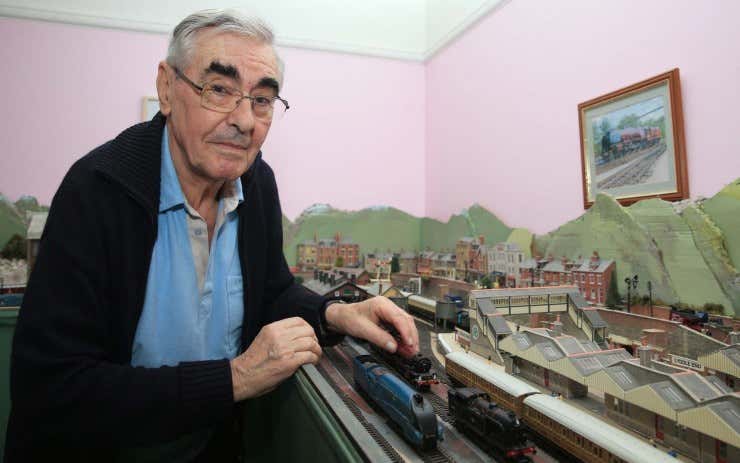 Source – An octogenarian tackled a burglar who attempted to steal his model railway collection and sat on him with his wife until police arrived to make an arrest, a court heard.

Barnes, 28, was carrying a metal butter knife in the front pocket of his jacket and had used a brick to smash his way in to the rural property while the couple slept, a court heard.

Mrs Headington was woken at 1am by the sound of Barnes breaking in through their kitchen door, Lincoln Crown Court was told. …

Mr Headington, who has had two hip replacements, got Barnes in a bear hug as he emerged from the room carrying some of his most valuable model trains. …

Ever notice how you come across somebody once in a while that you shouldn’t have fucked with? That’s John Headington. Get off his model trains.

Nice try, Robert Barnes. You might know burglary. You might be an expert in home invasion. But you obviously don’t know jack squat about 85-year-olds and their toy trains. Certainly not the kind of 85-year-old with the energy to satisfy a wife 30 years younger than him.

You could’ve threatened to take anything … an … y … thing … from John Headington’s house and he probably wouldn’t have cared. Money? It’s nothing to a guy like him. The government sends him checks faster than he can spend them. Valuables? He’ll be dead soon and can’t take them with him. Mrs. Headington? Well … just don’t make too much noise while he’s switching tracks and adding that new addition of the coal loader.

Those train sets don’t set themselves up. They’re a lifestyle. They take patience and care and become the whole world for a guy like him. Believe me, I took my kid to a local train collector’s show when he was like 5 years old and into Thomas the Tank Engine. And one visit was all it took to convince me those sets are like heroin. Nobody dabbles in them. You either would never dream of touching one or it’s a lifestyle. And this burglar is lucky all they did to him was sit on his head and wait for the cops to come. Because he should probably be dead.

Next time you break into someone’s house (Disclaimer: I do not recommend you ever break into anyone’s house ever), make sure it’s not an old guy with nothing to do all day but obsess over hobbies meant for little kids and weirdo shut ins. This creep learned the hard way.