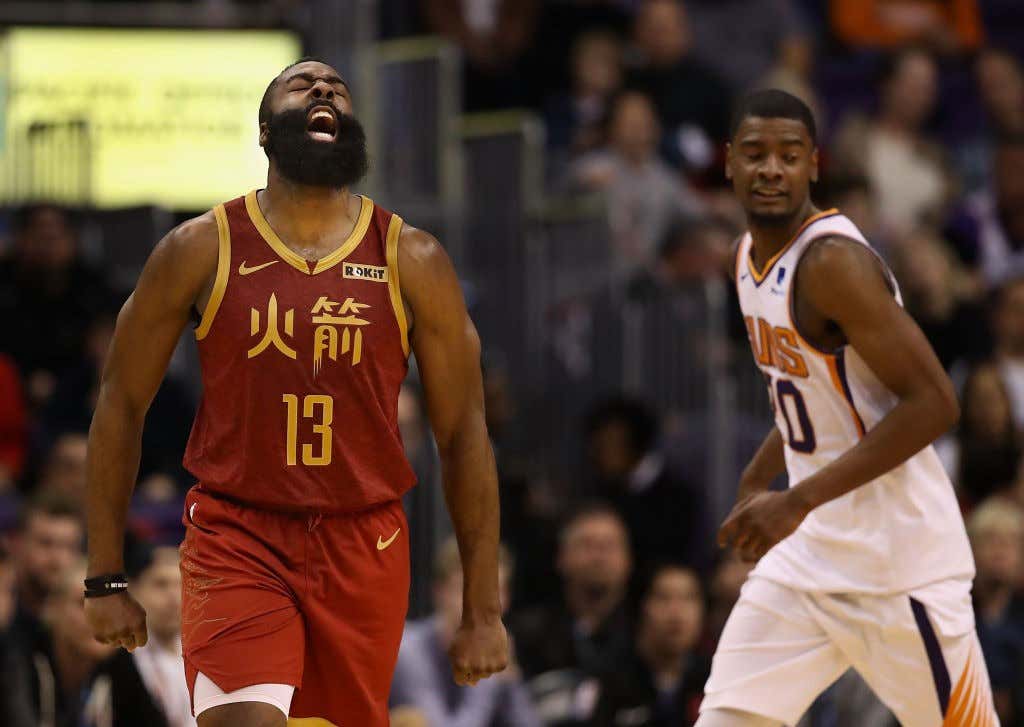 Good morning everybody and welcome back to another edition of Last Night In The NBA where we bring you up to speed on everything that went down from the night before in the Association. I know all the attention right now is around the trade deadline, but there were 6 games on Monday’s schedule and overall it was another fun filled night of hoops. Half of them were decided by 8 points or less, we had our fair share of surprise results and usual domination from a couple of MVP candidates. If you were unable to watch any of the action that’s OK, that’s the point of this blog so just keep reading. Here’s what happened.

I’m sorry what? Even with no Murray/Harris/Millsap, I’m not so sure this result was all that expected. Jokic still played, the Nuggets still have great depth, and they got killed by 26 by the Pistons??? Well, I suppose that’s what happens when you shoot 9-28 from deep. and the DET frontcourt pretty much held Jokic in check

That’s usually a problem when the Nugs are shorthanded. He needed one of his crazy triple doubles and that’s a tough ask going up against Blake/Drummond. It was cool to see MI native Monte Morris play well with 18 on 8-13 in his spot start

and the Nuggets came out and scored 36 first quarter points and looked to be in great position. They unfortunately followed that up with just 19 points, that opened up the game and they never were able to recover. Also doesn’t help dropping only 20 points in the fourth, but why then they were already down by double digits. This loss not drops them to second in the West just 0.5 games behind GS. For a team that gives up 106 a night, this was certainly not the defensive performance you want as you work your way through this 4 game road trip.

For DET, they have a ways to go in order to catch MIA in the 8th spot, and wins like this sure do help. The Blake/Drummond pairing was pretty much unstoppable with a combined 44 points on 18-22 shooting

they clearly set the tone for the Pistons and when you see them dominate like this it honestly makes you a little confused how they could be so bad as a team. Those two alone should have you at like a 6 seed. Then when it came time for the bench to contribute they got great performances from both Stanley Johnson who had 21 on 7-10 shooting

and Langston Galloway who had 18. This was the largest margin of victory of the year for DET, and honestly it was a preview of what we were about to get with some of the other games from last night.

Oh no ATL what the hell are you doing? Don’t you know you’re in a tank race? What are you thinking dropping 137 on the road and making 20 3PM? Sure that might have been fun to watch but it is NOT what you need right now. You’re now in the 5 spot in the Lottery rankings, and trail CHI by 6 games! You’ve played yourself you dummies

I will say, the one silver lining of this stupid win was seeing some Vintage Vince Carter

Is that worth ruining your draft position? No, but maybe they feel like they already blew it so now they should actually try. Either way, seeing them drop that many points on the road against WSH sure was a surprise.

For WSH, welcome to NBA purgatory. You can’t be giving up performances like that, you’re most likely not making the playoffs but are nowhere near the top of the tanking standings. Enjoy like the 8th pick or something? Surrendering 76 second half points is just hard to do, they never held ATL under 26 and gave up three 35+ point quarters. Offensively sure they were impressive, 129 is no joke and they had four players with at least 20 points

I will give them credit, usually their flaws come with no bench production and not showing up in the fourth quarter. In this one, they had 51 bench points and 40 second quarter points. Sadly, none of that mattered because the Wizards couldn’t contain the goddamn Hawks. Have some pride.

The Bucks just keep on winning. Bad teams, good teams, it doesn’t matter to the team with the best record in the NBA. An impressive 17-9 on the road as well, this was a pretty standard win for them. Ride Giannis most of the way and enjoy his ridiculous near triple double

then comes everyone else

They actually didn’t get much from their bench but it wasn’t all that needed. The Bucks really opened up this game in the third quarter dropping 36, and it’s not as if they shot the ball all that well, but when you have MVP Giannis and elite defense like they played in this game, that’s how you secure a 4-1 road trip. They’ve now won 4 in a row, are 9-1 over their last 10 and have a 2 game lead over TOR for the top spot in the East. As we’ve said before, this team is a wagon and should be treated as such until further notice.

For BKN, just when it looked like they were turning a corner, the Nets have since lost 3 straight and are suddenly back in a fight with CHA for the 6th seed. They can pretty much give up on a top 5 seed as they trail IND by 7 games, and it’s certainly hard to beat a team like MIL when you come out and shoot 32/11%. The 5-42 from deep certainly hurts, and really outside of D’Angelo Russell there was really nothing else to show

No shame in losing to the Bucks, but man did they lay an egg.

Finally a close game! Don’t rule the Pacers out just yet! They’ve won 2 in a row, are tied with PHI who plays TOR tonight, and sure it was the Pelicans but you think Pacers fans care? They know they just need wins right now and they got it with great depth and defense. That’s their calling card and why they’ve had success this season. When things got close it was Darren Collison who rose to the occasion, he had a team high 22 points including 11 in the fourth quarter including some clutch buckets down the stretch

and the Pacers now move to 7-3 in games in which they have under 10 TOs (had 9) this season. Believe it or not they are tied for the second most road wins in the conference and who knows maybe they weathered the storm of not having Oladipo, enduring that 4 game slide, and is now going to be back to the team that looked like a top 4 caliber team. At least the Sixers don’t hope so.

For NO, you feel for Jrue Holiday who has to feel sort of stuck in NO knowing that the team is about to become really bad really quick. Good for him for not letting that mess with his game as he was great in this one despite the loss

But when you’re talking NO, the main story has to be what we’re seeing from Jahlil OKafor. It’s not that he simply has a pulse, but he’s DOMINATING

Who needs AD amirite? Sure they couldn’t buy a three and turned it over a billion times, but they fought in the fourth quarter to make this a game and again, they are getting real production from Okafor! Crazy to think this kid couldn’t see the floor with any of his other stops, yet is putting up 25/12 essentially all the time as a Pelican? That may be the weirdest part of this entire season.

Yeah, not one person is shocked by this result. If anything the shock is that it wasn’t more of a blowout. As expected it was mostly Harden and CP3 who combined for 62 of the 118

It’s true, Harden’s defense has improved whether you want to admit it or not. Those are the facts.

For PHX, look give them credit, they kept this game close for the first half. Certainly better than I expected and a large part of that was due to the play of Josh Jackson and Devin Booker

Crazy what Jackson can do when he’s actually engaged and given the opportunity, and I think moving him to the starting lineup is a big reason why. It also helps when you can get the type of production the Suns got from Kelly Oubre Jr off the bench who had 23

he really seems to be embracing his role in PHX, but at the end of the day they got their much needed 11th straight loss to keep pace with the Knicks and keep a 1.0 game lead over CLE for the 2nd spot. CHI isn’t that far behind, so I wouldn’t expect anything to change over the next few months. The Suns know what they’re doing.

You forget that despite the Spurs turning around their season, they are still reallllllly bad on the road. Like 10-16 bad. Last night they couldn’t really buy a bucket with 42/28% spliuts, and really outside of LMA and DeRozan nobody else played all that well

Veyr un-Spurs like to give up 127 points and the beatdown started immediately with a 37 point Kings first quarter. They were able to claw back with a big second quarter of their own, only to give it right back giving up 35 in the third. That has to drive Pop mad. The good news for the Spurs is everyone else around them in the standings also lost, they are 7-3 over their last 10 and are still in the 6 seed tied with HOU. It’s not as if even the 4 seed is totally out of the question, but I think the fact that they have the most road losses of any top 8 team in the West is ultimately what’s going to limit their climb.

For SAC, watch out for the Baby Kings!

A career high for Bagley, 55/40% splits with 13 3PM, just 8 TOs, 60 (!!!!!!) bench points, this was a complete and utter beatdown. They sit just 0.5 games from the final playoff spot and 1.5 from the 7th spot and have won 3 in a row, so we could see this team in the top 8 by the end of the week. It’s been a great surprise season for SAC, and we’re seeing their young talent really blossom into real players. That’s great for them given they’ve been a joke for so long, and they’re quickly becoming a team worth staying up late for, especially when they play at home.

And that’s it! You’re now all caught up on everything that happened last night in the NBA. We’re back tonight with 8 more games and if you can’t watch em all just check back in the morning and I’ll bring you up to speed. Have a great Tuesday everybody!