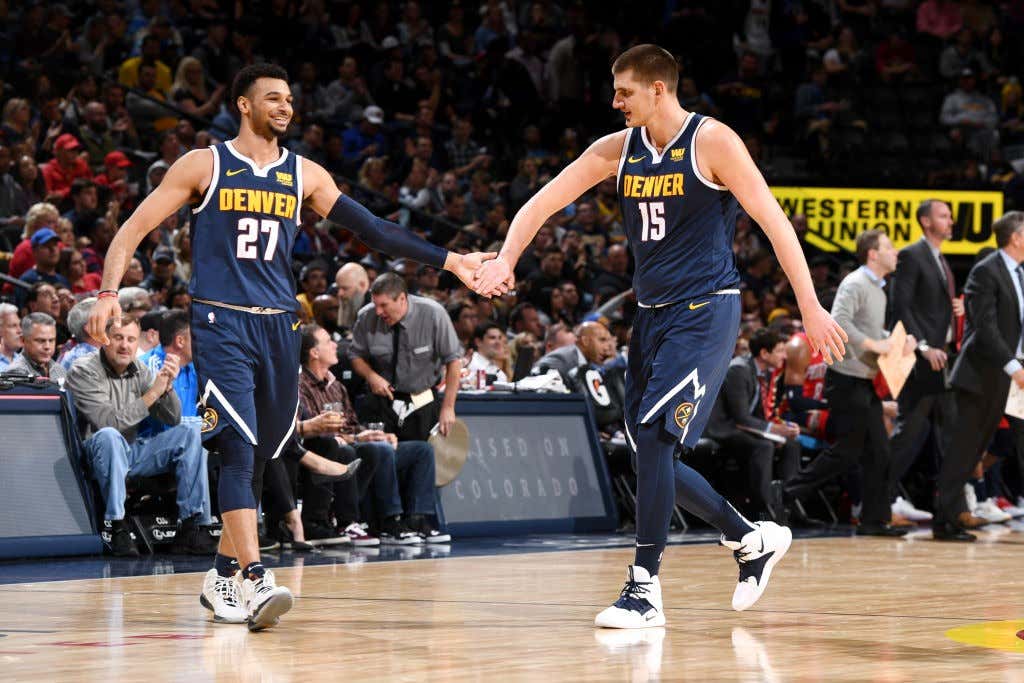 Now while I may be the Celtics guy around here, I also know that there are stoolies who are fans of a wide variety of teams in this league. Just like I did with the Pacers, I want to take the time and give those other fanbases their time in the sun. It’s only natural given how well they are playing that we now do the same for the Denver Nuggets. So if there are any Mile High stoolies out there, this is for you.

On November 5th Jamal Murray went crazy. He dropped an insane 48 points on the Boston Celtics to bring the Denver Nuggets to a very impressive 9-1 mark on the season. At the time the general NBA public wasn’t sure if it was safe to buy into the fact that the Nuggets may be for real, after all they did miss the playoffs the year before by losing the last regular season game at home against the Timberwolves. Their core is still super young, but when you look over that 10 game stretch and see wins over LAC/GS/NO/BOS, maybe we all should have been more serious about where they stood among the Western Conference contenders. The thing is, immediately after that win over Boston the Nuggets would go on to lose 6 of their next 7 and I think the immediate reaction was something along the lines of “see, this is why you shouldn’t have bought into their strong start”. It’s true, that slide was brutal, especially defensively where they were giving up 107.6 points a night and it’s only that low because Memphis only scored 89 points. By mid November they were 10-7 and considering this streak came with three home losses and a home win over the Hawks, I can get why there may have been some that remained skeptical. Here’s the thing, since that November 19th loss to the Bucks, the Nuggets have lost just 2 games. An Impressive 11-2 record over that stretch with wins over MIN/OKC (twice)/LAL/POR/TOR (twice) they are right back to their spot atop the Western Conference. In my opinion they validated their hot start and are doing it in a way that is pretty new to those that have watched them play over the years. When you think of Denver you think of a fast paced offense, one that takes advantage of the altitude and is loaded with young exciting talent. What you don’t often call them is an elite defensive team, so when we look at why this team is playing so well despite all the injuries they’ve had, you have to start on that end of the floor.

Last season, the Nuggets finished the year as the 23rd ranked defense, they were giving up 108 points a night and had a point differential of just +1.5. Sure they could score with anyone, but that did them no favors when they couldn’t get a stop to save their life. Ultimately it’s what probably cost them their playoff spot, so when they came into this season with basically the same roster, it was fair to call that a question mark. Well, all they’ve done is come out of the gates swinging on that end, with guys flying around at all times, doing it against some legit competition

Now 30 games into their season, it’s a completely different story on that end. It’s the Nuggets who are now owners of the best point differential in the West at +6.6, and a large part of that is how much better they are on defense. They give up the 2nd fewest points in the conference at 103.4 a night, they have the 4th best Drtg in the NBA at 104.5 and given the competition they see on a nightly basis (4th hardest schedule to date) you come to the conclusion that their improvement on the defensive end is the root of their success. To think they are doing this without some of their better defenders is pretty insane. As a team they lead the league in most games missed by an injured player yet they still keep on winning. As we know offenses can get hot and cold for stretches over the course of a long season, but the true sign of a legit team is how consistent their defense is. You look at all the real contenders and there are some that may not be at the top of the league in offense, but you’re damn sure they defend like nobody’s business. That is what the Nuggets have done so far and they’ve done it against about as legit a collection of talent as you can want. You don’t buy into them this season because of their offense, you do it because they’ve turned themselves into one of the best defensive teams in the league.

At the same time, they also have some pretty legit offensive talent that is only getting better. Nikola Jokic for sure won’t get the MVP love he deserves, you look at anyone’s MVP tracking and I don’t think they have him in the Top 5. Maybe it’s because he’s not some sort of marketing machine or anything like that, but for anyone who watches this team they know he’s playing at an MVP level. I would say last year was his “breakout” season, and this year he’s gone on to show that it was in no way a fluke. His 18.1/10.2/7.4/1.5 on 48% shooting is no fucking joke. Do you know how many centers in NBA history have ever averaged 7.4 or more assists? One. Wilt Chamberlain did it twice in back to back seasons from 1967-69. That’s it. That’s the list. Do you know how many players this season are currently doing what Jokic is doing in terms of his averages? One. Russell Westbrook. That’s it. That’s the list. So yeah I think it’s fair to say that what we’re seeing from Jokic is pretty rare not just for this season, but in the context of NBA history. Shit, NBA.com has him listed as 8th in MVP voting behind people like Embiid/Paul George/Curry etc. The latest odds I saw had Jokic at 100/1 with guys like Damian Lillard/Kemba Walker having better odds. How does that make any sense?

The thing is, we’ve also seen Jokic play the best defense of his career this season. His Drtg is down to 102 which is the best we’ve seen, his advanced defensive metrics are solid, and considering that was the one giant hole in his game, any progress there was going to make a huge difference.

As a team the Nuggets currently have the 11th best offense in the league and they do that because they are great at moving the ball. An AST% of 64.7% which ranks 3rd in the league, the beauty of their success is that the ball does not stick. They are not a team that relies heavily on isolation as they are 6th in total passes per game at 308.7, just slightly out of the top 5, and their 26.9 assists per night ranks 3rd in the NBA. So just think about that for a second. You have a team playing elite level defense on one end, and then on the other they are one of the better passing teams in the entire NBA. If you’re looking for a reason to buy into this team, how is that not it? Good defense and good ball movement are not two fluke areas, they are in fact the two areas we see the most successful teams strive in.

Looking ahead, with the amount of talent they are poised to get back with Millsap, Garry Harris, Will Barton, Isaiah Thomas, Michael Porter Jr, once you add legit depth to this team they’re going to be even better. Right now their bench shoots 48% as a group which is good for second in the NBA, so just imagine what that looks like when guys are healthy, rotations are figured out and roles are finalized. If both Jokic and Jamal Murray continue to take leaps on both ends and you add in even more talent, why can’t this team make a run at the WCF? They’re 5-0 in their division that consists of OKC/POR, and they are 13-4 against the Western Conference while currently being tied for the longest active winning streak. In my opinion, they absolutely could since we know they can survive even if they get hit with injuries.

Back in mid November it made sense to be a little skeptical of what you were seeing when it came to the Nuggets. But through everything they have proved to us that their improvement is not a fluke, that they can beat the best of the best and they can do it on a consistent basis. If that isn’t the definition of a contender then I don’t know what is.